Share All sharing options for: Attendance Woes in Oklahoma City

On the ice, the Oklahoma City Barons are off to a roaring start (especially if we pretend that first game never happened). They sit near the top of the Conference with a 4-1-1 record and are tied for the Conference lead with a +7 goal differential. Granted, the team is doing it mostly with percentages (they've been outshot by an average of 5.7 shots per game), but they're winning, and hey, winning is fun.

The problem, then, seems to be that Oklahomans don't think Barons' hockey is much fun. With the NBA going through an indefinite lockout, it seemed like the Barons would be one of the beneficiaries of the Thunder missing games, but early returns suggest a much different story.

In the following chart, we'll look at a three-game rolling average for attendance at Barons' regular season home games both this season and last: 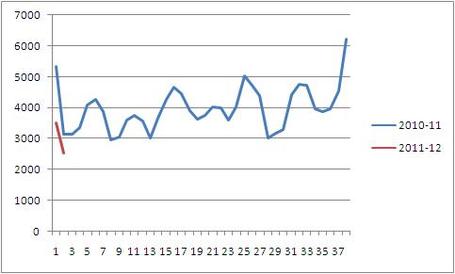 In terms of individual dates, the Barons have announced attendance of less than 2,700 people at each of their last three home games. Last season, the team had less than 2,700 just twice, and one of those was the Oklahoma City Blizzard game, which had an announced attendance of 2,005. That hints at what the problem might be for this year's team, namely, a smaller season ticket base (the low so far in 2011-12 is 2,287, which I'd have to think includes a lot more walk-up than the Blizzard game of 2010-11).

The team has averaged just 3,279 so far, which puts them second to last in the league and would have placed them second to last in the league last year too. With the Barons losing ground already, their future in Oklahoma City is probably in doubt once the original five-year agreement with Prodigal Hockey expires. With that five-year agreement in place, there is, of course, plenty of time to turn things around, but the early returns in the team's second season are not promising.