Share All sharing options for: Oilers Beat Wild 1-0 Through 59 Minutes And 58 Seconds

Even without Jacques Lemaire, the Minnesota Wild rarely allow the Edmonton Oilers to score more than two goals.  Regardless of personnel, the Wild seem to have the ability to turn a game into a neutral zone snooze-fest, bereft of end-to-end play or scoring chances.  Tonight's game was a little different - there were chances, and there were a few rushes here and there, but it wasn't enthralling.  It was Minnesota Wild hockey.  And the Oilers were outdoing the Wild at their own game.  Until there was 1 second on the clock, that is.

The first period was high tempo, for a Wild game, that is.  Ryan Smyth was called for goaltender interference, though a number of replays showed Backstrom so far away from his goal that he may have been going for a line change when the contact took place.  Khabibulin made a couple of excellent saves on the ensuing power play, then wasn't tested for the rest of the period.  Shawn Horcoff pulled off a brilliant move on a 2-on-2 with Taylor Hall, dropping the puck behind to Hall and bulling his way to the net.  Both defensemen converged on Horcoff and Hall had both open ice and an enormous three-man screen to work with, but flubbed the puck..  The Oilers opened the scoring after Greg Zanon inexplicably chased a puck behind his net, turned, fell and fired a near-blind pass up the left boards.  Ryan Smyth was waiting for the pass, and through a perfect pass in front to Ryan Jones for the Burrows-like tap-in.  The sequence was strange - Zanon had no reason to hurry, and even though Louie DeBrusk called it a "great forecheck", Jones peeled off in the circles in front.  It was a clear HUA on Zanon.  Ben Eager goaded Brad Staubitz into a fight with a slash which concerns me.  Should Eager be the guy starting fights, just one month after a concussion?  He took three shots to the face from Staubitz before going down.

The second period was similar to the first, this time without the goal, but the Wild got selectively physical with the Oilers, namely with Linus Omark, Lennary Petrell and Anton Lander.  Lander especially drew Minnesota's ire - he was hit by four different Wild during the second, three of them late and Guillame Latendresse threw an obvious, though uncalled, elbow to Lander's face late in the second.  The second period was really Linus Omark's period.  We've seen how dominant he is with the puck on the cycle, and we've seen how well Magnus Paajarvi plays off of Omark's game, but now that Eric Belanger has figured out how to play with Omark, he's added second deep cycling forward to that line.  They controlled a couple of shifts and created scoring chances in the second, but couldn't cash.

The third period was a careful one for the Oilers.  Tom Renney went into serious match-up mode and tried to ride out a 1-0 lead.  The Oilers surrendered chances to the Wild, and weren't generating much in the third themselves.  Renney stapled the Hall-Hopkins-Eberle line to the bench for the last seven minutes of the game and chose to send Lander and Petrell over the boards with Smyth, Horcoff or Belanger instead.  Khabibulin kept knocking pucks down and covering them up for faceoffs and the whole strategy was working.  Until Khabibulin decided it was time for a bad goal with 1.2 seconds left and allowed Dany Heatley to poke a puck in to tie the game.

They beat the Flames for 54 minutes.  They beat the Wild for 59 minutes and 58 seconds.  Bring on the narratives about "learning to win", "killer instinct", and "putting games away". 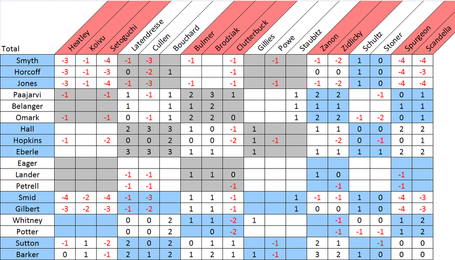 Tom Renney did a masterful job of playing match-ups in this one.  He spent his night trying to use the five man combination of Smyth-Horcoff-Jones / Smid-Gilbert against Mikko Koivu's line, even if it was a faceoff in the offensive zone.  He also started Horcoff between Hall and Eberle for a defensive zone faceoff, thereby keeping Ryan Nugent-Hopkins off of the ice in his own zone where he's been very weak through the first five.

Dany Heatley was a thorn in the Oilers' side all night long.  He had a couple of dangerous chances early and led the Wild with 7 shots. I also counted 4 takeaways by Heatley, but the Rexall place stats crew saw none.  And of course, he scored the game-tying goal with .5 second left.  He looked like the player he used to be.  Marvelous game.

Eric Belanger was 12-18 (67%) on faceoffs, including 6-8 (75%) in the defensive zone.  He had two excellent scoring chances and worked extremely well with Linus Omark and Magnus Paajarvi.

Shawn Horcoff was 10-20 (50%) on faceoffs and played 22:14 through the end of regulation, including 19:35 at even strength.  He played nearly 12 minutes against Heatley and Setoguchi at even strength.  Tom Renney is leaning on the center to do all of the heavy lifting.

Magnus Paajarvi was very good tonight.  He was skating hard (and faster than everyone on the ice) and he was letting the puck fly when he had the opportunity, tying for the team lead in shots with 4.  He wasn't exposed in his own end, even after taking so many defensive zone faceoffs with Belanger.  It looks like he's on pace to become one of the most dangerous two-way forwards in the game.

Early in the game, Ladislav Smid treated the puck like he found Denis Grebeshkov's old stash.  He fumbled the puck and flubbed passes.  He missed assignments and struggled to keep his mark.  Things got much better in the third, but he should stay away from 37's locker from now on.

Pierre Marc Bouchard is now 27 years old.  How long is he going to need protected zonestarts?

The Andy Sutton - Cam Barker experiment should end now. If they aren't the two slowest defensemen in the league, they are damned close. They lose nearly every icing race and are nothing more than traffic cones when opponents are entering the zone.  They both need a skilled, fleet of foot partner and instead have each other.  Renney is working his tail off to protect them and even with cherry assignments, they're still getting shelled.

One-goal game with two minutes left and the fans are doing the wave. Ridiculous.

I blame the loss on the wave.