Let me take you back to a better time. March 12, 2006. The Oilers were tied with the Anaheim Ducks for 8th place in the Western Conference. The team's new acquisitions, Sergei Samsonov and Dwayne Roloson were settling in and the excitement of a talented team with depth at all positions was sweeping Edmonton. The top line of Shawn Horcoff, Ryan Smyth and Ales Hemsky was generating more than 2.5 points per game and Chris Pronger, Jaroslav Spacek and Jason Smith led a veteran defense.

The team had a top ten penalty kill, and the power play was supposed to get better with the addition of Samsonov. The power play wasn't terrible, mind you, it ranked 14th in the NHL at 18.14%, the highest numbers for the Oilers in both categories since the lockout.

The last time the Oilers have a top half power play, it was Ryan Smyth down low, Shawn Horcoff on the weak side, Ales Hemsky controlling play from the half wall and Chris Pronger and Jaro Spacek on the blueline. This all came to mind last night after watching Taylor Hall's power play goal. After the jump, I'll explain why.

During that time, the Oilers controlled the puck through Ryan Smyth's puck retrieval, Ales Hemsky's puck skills, and the opponent's fear of Chris Pronger's slapshot. The power play was on display below, against the Minnesota Wild on March 12, 2006.

While the setup isn't the same as Taylor Hall's goal last night, three key aspects of the attack are the same. First, after Jarret Stoll keeps the puck in at the right point, he slides it over he slides the puck to Chris Pronger who doesn't immediately look for a shot.  Instead, he pushes the puck down low to Ales Hemsky. 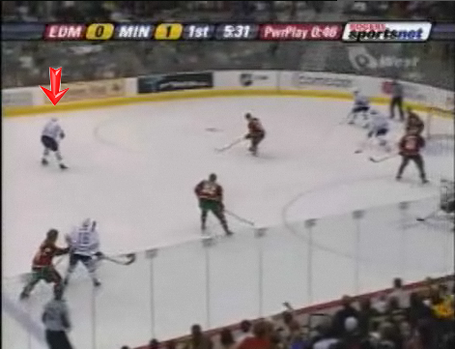 Hemsky isn't looking to set up a shot from a defenseman, as has been the Oilers' custom since September 2007, rather he's looking to make a play in the chance area.  Ryan Smyth heads to the top of the crease and Shawn Horcoff slides backdoor to the far post. 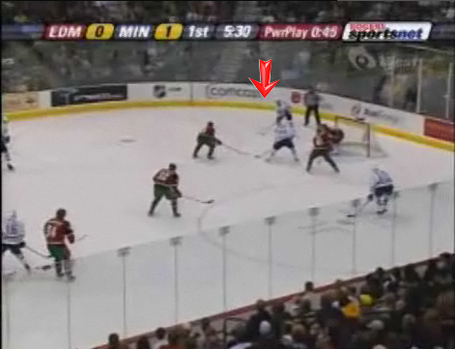 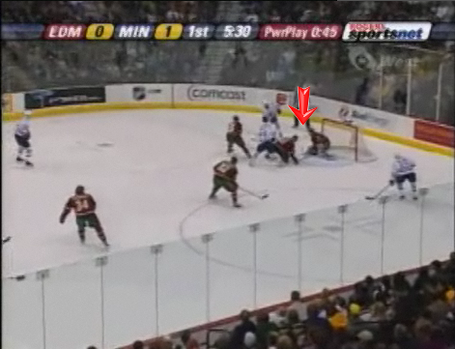 Hemsky takes the opportunity to slide the puck through the crease to Horcoff for the goal. 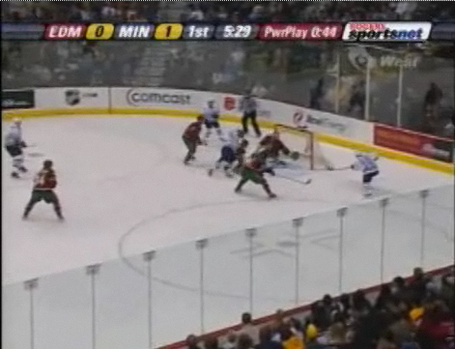 Now compare that to Taylor Hall's goal last night against the Predators. 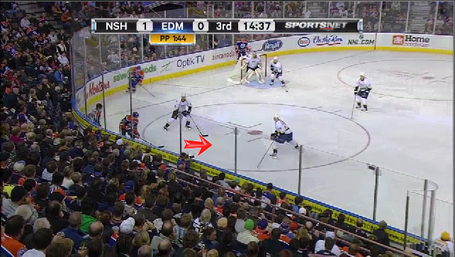 Horcoff heads to the top of the crease, a la Ryan Smyth, while Taylor Hall swoops around the far side post, a la Shawn Horcoff. 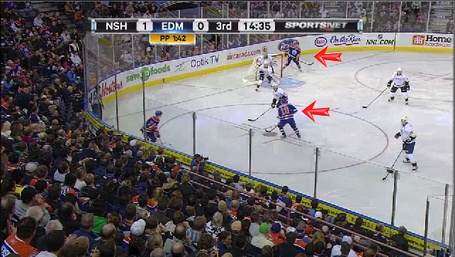 Look at the freeze frame below and compare it to the freeze frame from five years ago at 5:30.  The strong side defender has stepped towards Nugent-Hopkins playing the role of Hemsky, Horcoff is drifting to the top of the paint and Hall is sliding up the above the far post.  Look at the defender.  Stick down on the ice to take the pass to Hall away, but he's also got to account for Horcoff in the crease. 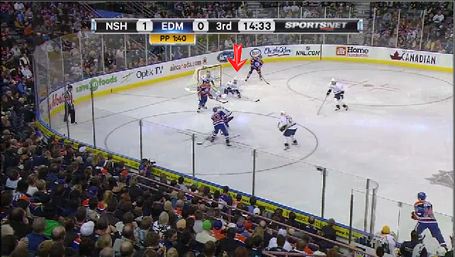 Horcoff is standing in Smyth's old spot as the pass goes through to Hall for the shot and the goal. 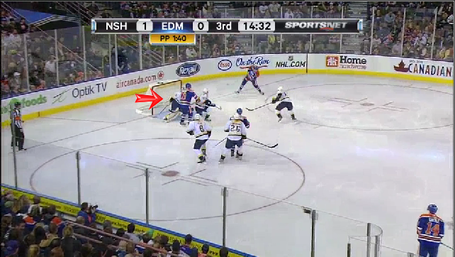 Relying on defensemen to bomb the puck to the net might be sexy and it might cause the crowd in Montreal to well up in anticipation, but the power play is better off attacking the weaknesses of the defense, especially by isolating the two defenders down low.  Like Chris Pronger proved five years ago, a weak-side pass to an open defenseman is not a bad third or fourth option with a man advantage.