Share All sharing options for: Ladislav Smid Breakouts And Why He Needs Tom Gilbert Or Jeff Petry

When I wrote about Ladislav Smid in the Winter Top 25 Under 25, I noted the stark contrast in his play when he's paired with different types of partners:

"...but there's a clear trend.  Give Smid a partner capable of handling the puck and pushing it up the ice via skating ability or passing ability and Smid is a bonafide NHL defender.  Pair him with Steve Staios, Kurtis Foster, or Jason Strudwick and the results are brutal."

He needs a puck-moving partner, a defender capable of handling the puck and the workload involved in getting it out of the zone. Like Lubomir Visnovsky in 2009, Tom Gilbert and Jeff Petry gave a real boost to Smid's underlying numbers when either one was paired with him:

Smid and Theo Peckham were especially terrible when paired together.  In fact, they both played their worst hockey when they were on the ice together.

The numbers say that Smid needs a certain type of partner and Peckham isn't it.  So it came as no surprise to see Smid struggle to handle the puck in the season opener - he was paired with Peckham.  It was easy to find evidence to match the numbers - after the jump we'll break down two mistakes that plague Smid when he's the primary caretaker of the puck.

Both of these examples were taken from the Oilers' season opener against Pittsburgh.  Click to enlarge all photos.

The first example came early in the second period at five-on-five.  Smid set up behind the net and the Oilers set up a breakout.  The Oilers have Ryan Nugent-Hopkins, Jordan Eberle and Ryan Jones up front with Smid and Theo Peckham on the blueline.  The Penguins have Richard Park, Craig Adams and Steve MacIntyre up front with Kris Letang and Deryk Engelland behind them.  This is a matchup of a mish-mash of Oilers' forwards with their second pairing against the Pens' fourth line with their second pairing. 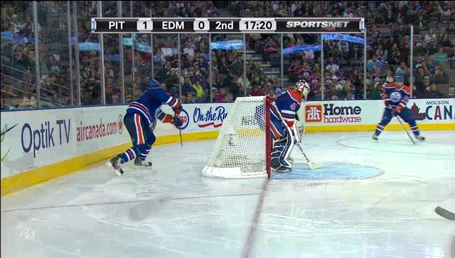 Even before he elects to make the breakout pass, given Smid's positioning, he has few options.  I've highlighted those options in yellow in the rink diagram below.  He can make a crisp pass to a player to his left below the faceoff dot or he can go for the Ladislav Smid - Steve Staios patented hard around breakout.  He can also turn to his right and try the hard around.  He could also choose to skate a stride or two to his left to change the angle or begin to skate the puck up the ice.

But he's already committed to his breakout and his target is Theo Peckham, a wonderfully able bruiser, but also a defenseman lacking in abilities when it comes to moving the puck, especially under pressure. Click on the first photo to get a larger view.  The stick blade in the bottom right belongs to Ryan Nugent-Hopkins.  He's coming back for the puck, but Steve MacIntyre trails close behind him.  Peckham is being stalked by Richard Park.  Smid chooses to make his pass far too early and from a stationary position behind the net.  This allows the Penguins, especially Park, to get an early read on the play and jump into the forecheck. 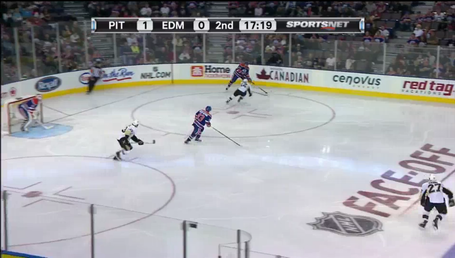 Smid gives the puck to Peckham who has a converging Park on top of him as the puck arrives. A more adept passer might have been able to get out of this, but this is a difficult spot for anyone, especially a left-handed defenseman.  Peckham realizes he's in imminent danger and gets rid of the puck quickly to the center of the ice towards Nugent-Hopkins, who shook MacIntyre's forecheck.  But Smid's forced pass and Peckham's positioning allows Craig Adams to get an early read on the play.  In the picture above, he's #27 in white, moving towards the open ice and the passing lane Peckham presumes he has.  In order for this to work, Peckham has to be perfect under pressure.  He's got to get the puck around Park's stick check and through his body to Nugent-Hopkins.  If he puts the puck behind him, MacIntyre steals.  If he leads his centre too much, Adams now has a play on the puck. 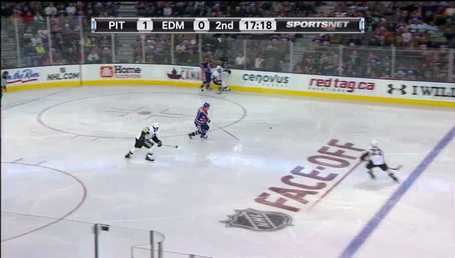 Enlarge the picture above and you can see that Peckham led Nugent-Hopkins by a full stride too much.  All he has to do is keep moving and Adams' momentum will carry him to the puck before Hopkins arrives. 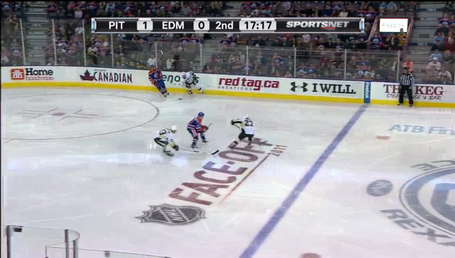 Adams steals the puck and an oncoming Nugent-Hopkins attempts to make a play on the puck. 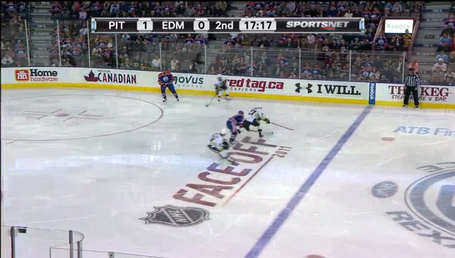 The second example occurred during a 4-on-4 after Smid retreated to his own zone to chase an errant puck.  The Oilers have Taylor Hall and Ales Hemsky with Ladislav Smid and Cam Barker on the ice.  Barker is as infamous for his puck skills as Theo Peckham is, maybe moreso.  The Penguins have Richard Park, Matt Cooke, Matt Niskanen and Kris Letang countering.  Smid is set up behind the net again.  In the picture below you can see Smid behind the net with Matt Cooke on the forecheck in front of the net.  Ales Hemsky is making the turn in the far corner.  If you're paying attention you'll note that this setup is suspiciously familiar. 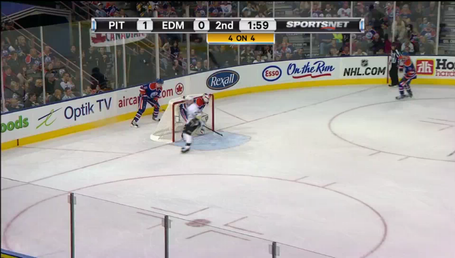 As Hemsky crosses in front, Taylor Hall circles back to the far corner. 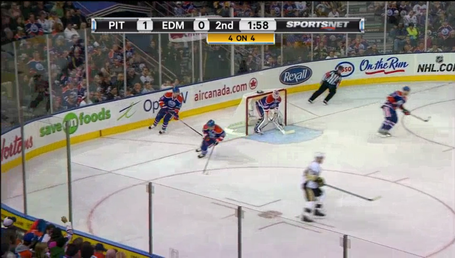 In the picture above, Hemsky is starting up Smid's right side boards and Hall is starting up the slot on the left.  Cooke has peeled off and is watching a line change behind him.  Smid has his head up and notices this and begins his skate out. 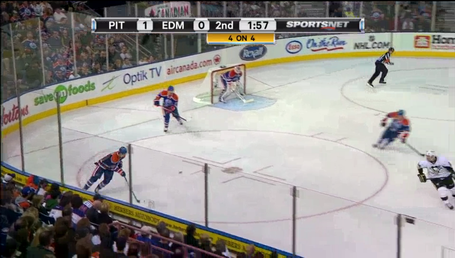 However, Smid keeps his body angled toward the turning Hemsky the entire time, effectively signaling to the rest of the players on the ice that Hemsky is getting the puck.  The puck leaves his stick three feet in front of his goal line to a vulnerable target.  Cooke has turned his attention back to Smid and by turning back to the play is in the perfect position to attack on the forecheck.  Cooke is now forechecking the Penguins one-on-three, but he has the advantage because of Smid's early commitment to the soft pass to Hemsky on the boards. 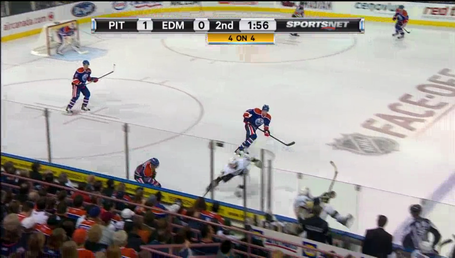 Hemsky receives the pass and has less than a stride to make a play as Cooke converges.  Hall is accelerating out of the zone, but because of the angle Smid gave Hemsky and Cooke's line towards Hemsky, there's no way to get the puck to Hall.  Cooke steals the puck even though he was outnumbered. 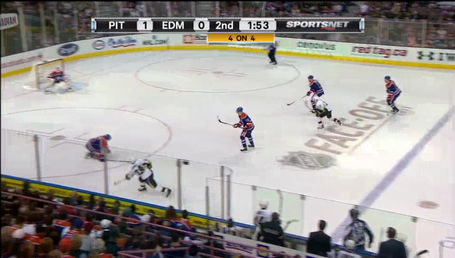 Cookie blasts a slapshot at the net and Smid, who went from trailer to last man back in a couple of seconds has no choice but to block the shot.  The result: 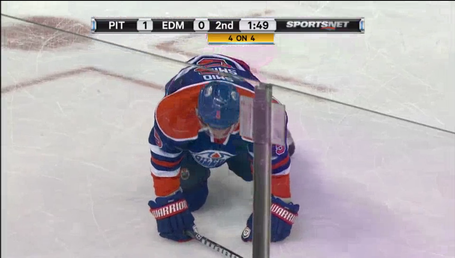 Smid rightfully sacrificed his body, but it was unnecessary.   With the Pens committed to a line change and one forechecker in against Smid and two supporting forwards, Smid must skate the puck up the ice and let his teammates get in better position to receive a pass and move into the neutral or offensive zone.

So we've got anecdotal evidence for those who don't believe the data, and we've got evidence for those who don't believe anecdotes.  Ladislav Smid desperately needs a partner with superior abilities to move the puck up the ice, whether that's by passing, skating or stick-handling.  When he can rely on that type of partner, he's an effective defenseman.  When he is relied upon for breakouts and exits, his game falls apart.  I saw multiple game recaps laud Smid for his shot-blocking, but it was Smid creating some of those situations and worse.

The Oilers have a significant problem.  If they move Jeff Petry up to play with Smid and give him someone to rely on, they're left with a Cam Barker - Theo Peckham third pairing, a pairing that will be just as poor, if not worse, than Peckham - Smid.  Ryan Whitney's return should help to alleviate some of these issues, but if Tom Renney chooses to send Jeff Petry to the press box, the Oilers are still short a needed defenseman.