Yesterday, I spent some time looking at all of the forwards drafted in 2010 using Gabriel Desjardins' NHL equivalencies; today, I'm going to look at all of the forwards who were drafted in 2009.  For the Oilers, that includes Magnus Paajarvi, Anton Lander, Toni Rajala, and Cameron Abney.  For the first three, offense is a pretty important indicator of future success.  Paajarvi was taken near the top of the class, so he's expected to provide top level offense; for Lander, offense has been one of the big question marks, so it will be good to see how he stacks up against his draft peers; and for Rajala, offense will need to be his calling card if he's ever going to make it to the NHL.  As for Abney... well, a comparison with his peers shows us just how bad that pick really was.

Before I go ahead and put up the chart, a bit more explanation is needed.  Firstly, not all of the players drafted in 2009 were the same age.  Several players had already passed through the draft at least once (and sometimes twice).  All of these older players are included in the chart but are marked in yellow.  Those who were drafted as overagers in 2010 are also included with "N/A" written in the "Draft Number" column.  If 2009 was their first year of eligibility, the yellow highlighting disappears.  The "Draft Number" column itself is also not the player's actual draft position but the player's draft position among forwards.  So, for example, Magnus Paajarvi was drafted by the Oilers 10th overall but was the 7th forward to be drafted, so his "Draft Number" in the chart is "7".  The "team" column is for the team that drafted the player, rather than the player who holds his rights; more often than not it's the same club, but I felt like I should point that out..  I've broken the chart into four portions to make it easier to read, but it's still quite small, so if you're old like Bruce, you can click on the chart to enlarge it. 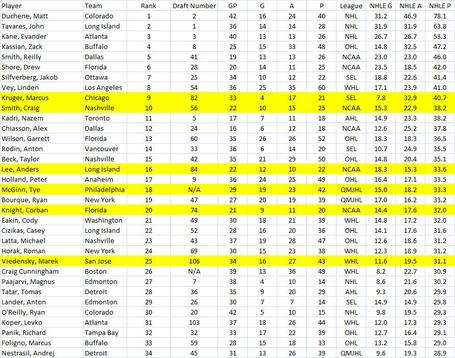 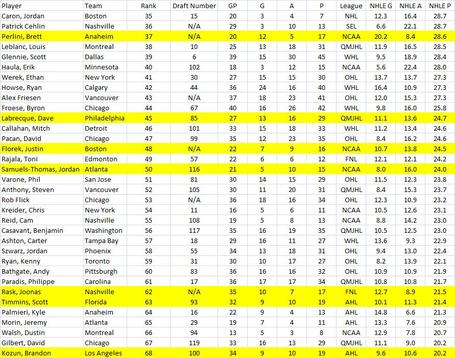 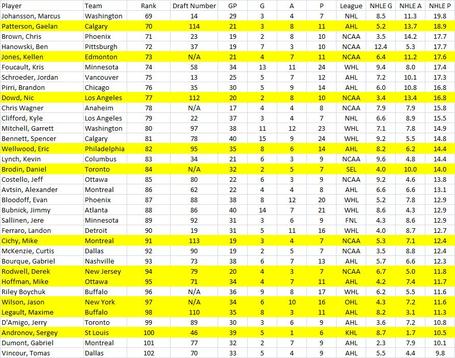 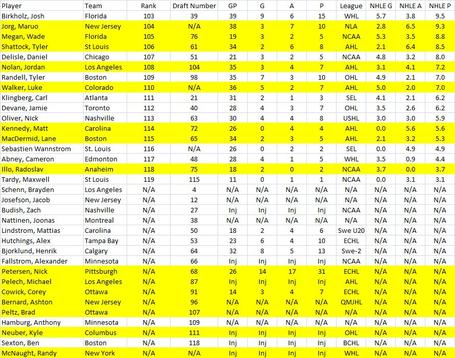 I should note off the top that there are a few highly touted prospects that will be found at the very bottom of the chart simply because they haven't played many games in any one league so far this year (I set a ten-game minimum).  Brayden Scheen and Jacob Josefson both missed that cut-off partially because they've played some games in the NHL.  Neither of them did all that well offensively, but then, neither of them was given all that much opportunity either.  Josefson hasn't played much because of injury, and Schenn has just bounced around a lot, although he did tie the record for most points in the WJC's a week or so ago, so it's probably not fair to focus on the lack of offense over nine NHL games.  For me, that's one of the big weaknesses of these comparisons.  When players are moving up to a new league, there's often a period of adjustment, and their numbers fall while they take time to adjust, something that's happening all over the place on this list.

Oiler fans can certainly see it happening when they scroll down looking for Magnus Paajarvi!  It's true that Paajarvi has struggled so far in his rookie season, but is he really the 27th best offensive prospect in the class?  No, sir.  Other players who were in the top twenty at the end of last season but have struggled in a tougher league include Jerry D'Amigo (who moved from the NCAA to the AHL), Brandon Pirri (NCAA to AHL), Marcus Johansson (SEL to NHL), Gabriel Dumont (QMJHL to AHL), Mike Hoffman (OHL to AHL), and Brandon Kozun (WHL to AHL).  Stepping up a level can be tough, and for some players it takes time to improve.

But not everyone eventually establishes himself, and the players who are struggling to get results in the same league they played in last season are perhaps cause for concern.  When the 2009 draft was underway, there was some discussion about the Oilers taking Scott Glennie, something that I'm glad hasn't come to pass.  Glennie is now in his fourth WHL season, but isn't dominating offensively in the way that you'd hope (as compared to guys like Zack Kassian and Linden Vey).  Carter Ashton and Landon Ferraro are two other pretty high picks who are really struggling to get offensive results in junior.  In the NCAA, former high schooler Chris Kreider is still having trouble establishing himself on a scoring line, and Carl Klingberg is hitting below the Mendoza line in Sweden.  That's not to say that these players can't eventually establish themselves, but you'd hope that by this time they'd have adjusted to the league's difficulty, and won the confidence of the coach to play in offensive situations with success.