Share All sharing options for: This Season, Last Season, What's the Difference?

In my first comparison of this season to last season we saw that there Oilers are scoring less goals and allowing far more goals against in the first 20 games of this season versus last season. What about now, how do the second set of 20 games compare?

The second quarters for each season have nearly the same record. This season for games 21-40 the Oilers are 8-9-3 while last season for the same games the Oilers were 8-10-2. It was the second quarter that seemed to secure the notion for many that the Oilers team were not going to see any post-season play. In fact, the game that convinced me the season was over last year was on December 21st, a 7-2 loss to the St. Louis Blues. This year, well I've thought this was a lottery team from the get go even if I do toy with the idea of the Oilers landing 7th from the bottom from time to time. Ultimately though the west is a very tight conference and anything is possible. Look at the New Jersey Devils. They sign Ilya Kovalchuk and get worse?!

For a quick refresher, last season at this point the newspapers were talking about one Jim Vandermeer banking a shot off Steve Staios' knee in a game against the Phoenix Coyotes. Other big news was Sheldon Souray, who is all but missing from any news reports these days. Last January, news broke that Souray was willing to waive his no trade clause to facilitate a trade. If only things had worked out that a deal was made and a lot of frustration for the Oilers and the fans was avoided. Otherwise the Oilers of last season went through a depressing 7 game winless streak. This season, same deal. Going forward I can't help but expect that we might keep seeing similar results.

Let's have a quick reminder who what the first 20 goals looked like for each season: 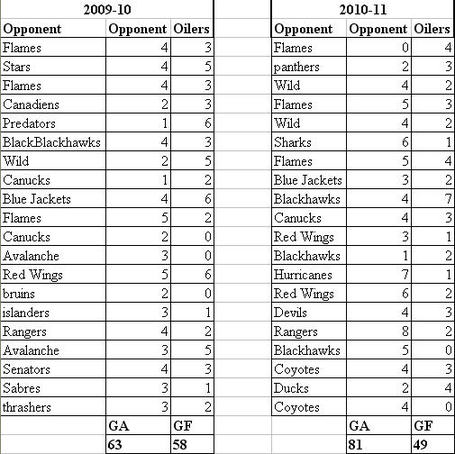 Now here is a look at the second set of 20 games: 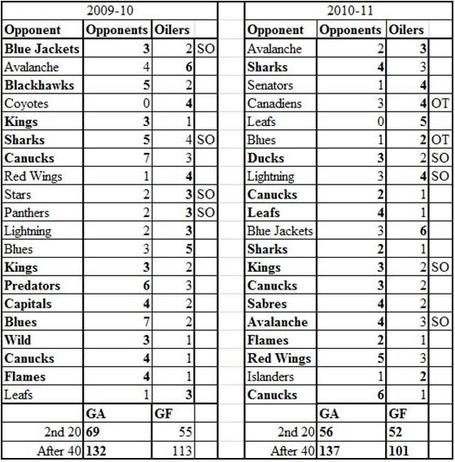 Again we see fairly comparable competition over the course of the 20 games. Also, we can see that the Oilers are still scoring less goals, but the ray of sunshine is that there are fewer goals against in the second set of 20 games! Overall however, the Oilers still have a larger goal differential than they did last year.

In the second quarter of the season here are some interesting numbers:

The Oilers were not shut out in the second quarter in either season.

The Oilers shut out one opponent in each season in the second quarter.

The biggest goal margin in a loss was 5 goals which happened in each season. Last season also saw a loss by 4 goals which did not happen this year. Losses by 3 goals happened 4 times last season, but only once this season.

How is it that the Oilers' last season lost by a wider margin last year but still scored more goals? That's right, the Oilers last year had more games where they won by more than one goal too. Games won by two or more goals for this season was 3 while last year was 5.

What do you think? I know many out there are hoping that this team is making a push for the playoffs. I will point out that the seven game losing skid happened as soon as Renney mentioned the playoffs. If you want to point any karmic fingers, perhaps that is the direction you should take. For those of you who are calling for ELPH or exciting last place hockey we did at least have Omark's shootout goal in the second quarter of this year. There are some glimmers of playoff and lottery hopes for each of us.

If this season has you down, and you can't help but feel a little discouraged with the Oilers, try to remember; we've been in pretty much the exact situation for a year now.