A lot of Oiler fans are giddy with the early returns from the forwards selected in the 2010 entry draft: Taylor Hall is providing entertainment on a nightly basis, Tyler Pitlick is having a fine season in the WHL, Curtis Hamilton is healthy and even made Canada's WJC squad, and Ryan Martindale has been among the OHL's scoring leaders for most of the season.  But how do these four players compare with the rest of their draft class?  After the jump, I'll compare all of the forwards who were drafted in 2010 using Gabriel Desjardins' NHL equivalencies, which should give us a pretty good idea of where these four prospects are offensively relative to their peers.

Before I go ahead and put up the chart, a bit more explanation is needed.  Firstly, not all of the players drafted in 2009 were the same age.  Several players had already passed through the draft at least once (and sometimes twice).  All of these older players are included in the chart but are marked in yellow.  Second, the "Draft Number" column is not the player's actual draft position but the player's position among forwards.  So, for example, Tyler Pitlick was drafted by the Edmonton Oilers 31st overall, but was the 22nd forward to be drafted, so his "Draft Number" in the chart is "22".  I've broken the chart into four portions to make it easier to read, but it's still quite small, so if you're old like Bruce, you can click on the chart to enlarge it. 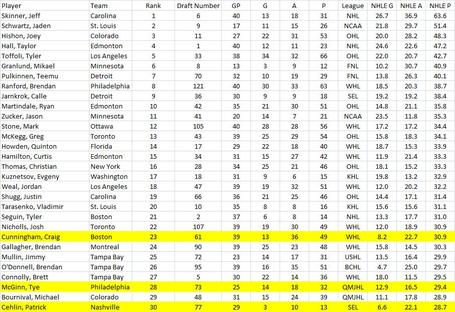 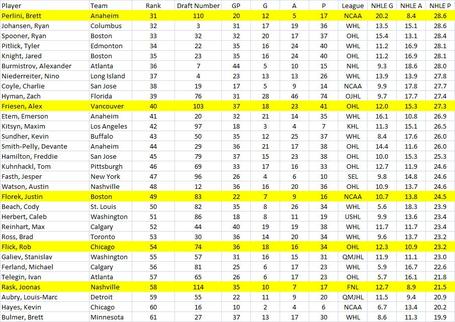 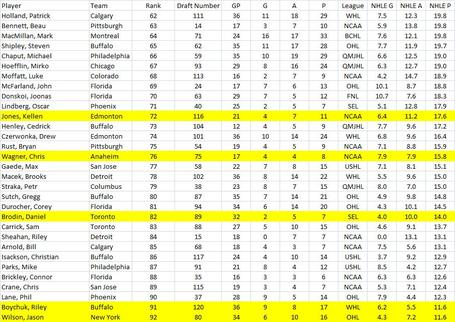 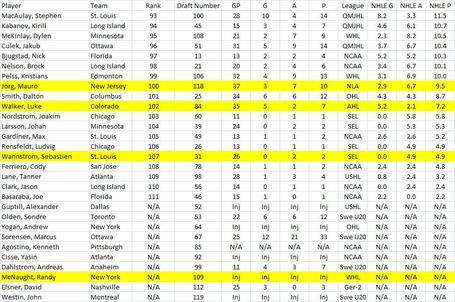 The ten guys on top are an interesting group.  Jeff Skinner and Taylor Hall were highly regarded and both are doing very well in the NHL so far this season, but it's the other men on the list that pique my interest.  The Red Wings have a couple of players who are showing well in Scandinavia.  Both of them are somewhat undersized, but they also have some obvious offensive talent.  This is great news for them because their first-round selection, Riley Sheahan, has had a rough year at Notre Dame.  Other high picks are also struggling in the NCAA (guys like Nick Bjugstad and Brock Nelson), but those players are freshmen, whereas Sheahan is a sophomore.  If it's tough to get playing time as a freshman, that's understandable, but an NHL first-rounder should be able to establish himself offensively in the NCAA in his second year.

One guy who hasn't had any trouble establishing himself is Jaden Schwartz.  Colorado College isn't playing a soft schedule, so those numbers are pretty darn impressive.  Like Detroit's Scandinavians, Schwartz is a little on the small side, and he was injured during the WJC's too, so the resume isn't perfect, but his first half season in the NCAA has been very impressive indeed.  The man just behind Schwartz is another relatively small scoring forward who's had problems with injuries - the Avalanche took quite a bit of flack for drafting Joey Hishon as high as they did, but so far, he looks awfully good in junior.

A couple of Ottawa 67's have also been very impressive.  Tyler Toffoli and Ryan Martindale both make the top ten on this list after falling to the second and third round in the draft respectively.  The fact that both of them are there is each man's problem in a nutshell.  The thought is that each player has problems that may prevent him from doing well at the next level, even if they don't preclude them from being dominant together in junior.  The knocks on Martindale?  Things like effort, consistency, passion, and a certain je ne sais quoi that scouts just don't see.  Now, maybe it's because I've heard that Dustin Penner is the laziest man on the planet about one thousand one hundred and eighty one times, but I honestly have a hard time getting worked up about that stuff when the offensive results are there and the guy in question is a 6'3'' center.

Another pair of juniors not having as much success is in Portland where Nino Niederreiter and Ryan Johansen have fallen pretty far.  The only other top ten pick on the second page is Alexander Burmistrov who's (a) playing in the NHL and (b) getting no power play time whatsoever (much like Evander Kane last season).  By all accounts, he's surpassing expectations.  Niederreiter and Johansen?  Not so much.  The season is of course only half over, but that's one pairing I expected to be doing a lot better than they actually are.

And as for the excitement in Edmonton, it would seem to be warranted.  The Oilers are the only team with three players in the top fifteen and the only team with four players in the top forty.  Pitlick's ranking of 34th could be a little bit troubling, but as Sum has shown, he's scoring a goodly number of those points at EV, which is likely where he'll see most of his minutes on an NHL team regardless.  It looks to me like there's good reason to be excited!