Sorry folks, I'm in another excellent mood tonight. I saw our Edmonton Oilers at home and I survived some poor road conditions to make it back to Calgary in time to write up my thoughts on last night's game. True, the Oilers didn't win but if I somehow found some positives from Saturday night's game, this game was a lot easier to be excited or happy about, even if the Oilers lost by two goals instead of one. As we all know the final score doesn't always tell the whole story of the game.

First of all, the Oilers played the Detroit Red Wings last night. The Red Wings are at the top of the league right now. The Red Wings have a lot of skill and play a hard, gritty, but often simple game. The Oilers are struggling for identity (other than young and inexperienced) and consistency. These are two different teams is what I am trying to get across. The Red Wings seem to have little trouble being an intimidating team to play against, so matter where they are. The Wings seem to feel as much at home on the road as they do in that temple of hockey that is the Joe Louis Arena.

The winning column challenged Oilers were hoping that their losing streak would end at six, but sadly no. This losing streak has continued to seven games with only one win in the last ten. This is only the second game of 2011, but the Oilers are still looking for their first win of the new calendar year. Where do I start talking about the positives? Well, I'm glad you asked. How about right now?

First off, I think that most of the H.O.P.E. team showed up. True, Jordan Eberle is out for likely the next 10 or so days with an ankle sprain so maybe it was the H.O.P. team, but you get the point. This was not the team that was sorely embarrassed by their provincial rivals. This team had more shots on goal, carried the puck, battled in the corners and played till the final buzzer.

Down by one early in the game, the Oilers did not bury their heads and give up. No, Liam Reddox from behind the net and seemingly with eyes in the back of his head made a clear and direct pass to Gilbert Brule. Brule just had to backhand it into the net to tie the score and wake the crowd, and that's exactly what he did. What a relief to see a tie game and not wait 20 minutes of play to see it happen. Also, the Oilers had a shot on net before the clock hit seven minutes. This was a completely different game from the last one.

In the dying seconds of the first period Ladislav Smid took a boarding penalty, but the team was tied, not behind going into the second period so there wasn't the same sense of panic that you normally feel. Well at least there wasn't for me and I can't really explain why. My gut feeling was right, the Oilers' PK is taking strides forward at this point. They are still allowing shots on goal, but for this penalty kill it was actually only one shot.

The next Detroit goal was by the bubble gum popping Todd Bertuzzi. Who thought that Bertuzzi would still have such an impact on the game? I think that because Detroit has so much skill and depth that Bertuzzi is able to relax and just play his game. I don't think that Bertuzzi needs to be carrying the team because everyone they have is capable and proven. The fact that they have so much talent in the NHL means that they are able to take their time with their farm team and provide their rookies with some amazing icons to learn from. Could you imagine our rookies learning from Pavel Datsyuk? Of course you can't, but it would be something. 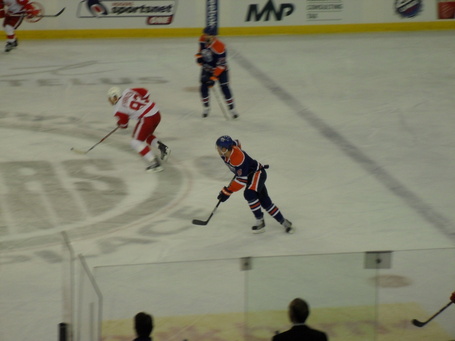 The next goal was by Kris Draper and the Red Wings was a soft goal and likely wouldn't have happened had Kurtis Foster been in the right position to cover his man. But, not much we can do now but move on. The Oilers were down by only one, they successfully killed off a second penalty in the period putting them at 100% for this game. I think that's a major improvement. The Oilers cannot go into every game down by one because of their ineffective penalty kill. I'll take this game's pk effort and hope that I will see more of the same going forward.

Before the second period ended, it did appear as though Colin Fraser had reduced the Red Wings lead to one. The puck went off the crossbar and straight down. The spotlight went on, but the goal lights did not go on and play continued. The fans were more than disappointed, we were sure that that one was in. We also thought that Gagner should have had a penalty shot just minutes before too though. Clearly, what do the fans know right? Mistakes happen and we still had the third period to look forward to.

Can I say how much I am enjoying watching Linus Omark play? Yes, I agree that he still has a lot to learn, but I love watching his make use of the ice he has, watching him make space and carrying that puck into the offensive zone and keep it and tonight he was maintaining puck control against the Red Wings, even if it didn't result in a goal, and even if he did cough up the puck eventually he seems to be using more size than he actually has. Omark must be thinking big, but it seems to be working for him. 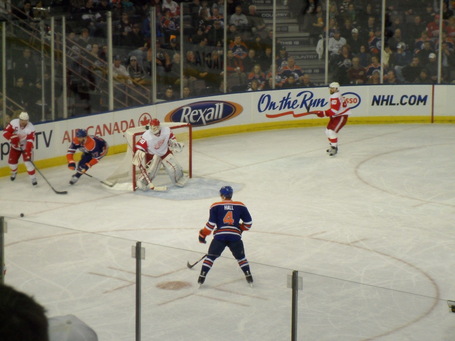 The third period started out well, with Theo Peckham or Teddy Peckman, whatever you prefer, made this once again a close game with his second NHL goal. You know what that goal did? It reminded the rest of the team just how close it was. The next goal was another Oilers' marker. Sam Gagner won the faceoff and scored the goal all in one play. Simply amazing to watch. This was truly a game. Well, for a couple of minutes fans were already talking shootout. Omark was up and we were more then excited to see what he would dream up for us tonight. Ya... we didn't quite get to see that. Bertuzzi struck again, and then Detroit up and comer Darren Helm made it 5-3 Detroit. 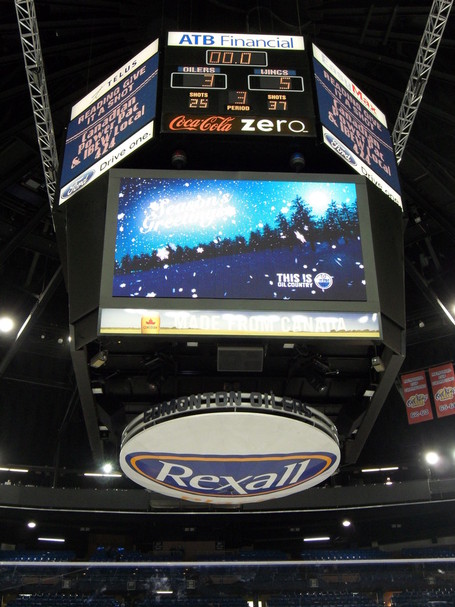 So, like I said, the Oilers added another loss to the column. You know what else the Oilers were able to add to though? Shots on net. The Oilers were able to get 25 shots tonight. Nope, that was not a typo. The Oilers had 25 shots against Chris Osgood and the Detroit Red Wings. The Oilers also had three goals tonight and as I said earlier, they didn't allow a power play goal. I think that this season is about the little things and small victories. Maybe I'm too easily pleased but I walked out of Rexall happy, overall, with the results and anxious to see what this team will do against the suddenly surging, and injured Rick DiPietro New York Islanders team.