This is Ty Rattie of the Portland Winterhawks. He leads his team in points and is fifth in the entire Western Hockey league. He has soft hands and oozes creativity. He is said to have a good understanding of the game and is often praised for his on-ice vision. Yet, I will be surprised if he ends up as a top ten selection in next June's draft. He has only average size and his skating is more shifty than dynamic. But the thing that will keep him away from the cream of the draft class is his lack of consistency. In the first quarter of the season he showed a lot of promise by scoring almost at will (he scored 34 points in his first 21 games). Now, that pace seemed unsustainable, so some drop in scoring was to be expected, but even having considered that, his 16 points over the next 19 games is still rather underwhelming. One of the reasons may be Nino Niederreiter's absence (it doesn't coincide exactly with the last 19 games, but since Nino left for the WJC's, Rattie's scoring hasn't really improved, perhaps because he's more of a target). If the first 20 games are regarded as a hot streak, then the next 20 should be held as a cold one. I am ready to give him the benefit of the doubt and say that his true scoring levels lie somewhere in between those two streaks, but I certainly wouldn't be prepared to put him in the upper echelon of this season's prospects. 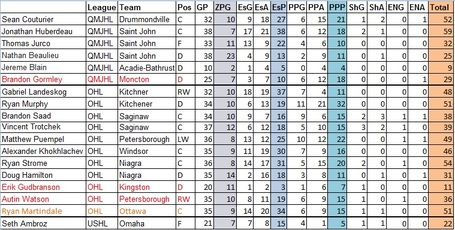 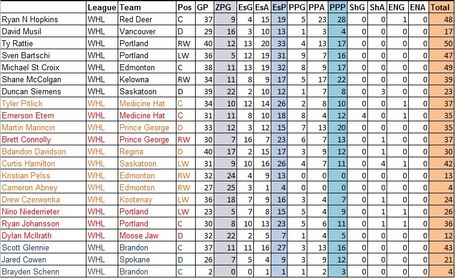