Share All sharing options for: Weekend Update: All Star Break

The NHL is currently on their mid-season All-Star break this weekend. At this time many high profile stars would like to take some time out and visit family or take a vacation. Some still get to do that, while others make their appearances in the All-Star game. This year the Edmonton Oilers were to send Ales Hemsky to the All-Star game, and rookies Taylor Hall and Jordan Eberle to the skills competition. As you have likely heard over and over again, both Hemsky and Eberle gracefully declined their invitations to heal from their respective injuries. Taylor Hall will still be at the weekend's events in Raleigh and now perhaps it is down to Hall to wear the Guardian Project "The Oiler" costume. It might be interesting to see how the Guardian Project all comes together.

Oilers games this week featured three teams from the sunny south and seemingly a bit of everything. Sunday night saw the Oilers play the Nashville Predators at home, and fall short in the shootout, losing 3-2. Tuesday night the Oilers were in Glendale Arizona to play the Phoenix Coyotes. Thanks to Dustin Penner and his late third period goal, the Oilers were able to win in regulation 4-3. Wednesday night the Oilers finished off their road trip in Dallas Texas. Despite the four fights, the many shots on net and the passionate play, goaltending and a lack of goals scored seemed to do the Oilers in, losing 3-1 to the Stars.

Wednesday January 26th was also Wayne Gretzky's 50th birthday. The entire NHL world seemed to come together for the event. Mark Messier had turned 50 earlier this month, and the Oilers had a feature for him on their webpage. Fans were happy. The Great One turns 50 however, and sports networks show special features and interviews and everyone wants to talk about Gretzky. I love it. I think that Gretzky helps to bridge divides and his fame spans oceans. I don't think it matters where you grew up or where you lived, if you grew up hockey, you know who Wayne Gretzky is. Even German Olympic hockey players likely know who The Great One is and maybe even dreamed at one point of their live what it would be like to come near any of his hockey records. Maybe not, but this is Gretzky. What does Gretzky want to do with the rest of his years? Gretzky knows that he is still young, and he is grateful for his health and fitness he still enjoys and the sky seems to be the living. Many people would love to see Gretzky become involved with another NHL team. It would make the headlines, and it would help a team make money. No matter what Gretzky does, I wish him a happy healthy life.

Another ex-Oiler that fans still wish was playing for the Oilers is Mr. Doug Weight. Weight is currently still an Islander, but has not played many games (just 18 so far this year) with the club. From the sounds of things, Weight may be in New York for the foreseeable future, but possibly in a coaching position.

The Oilers had their annual skills competition last Saturday. As I suspected this was another year where the arena did not sell out. In 2008 however, every single seat in Rexall was sold out. Hopefully we will return to that kind of atmosphere. The crowd was still electric and loud. In the end Team White beat Team Orange, but everyone was a winner at the end of the afternoon. Money was raised for the Oilers' Community Foundation, the players were able to forget about the standings for a while and fans were able to have some fun and some laughs. Nikolai Khabibulin was not in attendance, due to undisclosed reasons. The stand in goalie was Oiler's goalie coach Frederic Chabot, who played for team white. In the final 3 on 3 drill with the last 30 seconds, Dubnyk threw his stick at Jean-Francois Jacques, then his glove. When the play moved to team white's end Dubnyk went to the bench for the extra attacker. The funny thing was that not just one skater left the bench, but rather the whole team,  and Dubnyk soon joined them to try to score the tying goal. Team White had no idea what was happening and didn't realise until the final buzzer. Overall, we had a wonderful Saturday afternoon.

Forward Ryan Jones has a twitter account now. You can follow the Oiler who loves to talk on the ice as he talks on the net if you so choose, @jonesry28. On Thursday, Jones answered a few questions which included questions about his hair. You see, two years ago while playing for the Nashville Predators, Jones grew his hair out only to cut it off for wigs for children who lost their hair during chemotherapy treatments and the Predators did a feature on him. During the answer period Jones did on Twitter, he did say that he is once again growing his hair for children's wigs. Just when I thought that hockey hair couldn't look any better on him, he went and proved me wrong. Jones also answered questions about his upcoming contract. He said he had no idea, but that he honestly loves it in Edmonton.

It was announced this week that the Oilers will play the Chicago Blackhawks in the 2011 pre-season in Saskatoon. There are a lot of Oilers fans in Saskatchewan, so that is great for them, but too bad for Oilers fans that would have liked to have seen the Blackhawks in pre-season action in Edmonton. It seems the Oilers only ever play the Panthers, Flames, Canucks and sometimes the Lightning. Oh well, it is only pre-season.

Sportsnet analyst Mark Spector went to Hershey to catch up with Sheldon Souray. Souray wants to stay healthy and play well enough that a team will want him. With one year remaining on his contract a salary of $4.5 million, but a salary cap of $5.4 I think that the market will still be very, very small. The Oilers will likely still be looking for somewhere for Souray to play out his contract next season.

Saturday January 29th is Michael Jackson night at Rexall when the Oil Kings take on the Prince Albert Raiders. The Oil Kings are the other oil in town. Tickets are affordable, it's good hockey and the team needs Edmonton's support.

It's nearly time to change the calendar, so here is Paajarvuary: 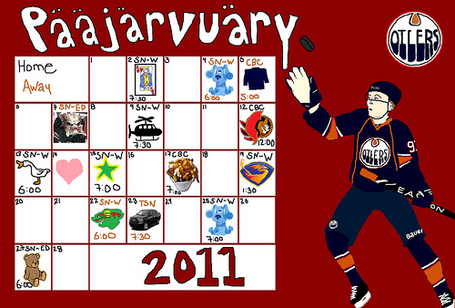 In NHL news, the Calgary Flames sent both Ales Kotalik and Craig Conroy to the AHL Abbotsford Heat. Both players cleared waiverd. Kotalik will likely play for the Heat while many are waiting to hear Conroy make his retirement decision soon. The Flames had to do something with their players returning from injury and with their current cap situation. It seems interim general manager Jay Feaster is not afraid to take chances. The change of scenery for the players must be making a difference as the team has now won four in a row. As a card carrying member of the ABC club, I hope that this secures them 9th place in the west.

The NHL All-Star teams were selected the same way we chose teams on the playground. The biggest news of course was that the Sedin twins were separated. This may be one of the more interesting story lines from the whole weekend. Can the bothers play against one another? Will they still score on their own?

Goaltender Ray Emry is back from his hip surgery and ready to try to make his NHL comeback. Emry has had quite the hockey past, and if he can turn his career around you can be sure that it would be quite the hockey book to add to any collection.

The charges have been dropped against the Toronto waffle tosser. The man will have to serve 5 hours of community service. I still don't understand what made the first incident seem like a good idea. Waffles. I would never want to walk around with frozen waffles in my pocket. Especially not to a hockey game. The waffles don't seem to represent Canada or Toronto, so it still just seems to be some random ridiculousness.

Is Nikolai Khabibulin still Oilers' #1, and should he be? - Cult of Hockey McCurdy

Oilers Defensive Prospects Among Best in the CHL. - E-Town's Greatest

The Oilers and one goal losses - Spilled Oil