Share All sharing options for: Weekend Update: The PP Drought Ends, But The Team Loses Hemsky

The Oilers this week saw the return of Shawn Horcoff but also the departure of Ales Hemsky. When will this team catch a break? Friday morning, Dan Tencer tweeted that Sam Gagner was not at practice because he also hit a rut in the ice at Rexall place Thursday night. Fantastic! Just what Oilers fans want to hear. At this point it has to be a concern for more than just casual Oilers' fans that this is not an uncommon occurrence. What I find strange is that it is only Oilers are being injured by ruts in the ice. I was unable to find reports of opposition players or even Oil Kings or other WHL players being injured due to the ice at Rexall. Something appears to be a foot. Is it the speed at which the Oilers play, maybe. Is it the experience level the players have, possibly but both are doubtful. We will get to the bottom of this.

Sunday night saw the Oilers complete their road trip in Anaheim. This was another loss, but by only one goal. The issue that plagued so many Oilers's fans about Sunday night's game was the sheer frustration fans felt watching the game. Tuesday night was a home game against the Minnesota Wild and as the score suggests was not a very close game despite the Oilers finally breaking their PP goal drought. Magnus Paajarvi scored the lone goal on the power play in the game that saw the Oilers lose 4-1 at home. The Oilers would need to bring a higher intensity level to Thursday night's game against the Dallas Stars. The Stars seemed to control the speed of the game with the Oilers struggling to take control. The Oilers out chanced the Stars but still lost 4-2, which included an empty net goal in the dying seconds of the game. Those shouldn't count when they are against the Oilers. The best part of Thursday night's game was seeing another Oilers up and comer score his first NHL goal. Congratulations to Jeff Petry, the first son of a pro baseball player to score an NHL goal.

Jordan Eberle is listed as day to day and has been skating with the team. There were rumours that Eberle would be skating Thursday night. Now, Oilers fans hope that he will be playing Sunday night against the Nashville Predators. Many Oilers fans young and old are surely hoping to see Eberle on the ice for the Oilers skills competition at noon at Rexall Place. The Skills Competition is an annual event that is light hearted and a chance for many Oilers fans to forget about the issues the team faces while playing other teams and concentrate on the players that make up the Oilers roster. The afternoon's events include a shooting accuracy competition, fastest skater, fastest shot, puck control, the shootout competition and a 3 on 3.

The Oilers made the news this week for reports that the team would like to be considered to play pre-season games in Europe. Although the travel sometimes has a negative effect on the start to some teams' seasons once they return, I think that this is an excellent opportunity for fans living abroad to be able to see live Oilers games but I can't help but laugh when I think that Bettman could be thinking that this will help make more NHL fans. People may watch the occasional special game like the Winter, or Outdoor Classic, but are these people that have never watched much hockey before now going to pick one of these teams and turn into a loyal fan? Not very likely. Your average sports fan who might become slightly interested in hockey, the NHL or even a team that they saw will not suddenly drop everything, re-arrange their plans and lives so that they can watch regular games and they are certainly not going to start spending their money on NHL merchandise rather than video games, other league's merchandise or, well anything.

Mark Messier turned 50 this week, and so Oilers fans were able to take an opportunity to remember some of the greatest Messier moments. Maybe I am slightly biased, but I truly believe Messier's best games were as an Oiler.

The Edmonton Oil Kings played three games this week including a 3-2 loss to the Moose Jaw Warriors and a 4-3 loss to the Kootenay Ice. Friday night was the much anticipated visit by the Hanson Brothers. The Hansons dressed and were in the starting lineup in Rexall Place. During the pregame skate the Hanson brothers could be seen talking with the officials and smiling to the crowd. During the anthem they stood at attention with their hands over their hearts. When the anthem was finished they crossed themselves and took their positions. As expected they were less than fair in the faceoff, hitting the opposition with their sticks. Then they bowled over the referee and skated to the net with the puck. One pushed over the goalie sending him sprawling and scored the first goal of the night. The crowd went wild! Unfortunately the rest of the night didn't go according to the script with the Oil Kings falling 6-3 to the Moose Jaw Warriors. 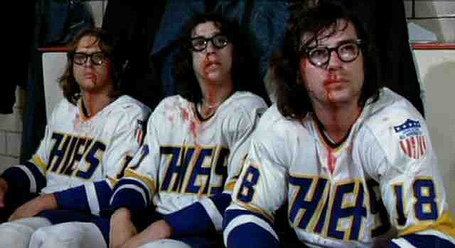 Saturday January 22nd the Oil Kings play the Medicine Hat Tigers or as Bruce McCurdy likes to refer to the them the Medicine Hat Tylers, a team that features Oilers prospects Tyler Bunz and Tyler Pitlick. If you are looking for some good local hockey at a reasonable rate, I will see you at Rexall place at 7pm. Yes, the other Oil in town is normally known as a family event as this is professional hockey that is affordable enough to take the family or a sports team to, but the Oil Kings want everyone to feel welcome. Earl's Restaurants gave away a gift card for a simple recipe trivia question, Kal-Tire gave away a $1000 gift certificate to a fan who had successfully answered a trivia question, and there was a Booster Juice Minute. In the Booster Juice minute, if the Oil Kings scored, everyone in the building would get a 2 for 1 coupon for Booster Juice. I get nothing from suggesting you give the Oil Kings a shot other than the satisfaction of possibly seeing you at a game or too. I like having another Edmonton team to cheer on when they make it to Calgary.

In NHL news, Evgeni Nabokov was released from his KHL team, the SKA St. Petersburg in December for what is reported as family reasons. The Detroit Red Wings have signed the goalie, but he will have to clear waivers first. So, if Nabokov is not claimed by a team (which may or may not be the New Jersey Devils) then Nabokov will be a Red Wing. If New Jersey picks up Nabokov they could turn around and trade Nabokov to any team except the Detroit Red Wings. However, if the Devils pick up Nabokov and then place him on waivers again, the Red Wings would be able to pick him up again. Who thought that this might just be a simple signing? I did, but the latest news is proving me wrong. I think that this also goes to show the value of a goaltender in this league.

Dean Lambardi made the news Friday morning for his post game comments surrounding a Phoenix Coyotes goal that was allowed. Lambardi stated "When the guy in Toronto making the decisions on the goals, in Ottawa and the one tonight, wanted the GM's job in L.A. and was not happy about not getting it, you have to assume you are going to get those type of calls." Very likely Lombardi will be fined and have his wrist slapped by the NHL for questioning the  decision. Lombardi does bring up a very valid point, people are human and many can't help but bear a grudge even once in a while. The LA Kings GM has apologized for his comments, but this will not be the last we hear of this event, especially when news broke that Lombardi was fined $50, 000 Friday afternoon. This is troubling when earlier in the week Curtis Glencross was fined $2500 for a dangerous hit that could have seriously injured someone. Lombardi may have seriously hurt someone's feelings, but I don't think that they two are in the same ballpark. Perhaps the general managers and coaches should all band together to form a union that might protect them from such severe fines.

In All-Star news, Ales Hemsky will miss the weekend due to his concussion and Jarome Iginla will miss due to a sick grandmother. Neither player will be replaced by another player from their respective teams. Here is where I think the NHL is failing. There is not much interest in the All-Star game versus say playoff hockey. It's not an exciting or believable game. It's an exhibition, but one where high profile stars still risk injury. This game should perhaps be played at the end of the the season, but then you have players that are tired and beat up from the Stanley Cup Finals and other players will have moved back to their homes sometimes overseas, and most will have begun their summer training. It doesn't seem that there is a good time for a game like this since at the beginning of the season the players don't want to risk injury that will delay the start of their season. With more and more high profile NHL stars not attending this weekend, or making comments that lead hockey fans to believe that they would rather do anything but play in the All-Star weekend I don't see this event gaining much popularity, Guardian project or not. I question hosting this game at all. Perhaps players would be more content with the idea of just having an All-Stars skills competition.

The Colorado Avalancheannounced that Peter Forsberg will be practicing with the team Saturday. Let the coming out of retirement talk and speculations begin now, keeping in mind that Forsberg has not played in the NHL since 2008.

Will Omark Step Up - Cult of Hockey Staples

After The Lawyers, Then We Take Out The Cats - Black Dog Hates Skunks

Instead of the All-Star Game… - Houses of the Hockey Moldovanyi

Camera Angles and Gimmicks - Houses of the Hockey Moldovanyi

Bourne Blog: The pressure to fight when your team's being murdered - Puck Daddy Bourne

Is a total ban on contact with the head unavoidable for the NHL? - Puck Daddy Wyshynski

Will we see 11 NHL teams change their jerseys next season? - Puck Daddy Wyshynksi