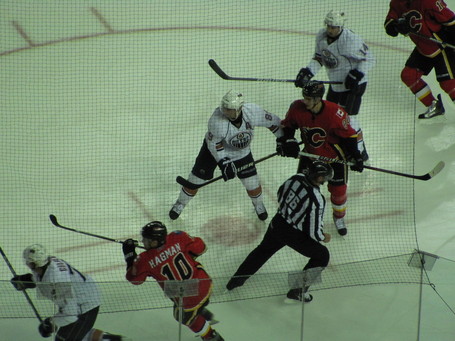 And he said: " Son, this world is rough,and if a man is gonna make it he's gotta be tough, and I knew I wouldn't be there to help you along."

Sam Gagner is an excellent example of what Malcolm Gladwell and Daniel Coyle have been trying to tell us. The theory is that opportunity deep practice and high level coaching / mentoring from a young age can provide a person with extrordinary skills that often are mistaken for innate talent.

Sam's dad is Dave Gagner. He was a high round draft pick, a very good (if not elite) NHL player, and since his playing days has been involved in coaching and scouting in both the CHL and NHL. Dave is also founded Custom Ice Rinks, Inc., a company that manufactures permanent and portable ice skating rinks. I only mention this because Sam has often spoke of his time spent on his home rink as a big factor in his development.

Lowetide often talks about comparables. He sites Doug Gilmour and Vincent Dampousse as the closest thing to Sammy. I have alway found these just a little bit off. The obvious comp to my way of thinking is none other than dear old Dad.

There has been alot of talk about how high the ceiling is for Sam. Some think he will never be the prototypical (but often not defined) 1st line center that all fans crave. Some talk of trading him while he is still worth something because he is too soft and doesn't score enough. Some want to give him time, he is only 21!

I thought it would be a good exercise to run through Daves career numbers and see how Sammy stacks up so far and where he might go in the future.

(note: I prorated Sammys production for this year).

The first thing that jumps out at you is Dave's development curve. He didn't see the NHL his first post draft year and then was up and down for the next 3 years. Overall, he spent twice as many games in the minors as he did in the show. Sammy got the promotion straight to the big leagues.

Sammy has produced at 0.65 points per game and Dave at 0.82. Considering the level of opposition they were each playing this has to be considered a wash if not an edge to Sammy.

Now the rest of Daves career.

One thing I find interesting is Dave's rise in penalty minutes that accompanies his establishing himself in the NHL. I did a quick check on hockeyfights.com to see if he was racking up majors. He has one or two a year against noted knuckle throwers like Paul Coffey and Mark Lamb, but it seems like his 100+ PMs a year are mostly minors.

So, a few of points in conclusion.

- Give Sammy another year or two before we write him off

- Maybe Sam should think about punching Paul Coffey in the face, or at least stepping up his aggression levels to carve a little more space.

- The Oilers only own his rights until he is 25 and can opt for UFA. If he holds to his Dads form, this will be the beginning of his most productive stretch.

- The Oilers could have owned these years cheaply if they had developed Sam at the same pace as his Dad.