In Scott's game thread, he said:

Except the Oilers outshot the Stars in the first two periods, and but for the empty-net goal to end the game, tied the Stars shots in the third period.  They also out-Fenwicked (is that a word?) the Stars tonight.  They wrecked the Stars on the chances toteboard.  It's strange to say this, but setting aside some individual matchups, the Oilers outplayed the Stars the entire evening.  In typical Oilers fashion, they sent on an extra attacker late, desperately trying to tie, but to no avail. 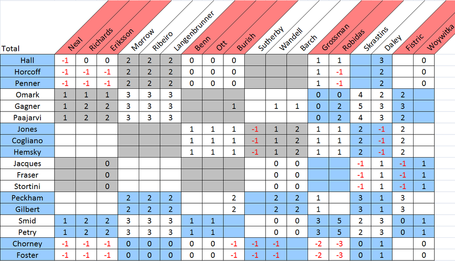 Each of the Jeff Petry / Ladislav Smid pairing had likely the best games of their career.  Petry is tall and lanky, but very athletic.  He moves like a forward and has better skating ability compared to a slew of Oiler forwards.  He was top-notch this evening, moving the puck well, passing well, and carrying it out of the zone.  Don't even take his goal into consideration and it was a fantastic game for him.  It showed exactly why he was logging 35 minutes a night at Michigan State and why everyone who sees him play is enamored with his skills.  Smid looked better than I think I've ever seen - and he's a guy about to play his 300th NHL game.  He was tough in his zone, he bounded into the offensive zone on a couple of pinches and managed to get back.  He was more physical in winning battles, not just taking punishment, and he used Petry really well.  I don't know who driving and who was riding shotgun, but I'd love to see the two of them play like that for the next 30+ games.

Sam Gagner, Linus Omark and Magnus Paajarvi seem to have figured each other out.  They still have an occasional hiccup now and then, but over the last few games they've dominated play.  Omark is like mini Dustin Penner on the boards, dragging the puck all around the goal line, fending off much larger defensemen, but maintaining possession.  He's also been a wonderful respite on the power play.  Paajarvi's skating ability has been showcased lately and I don't know if anyone in the league goes from blueline to blueline faster than Pajjan.

Tom Renney must change the penalty kill.  There has been no improvement at all from the Oilers when short-handed.  This is all on the coaching staff at this point.  If there was progress, I'd understand, but it's just...ugly. 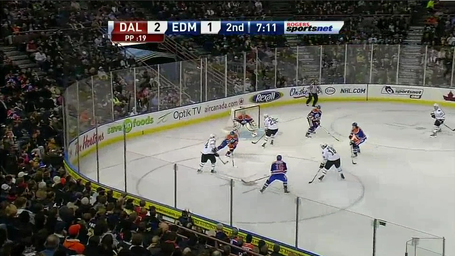 Without getting too technical, the penalty kill puked all over itself and it wasn't Nikolai Khabibulin's fault. On James Neal's goal from Jamie Benn, Neal wasn't the closest undefended Dallas player to the net.  Not only was the goal scorer completely undefended in the low slot, Steve Ott was standing all along undefended as well.  There were a couple of comments surrounding Edmonton's ability to control the opposition's shooting percentage the last time we discussed the penalty kill, but it's pretty plain to see the Oilers have no idea what they're doing on the ice when they are short-handed.  There's something very wrong with a penalty kill that regularly leaves two men alone in front of the goaltender.

Kurtis Foster's even strength play has become hazardous to watch.  Watching him work on the Stars even strength goals could drive a man to the bottle.  On both goals he was nothing more than a spectator, watching and reaching in a sad attempt to stop the play.  I realize he was brought in to replace Souray's power play ability and I even lauded the signing at the time, but he's just a mess at even strength.  Theo Peckham, Ladislav Smid and now Jeff Petry have all moved above him on the depth chart and if Alex Plante wants to give it a whirl, I'm sure he'll make it too.  I was asked in the gamethread what I thought Foster could fetch at the deadline -- I don't know if he has any trade value at all right now.