Oilers Give Up New Year's Resolutions Less Than 24 Hours In, Lose 2-1 to Flames

Share All sharing options for: Oilers Give Up New Year's Resolutions Less Than 24 Hours In, Lose 2-1 to Flames

As the clock struck midnight on December 31st and my friends and I were drinking champagne, my mind started to wander. I thought of my own resolutions; whether or not I had eggs in the fridge and then of course what would the Oilers decide to change in the coming year. I figured that it had to be shots of course and likely to win more face-offs. The way I see it, you need to score goals to win games. You have to take shots to score goals and you can even take it a couple of steps further. You need to have puck possession to take shots, and you need to win face-offs (sometimes) for puck possession. Yes, the Oilers need to win more face-offs and take more shots. This has to be the solution to making 2011 better. The first game of the new year didn't quite shake out how the fans would have hoped.

You know why I love to go home to Edmonton? It's a nice escape from Flames fans. In Calgary, they are absolutely everywhere. When you least suspect it, one will come out of nowhere. I don't know why I forget just how many Flames fans are currently in Edmonton. Maybe some are in town visiting relatives like I am, or maybe they made the trek out for the game. Either way there were a lot of Flames fans in the crowd.

The best Flames fans had to be those that were paired with an Oilers fan. You would see pairs of men who were completely dressed up for the game be it in flag capes or full hockey gear. The other fun thing to see was the overall treatment that both sets of fans had for each other. Of course I am basing this on my own personal experience at the game. If you saw something else, I do believe you. What I saw tonight was very interesting. The Flames had just seen the departure of long  time GM Darryl Sutter and are anxiously anticipating the new era of the Calgary Flames. The Edmonton Oilers are in the midst of a rebuild and know the agony of loss and defeat. Both Alberta teams have found themselves at the bottom of the Western Conference at some point this year. Is it possible that we have found common ground? That this is a (hopefully) brief period of time where Flames and Oilers fans are able to bury the hatchet and try to play nice for a little while? It just may be folks. Of course there were still the "Calgary Sucks" chants, but I wasn't talking about a full on twilight zone change. I'm just trying to suggest that maybe some Grinch hearts have grown this holiday season. This was the first battle of Alberta that I have attended where I didn't see a single fist fight, or heated argument. No one was taken out by either security or the police (that I saw). It was a whole new experience for me. 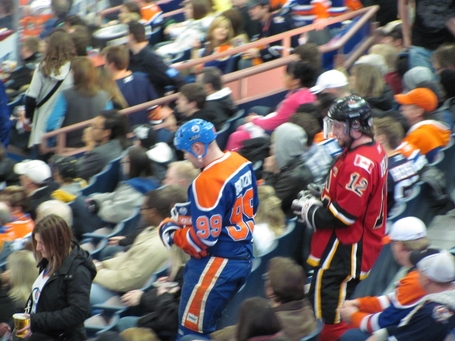 How did the actual hockey go I'm sure is what you would like to know now. Well.... remember what I said about shots?

From the opening face-off, fans eagerly awaited the first shot on net. Who would be the first Oiler to score in the new year? We waited, and we waited, then we waited some more for a shot. Seven minutes into the period it happened. That's right, seven minutes before Dustin Penner got a shot on Miikka Kiprusoff. On the other end, the Flames had had six shots. Fans around me, let out a collective sigh and started to come back to life after that point, but it was short lived. Yup, the wait went on for the next scoring opportunity. Before long, you realised that it wasn't funny, it was nearly seven minutes before we saw another shot. That's right we were more than halfway through the period and we had two shots. People around me asked "What is the record low for shots?" Eleven I quickly responded, which was met with groans and various comments that I shall not repeat here.

In the meantime, the Flames' Tim Jackman scored the game's first goal. The next entertainment for Oilers' fans didn't occur again until Nikolai Khabibulin was called for delay of game. On the opposite end of the arena we weren't too sure why that was. Thank goodness for cell phones! Khabibulin was called for delay of game for playing the puck outside of the trapezoid. The best, and third, scoring opportunity of the period for the Oilers came from Taylor Hall who served Khabibulin's penalty as well as one of his own just before the conclusion of the first period.

As I started to wonder why I had made it down for this game instead of watching it at home and driving out in the morning I went to visit Scott Reynolds who was only a couple of sections away. This is another reason why going to games is more fun than watching them at home, you can make it a social event. This was also my first NHL game since my trip to Raleigh and Detroit. I know most of you know this, but it killed me how long it took to move a few feet. This is just brutal! Foot traffic flowed in Raleigh because the crowd was so small. In Detroit, the crowd was at least as big as it is in Rexall and there were no problems moving let alone looking at photos and statues. Something has to be done about this folks, it is just painful!

The second period went much like the first. The Oilers were out played, out muscled and out chanced. People were yawning and I swear to you I was starting to hear crickets. All that changed when Ryan Jones came charging in and scored the Oilers first goal of the season! That woke up the crowd. Many of us had been too dazed to notice that Jordan Eberle had left the ice earlier on in the period. We were noticing that he was not on the ice, but no one could recall when he left. Once again, thank you my trusted cell phone and my wonderful friends in other places (you know who you are) because we were able to learn that Eberle had left the ice due to an ankle injury. That doesn't sound good for Oilers fans, another ankle injury. 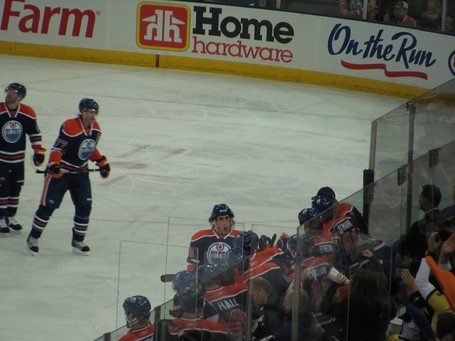 The second period soon turned even worse for the Oilers as  Olli Jokinen scored another one for the Flames and the shots stood at 26-8 with that 11 shot record looking to be a challenge to achieve. That would turn out to be it for the scoring for the rest of the game.... So... ya... some of you may just stop reading at this point I figure.

If you stuck with this article, wanted to see it through, the third period was pretty dull. The Oilers did seem to come alive slightly, but it wasn't enough. They did manage to get nine shots in the next 20 minutes but only a couple of those actually felt like they might be goals. There were very few "Ooohs" in the crowd, and an awful lot of yawning.

The Oilers overall showed some brief moments of entertainment and exciting hockey, but overall, this game was really boring. Shawn Belle did show some grit on the ice, which helped add to the brief moments of entertainment. Dustin Penner was definetly the scape goat for the people I was sitting with. Nothing he did was right, well until he parked himself in front of the net. Seeing that he didn't manage to score though, I'm not sure that you can say things really turned around in the minds of the fans. Ryan O`Marra also made his presence felt, I thought and Taylor Hall was definitely in this game to win it. 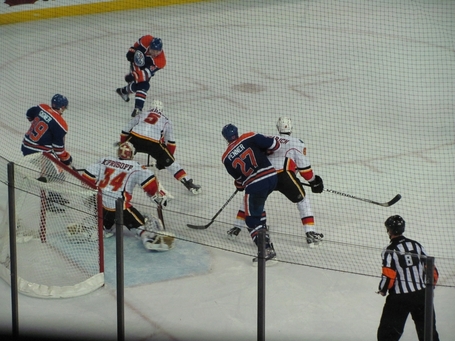 Going forward I hope that this team can watch their ankles and try to stay out of casts. The next battle will be Tuesday night against the Detroit Red Wings. Playing against a team that is also struggling to find wins is one thing, but the Detroit Red Wings is another team altogether. The Red Wings are currently tied with the Penguins for 53 points and league leaders. Let's see what happens with those resolutions now shall we?