The 2010 draft was probably one of the most important drafts in the history of the Edmonton Oilers. It marked a new low for the organization which boasts a rich history and spends a lot of time celebrating it. But that draft gave us clarity and Taylor hall, both of which are supposed to take the organization out of the gutter which Lowebellini have skillfully dumped us in. While Taylor Hall is working hard and exceeding expectation, clarity is only taking us to another lottery finish. Not unlike 2010, the 2011 draft is a very important one for the organization as well.

If there is one person who is most informed in the business of hockey, it is TSN's Bob McKenzie. His end of the year prospect list is one of the most awaited and informative lists available to a hockey fan. His rankings are based on what the actual NHL scouts are saying, which makes his rankings all the more informative. For those who haven't read it yet, the list is here. It is an interesting list. Almost every player in the top 6 fills a need in the organization. Sean Couturier and Ryan Strome are the center with size and defensive acumen. Larsson and Hamilton are the potential top pairing D men with size. Landeskog is the gritty winger with enough skill to play in the top 6. It seems that we can do no wrong!

After the jump, we'll take a look at the full CHL update.  These are the year to date totals as of January 18th 2011. The situational scoring between the updates will be posted as fan posts for reference purposes. I have added Mark Mcneill of Prince Albert Raiders and Zach Phillips of Saint John Sea Dogs to the list. If you would like to see the situational scoring of any more prospects on a regular basis please let me know in the comments section. 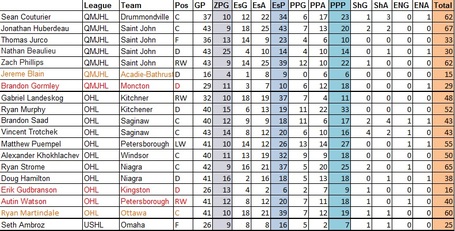 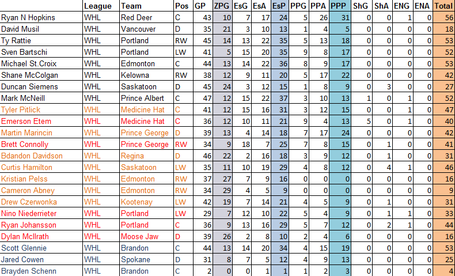 I am nonetheless catching the Oil Kings each time, and the club is starting to grow on me. It’s great that there are two "players of interest" for Oiler fans right here on the home team that I can see developing before my eyes. Pelss has come a long way already, and in more ways than one. While "love" might be a bit strong, I do "really like" the kid’s game and I’m really pulling for him. And over time you can’t help but start to notice guys like Mark Pysyk, Dylan Wruck, Michael St. Croix, Keegan Lowe, and here’s a name to watch, Griffin Reinhart. Better yet, don’t watch the name, get out to a game(s) and watch the player!

The Oil Kings aren't selling enough tickets. They should, because they are good and a very solid team. I have watched them live twice now and have been very entertained. Get on the LRT people and watch some fun hockey for cheap! Trust me Griffin Rienhart alone is worth the price of admission.