Ales Hemsky was removed from the game last night with a concussion. While his medical condition was a surprise to fans, it wasn't a surprise to the Edmonton media. Gene Principe, on the simply awe-inspiring Sportsnet intermission panel, said that Hemsky wasn't feeling well against Anaheim and expressed no surprise at all.

After the game, Tyler hit Twitter, exhorting his followers to hold the Edmonton Media's collective feet to the fire and find out what the actual story behind Hemsky's concussion, and how exactly was it common knowledge among the media, yet not among the Edmonton coaches or management. 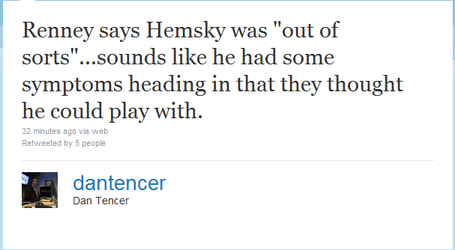 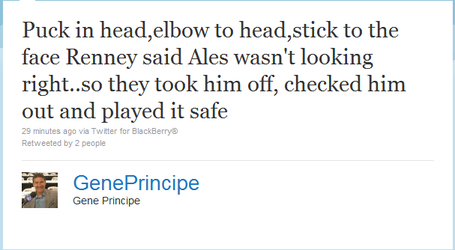 And finally, Joanne Ireland gets to the meat of the issue, though I'm not sure if Tencer and Principe purposefully obfuscated Renney's statements or not: 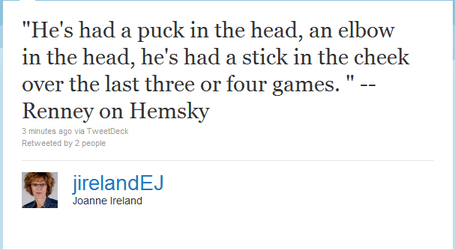 Jim Matheson exposed the issue this morning with the following quote:

"He’s had some symptoms before this game and the doctor looked at him and I don’t know what conclusion they’ve drawn."

As Tyler mentioned there is a cheekily-named Renney Protocol, but apparently that protocol doesn't apply to possibly debilitating brain injuries, only to knee injuries. To quote Tyler:

If we accept that a) the Renney Protocol prevents anybody from playing who "shouldn’t be in there" and that b) Shawn Horcoff was unable to play while c) Ales Hemsky, with widely known concussion symptoms, was, I think we have to ask the question: is Shawn Horcoff dead?

The team knew that something wasn't right with Hemsky, yet chose not to sit him, or, as Renney said, even find the conclusions from the doctor. Though even Renney's answer is confusing. If Hemsky has taken a number of shots to the head and it was noticeable by the media and the team (enough to involve the team doctor), evaluating Hemsky's condition is as simple as running the concussion baseline tests to determine if Hemsky was impaired. If Hemsky had the baseline test and the Oilers didn't wait for the results before sending him back on to the ice, the NHLPA should be enraged. Figuring all of this out isn't new medicine either. NFL teams have been using "The Steelers Test" since at least 2000. And it's not as if concussion protocols are a new thing -- the first Google result for concussion protocol is the three-page, step-by-step document (PDF WARNING) used by an Ohio high school.

This isn't the first time the Oilers have allowed a concussed man to take the ice for them. In the midst of Steve Staios' first concussion in October of last season, I noted:

Additionally, the Oilers are still monitoring Steve Staios, who returned to the lineup Saturday after sitting out one game with a concussion.

Are the OIlers the only team in the NHL that rush people back from head injuries, or do I have some sort of selection bias?

Staios suffered a concussion in an October 6th game against Dallas, then sat out a game on October 8th against Calgary. He returned October 10th against Montreal, and I noticed that he looked "off" the entire game. Ireland's story was published on October 12th, and that night he was scratched against Nashville. Staios went on injured reserve for post-concussion syndrome and did not return until November 5th against the Rangers. Staios suffered a concussion, bad enough to miss a game, yet was returned to the lineup immediately after that, concussion and all. Even an Ohio high school realizes the severity of brain injuries and mandates six days until game action:

Once you are symptom-free, you may progress the following day to the next step. Day 1 is the day following the 1st symptom-free day!

If any post-concussion symptoms develop at any stage, drop back to the previous level and try to progress again after 24 hours. No medications may be taken at any step of the progression. This is to prevent masking a more serious underlying condition! You must check in with your athletic trainer every day PRIOR to practice!

Staios had three days off before coming back to game play. Somehow a multi-million dollar organization with access to the country's best medical facilities and doctor's hand-picked by the general manager can't follow a long-established concussion test nor a simple concussion protocol like a high school equipped with a school nurse can.

Remember when Steve Tambellini fired the medical staff and cited a culture change as the reason for doing so? Everything has changed in Edmonton - the players, the coach, the medical staff, the trainers, the assistant coaches, the minor league coaches, everything, except one thing.