The Edmonton Oilers have won just once in their last ten games and twice in their last thirteen.  Their only wins have come over the New York Islanders and Columbus Blue Jackets, two other teams near the bottom of the standings.  Players like Ales Hemsky, Shawn Horcoff, Jordan Eberle, Ryan Whitney, and others have missed many of the last several games due to injury, which has made the team harder to watch, and management hasn't brought in any help from outside the organization.  It's been a tough few weeks for these Oilers, but after the jump, I bring you good news.

Earlier this season I created a graph looking at the Oilers' scoring chance performance and comparing that to their Fenwick (goals + shots + missed shots) performance using a ten-game rolling average.  At the time, the Oilers were running hot in terms of chances, with their Chance percentage well ahead of their Fenwick percentage, and as you might have guessed, that gap has closed over the last several games: 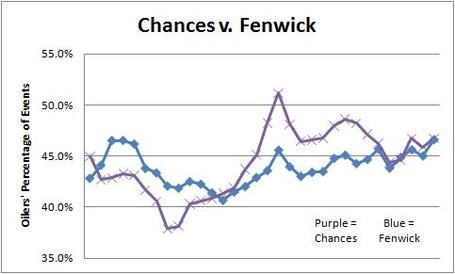 The first point on the graph above is game number ten and shows the Oilers' scoring chance and Fenwick percentages through the first ten games.  Each subsequent point on the graph is the the scoring chance and Fenwick percentage over the previous ten games (so the second point is games 2-11, the third point games 3-12 and so on).

So what's positive here?  Yes, the chances have regressed from their highest levels, and yes, controlling 45% or 46% of the shots and scoring chances is still awful, but considering all of the injuries this team has dealt with over the last fifteen games, I'm pleasantly surprised to see their Fenwick percentage moving in the right direction.  With many key veterans out of the lineup, young players like Theo Peckham, Taylor Hall, and Sam Gagner have been thrust into more responsibility (not just them, obviously, but those three stand out to me as having played in very important roles), and have actually held the fort quite well.  Sure, the losing is a bit depressing, but we fans came into this year knowing it was a development year, and you know what, there's evidence that some of the most important players long-term are getting better.  Heck, the team as a whole looks like it's getting better.  And for me, that's reason for optimism.