The Oilers drafted Jérémie Blain on the second day of the 2010 draft, and the first thing everyone in the organization said was just how much Bill Dandy liked him.  Life as a regional scout  must be tough.  You work all year driving from one town to the next making up reports on various players, and when the draft comes, there's a pretty good chance that the team won't pick any of your favorites.  If they do, it's likely to happen in the later rounds when the chance of a successful pick is pretty remote.  But there you are, putting your ass on the line for a guy you know is a better bet to fail than to succeed.  When Blain was taking his time to recover from a foot injury earlier this season (he missed just over two months before returning in December), I hope he called Bill Dandy if he ever felt like he needed to talk to someone who could feel his pain.

It's unusual for a player to be injured for the bulk of the season and end up rising in the rankings, but offensively, Blain has had a very good start to the year, scoring 11 points in his first 13 games with the Acadie-Bathurst Titan of the QMJHL.  Six of those points have come five-on-five (1-5-6), while the other five have come on the power play (0-5-5), where Blain plays a pretty important role, at least based on the number of events he's on the ice for (although that same criterion suggests that he doesn't play much at all on the PK).  Here are the +/- numbers by game state for Blain and for the Titan in the thirteen games Blain has played: 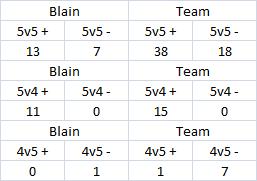 The five-on-five numbers are a nice improvement from a year ago (he was -22, although the team was very poor), but are nothing special on what seems to be a very strong club.  The one event on the PK would seem to indicate that he's either a very good penalty killer or he just doesn't see much time there.  Once you factor in that there were also a couple of 5-on-3 situations where the coach went with other options, it seems overwhelmingly likely to be the latter.

So he's not playing the PK.  Is he doing anything but providing offense?  This is what Stu MacGregor had to say post-draft:

Good size; about six-two and a half; very strong; competes hard; plays with an edge; a guy that we really liked.  Billy Dandy, our Quebec scout, he really pushed him hard, and when I saw him play, the kid played on a terrible team, but played hard every shift.  So we feel we've got some more size there and a guy with some grit.

Steve Tambellini echoed those comments when he described Blain as "a hard guy to play against", and Blain is also wearing an "A" this year, so we might tentatively add leadership to his basket of skills.  A team leader with good offense, decent size and a mean streak is a nice set of skills to build on, and honestly, I thought about ranking him higher, except that, unfortunately, there's not much evidence of his edginess in the gamesheets, and it wasn't something I noticed from Blain in training camp either.  One of the things the QMJHL tracks is hits, and in the thirteen games Blain has played, the Titan have registered 206 of them.  Blain has claimed a total of five, zero of which have come in the eleven games since he returned from an injured foot.  Now, he did take a "checking from behind" penalty in one of those games (apparently not a hit) and a couple of roughing minors besides, and we all know that hit counts aren't an exact science.  Still, I expected to see more evidence of surliness from a guy who had "edginess" and "grit" marked down as positives.  Then again, it's only thirteen games, so it's way too early to say that the scouting reports are plain wrong.  Count it as something to keep an eye on.

In the end, Blain remains a decent prospect, though there's some concern that he may be a bit more one-dimensional than the post-draft scouting reports implied.  He's not on the PK, he's only about average for his team at EV om terms of goal differential, he may or may not have a strong physical presence, and while the offense is good, it's not good enough to carry Blain to an NHL career.  Even still, size and skill is a rare combination, and there's still plenty of time for Blain to grow into a capable pro.