The rough times continue for Edmonton fans.  Early in the broadcast, the Oilers' record was show as an extra large graphic  - thirteen wins in forty games.  I thought about it for a minute and without looking, I can remember eleven of those thirteen wins.  It's a rough season when the fans can remember nearly all of a team's wins.  This one was a little different though - the Oilers outshot and outplayed a team that nearly everyone outshoots and outplays, but they still lost. 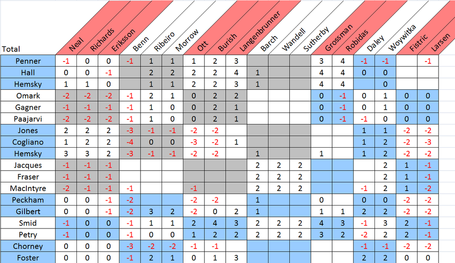 Tom Gilbert is something special.  I've written about Oiler fans and their unfortunate selective perception when it comes to Gilbert, but he's played some high-level hockey this season.  He's had his struggles while paired with Jason Strudwick, but other than that, he's been outstanding.  Tonight was no exception.  Gilbert was the only top four defenseman dressed tonight and he was forced to carry Ladislav Smid, Theo Peckham, Kurtis Foster, Jeff Petry and Taylor Chorney.  Carry them he did.  Gilbert logged 31:05 of ice time, including nearly twenty-four minutes of even strength time.  He did so paired with Theo Peckham who, at Gilbert's side, is beginning to look like fourth defenseman, though he still has the occasional brain bubble and costs the team.  Brad Richards played fifteen-and-a-half minutes of 5v5 time tonight and Gilbert was on the ice for more than eleven of those minutes.  As you can see by the chances matrix above, Gilbert played Richards to a draw.

Thirteen minutes of ice time with Ryan Jones and Andrew Cogliano, and Liam Reddox looked like the brightest bulb in the bunch.  He played a smart game and demonstrated just how much he belongs on the big roster over guys like Jacques and MacIntyre.

I really enjoy watching Jeff Petry skate.  He moves fluidly and looks like a real NHL player.  He's got a ton of work to  do,  but on a "saw him good" basis, he looks like the kid we've all heard about since draft day.

Why is Steve MacIntyre dressing?  Tom Renney penciled him into the lineup this evening and gave him less than two minutes of ice time.  If the Oilers are deep enough that they can afford to ice someone for only two minutes, why not bring in someone who can help in a specific area -- a faceoff artist, a penalty killer with no other game perhaps.

James Neal scored on a bullet of a wrist shot in the third period and from the looks of it Theo Peckham was caught taking his evening walk.  Peckham is the rough and tough half of the duo, but it doesn't mean he can play poorly when it comes to positioning.  He needs to eliminate that one large mental faux pas per game.

There were eleven minutes to go in a tie ballgame, and the Oilers had just tied the game a minute beforehand.  In every other game over the course of the season, Renney shortens his already short bench and doesn't even look at the fourth line in the third period.  Tonight he decided to reward a fluke goal by the fourth line by putting them back on the ice in the third period of a tie game against James Neal - Brad Richards - Loui Eriksson.  Eleven seconds after Fraser lost the faceoff to Richards, the Stars had the lead.  There are few things a coach can do worse than reward a team effort with terrible coaching decisions, and J.F. Jacques - Colin Fraser - Steve MacIntyre against Brad Richards is one of those decisions that leaves a fan scratching his/her head or crying in his/her cereal.

The lyrics are the theme song of noted hack Brenden Morrow.  It takes a helluva man to throw a punch at Kurtis Foster as he's being held back.  Morrow and Steve Avery should get together for a brawl, though they'll need to make sure they have plenty of people nearby to hide behind as they call each other on.  Derian Hatcher is gone, but his stench still surrounds Morrow.