Share All sharing options for: 2008 Draft - Forwards and NHLE

The 2008 draft is an interesting animal because unlike 2009 and 2010, the top picks haven't surged to the top of the list.  Instead, quite a few players chosen a little bit later on - like Jordan Eberle - have come to the forefront.  For most Oiler fans, Stu MacGregor is regarded as something of a savant, and he certainly deserves a tonne of credit for snagging Eberle, but as we'll see, the other two forward prospects taken in this group haven't exactly separated themselves from the pack.

In the chart below, I've taken each player's goals, assists and points, converted them to a "per game" rate (both regular season and playoffs), multiplied them by the league equivalency number, and then expressed them as an "NHL equivalency" assuming an 82-game season.  As you may have guessed, each league has a different equivalency number.  I've used this article for the translations from the NHL, KHL (multiply offense by 0.83), SEL (0.78), FNL (0.54), DEL (0.52), AHL (0.44), NLA (0.43), NCAA (0.41), WHL (0.30), OHL (0.30) and QMJHL (0.28).  I've used this article for the translations from the USHL (0.27).  Most of these players are now playing in leagues now covered by Gabriel Desjardins' NHL equivalencies.  Those that aren't are mostly in the ECHL, which is itself a pretty bad sign.

Before I go ahead and put up the chart a bit more explanation is needed.  Not all of the players drafted in 2008 were the same age.  In fact, several players had already passed through the draft at least once (and sometimes twice) before getting selected in 2008.  All of these older players are included in the chart but are marked in yellow.  Those who were drafted as overagers in 2009 or 2010 but were eligible in 2008 are also included with "N/A" written in the "Draft Number" column.  If 2008 was their first year of eligibility, the yellow highlighting disappears.  The "Draft Number" column itself is also not the player's actual draft position but the player's draft position among forwards.  So, for example, Jordan Eberle was drafted by the Edmonton Oilers 22nd overall but was the 11th forward to be drafted, so his "Draft Number" in the chart is "11".  The "team" column is for the team that drafted the player, rather than the player who holds his rights; more often than not it's the same club, but I felt like I should point that out.  The chart is broken into four sections, and each one can be enlarged by clicking on it. 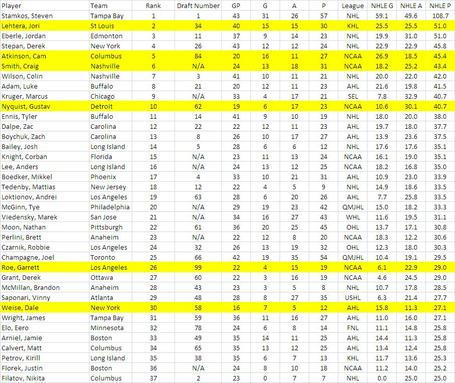 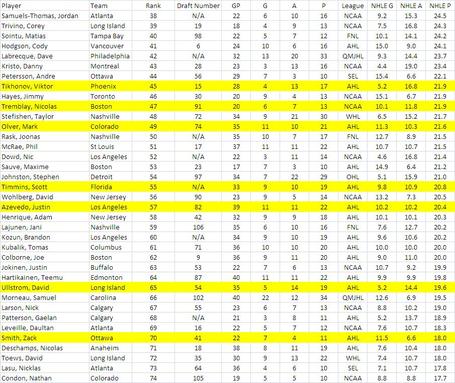 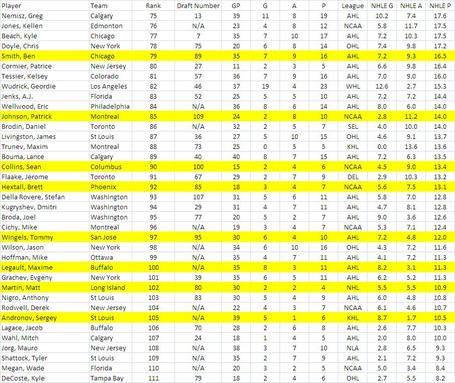 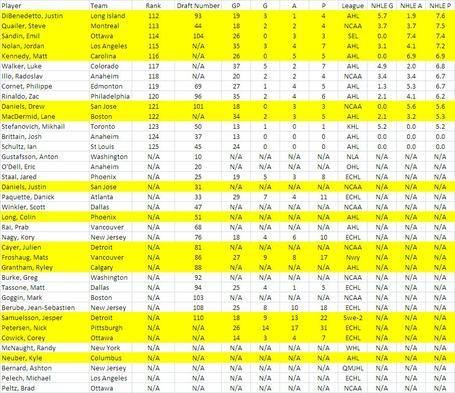 Teemu Hartikainen and Philippe Cornet are two players who have suffered since moving to a North American pro league, but they're far from alone.  The last time I looked at this draft class, there were 32 players with an NHLE of 30.0 or higher, and 59 players with an NHLE of 25.0 or higher.  Those numbers are now down to 24 and 37 respectively, with several of the players in that group still playing somewhere in the CHL or NCAA; in the end, only 22 players are playing pro hockey and have an NHLE of 25.0 or greater.

The amazing thing from this draft is that of those 22 players, only six of them are top ten picks, which includes a couple of players who would likely be regarded as disappointments in Nikita Filatov and Mikkel Boedker.  Both of those players have been playing as pros for a while, so you'd expect to see them performing more like Jordan Eberle or the Rangers' Derek Stepan.  Instead, they're putting up solid AHL numbers, but haven't yet been able to establish themselves as scorers in the NHL.

The other top ten guys who are really struggling are at least playing for the first time against men.  Cody Hodgson is a bit off the pace for a top ten pick, and is once again injured.  I've long considered him a can't-miss guy, but at this point, the performance is trailing off, and the injuries are adding up.  A bit further down, we find Joe Colborne who was drafted out of the AJHL and is coming off a huge season in the NCAA.  I don't know what his splits are like this year, but he's certainly got the size to play the pro game, and I expect him to improve as the year goes on.  Further down still is the Blackhawks' Kyle Beach, who had questions about his offense (and attitude) when he was drafted.  On the bright side, he may be able to play a role in the NHL even if he doesn't make it as a scorer.  And finally, Anton Gustafsson, who's at the very bottom of this list, and has had his career completely derailed by injuries.

A couple of teams look to have done very well in this draft with at least two prospects tracking well in pro leagues.  The Buffalo Sabres, for example, have both Tyler Ennis and Luke Adam near the top of the charts.  Ennis is among the rookie scoring leaders so far this season, while Adam is well clear of a point per game in the AHL, though he's still trying to find his scoring touch in the NHL.  Carolina's duo of Zac Dalpe and Zach Boychuk have also shown well so far this season.  Both players are clear of a point per game in the AHL, but Boychuk's case is particularly interesting.  Boychuk's rookie year in the AHL was a bit of a struggle offensively, and it looked like he was lagging behind his draft class in terms of NHLE, but that year of development against men is paying off this season, and now he's back among the draft's scoring leaders.  Now, I suppose each player will develop differently, but after seeing so many players struggle with their first year of pro hockey in this exercise, it seems to me that, most times, teams are better off getting that struggle out of the way as soon as the player is (somewhat) ready rather than sending him back for another year of junior hockey.  For the Oilers, that might mean finding a place in the AHL for guys like Tyler Pitlick, Ryan Martindale, and Curtis Hamilton as soon as next season.