Tales from the Road: Vancouver

Share All sharing options for: Tales from the Road: Vancouver

Sometimes life is funny. Living in Calgary, being a university student and starting out my career, I had few opportunities to return home to Edmonton to catch games, so most of my live hockey was at the Saddledome. This would change for me in the fall of 2007. Why? I was finally a graduate, which tends to free up both your schedule and your bank accounts.

I was invited to thanksgiving at my Aunt and Uncle’s place on Vancouver Island, which was when some friends were running the Victoria marathon, and another friend in Vancouver had asked me over for a visit; it was like fate had lined everything up in one week. I ended up working the Victoria marathon, going for dinner on the island, and going to Vancouver, but not before checking the Oilers' schedule, and wouldn't you know, there was a game for the Oilers in Vancouver during my visit! How perfect! My Vancouver friend is not the biggest hockey fan, but she was eager to join me for the game. Luck was on my side again when I went looking for tickets. I was able to get two row 1 tickets for less than I would pay through Ticketmaster in Calgary or Edmonton for the same seats. So I made my Hockey Night in Canada debut, and I told everyone that would listen to look out for me.

The game itself ended up being horrible, and I should have known as the players hit the ice, not wearing the colours I was expecting. How often do you see your team playing on the road in their home jerseys? Not too often, and maybe for good reason. The Oilers didn’t score until nearly the end of the third period, Sheldon Souray hurt his shoulder in a fight with Matt Cooke, and it was really hard to be an Oilers' fan and smile through it all. Remember, this was coming off of the ’06 cup run.

But I do have some fond memories of this game. At this point I was like many fans, and believed that Rob Schremp, if given the opportunity, could be just what this team needed. How lucky I felt that for this game, Schremp was dressed and in the lineup, and right there in front of me! In fact, pretty much the whole team was right in front of me at one point or another. Another guy I remember being excited to see was Joni Pitkanen. Amazing how my perspective changed over the next few the months. (Sorry Derek!) 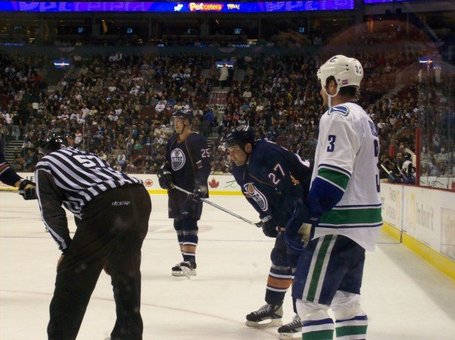 For one face-off, Ales Hemsky was literally right in front of me. I remember shouting "Come on Ales, big shift, get us on the board." I also remember just how shocked I was when he looked up, saw me and smiled. He did get a shot on goal before the play was whistled down. I told everyone that shot was for me, that I nearly got us a goal. I also ended up in a couple of NHL photos. I was a little sad that you can't see my face, but it is clearly my jersey and torso behind Raffi Torres in a picture hanging in my office.

Walking around GM Place gave me my first taste of just how bad fans have it in Alberta. I had always heard that our arenas are not that great, and now I was seeing it. It did feel dark walking around parts of the concourse, but my friend Rickards Red made me feel a little brighter. I was shocked at the food and drink selections you would never see back home, but happily enjoyed some of them. For the most part people were able to move about the arena, not like the bottle-necking you experience at Rexall, or in the Saddledome. Overall I have to say that it is no longer my favourite arena, but I would take it as an upgrade over what most Oilers' fans have now.

The other thing that I found interesting at this game was the people. I would say that one third of the jerseys in the arena were Oilers' fans. I received some playful jokes, and some teasing - even by the Canucks' mascot - but nothing like the comments I hear as a visible Oilers' fan in the Saddledome. I felt very at home, and was sad to leave my seat by the end of the game.

The best part for me was about three beers in, when I made an important decision - I would keep traveling to games. I wasn’t sure at the time, and I still wonder what my eventual goal is (do I want to hit every arena, or see the Oilers play in every arena, or something else entirely), but I’ll keep working at it for as long as I need to.  The funny part is that I have to go back to Vancouver at some point because I didn’t get my picture taken with the Canucks logo behind me. I know that there are plenty of other fans with experiences like this, or with similar goals and ambitions. The point is that this is a fun way to travel during the winter. It's an opportunity to see new places, new people, and of course, watch hockey (unlike my Mexican vacations where you can’t find a hockey or football game to save your life). 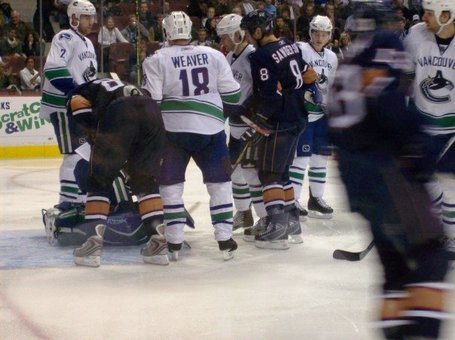 So maybe watch the crowds a little more closely during Oilers' away games, you never know who you might see.