Can you believe it, we're into Seplander already, and it was exactly one year ago today that some of us were at the Oilers and friends softball game. This year we are weeks, okay let's say days, from pre-season Oilers' hockey. Can you feel it?! Well let's have a look at what happened with the Oilers this week.

Let's start with the best news shall we? The NHL had their rookie showcase in Toronto and our very own Jordan Eberle, Magnus Paajarvi, and Taylor Hall were there. There were plenty of photos floating around twitter, and grown men feeling no shame in expressing their giddiness watching some of the interview and shootout videos that appear on the Oilers' website. In these photos we see that Eberle is indeed wearing #14 (huge relief for me, I just ordered his jersey), Paajarvi is wearing #91 and Hall hasn't yet selected a number. Not a problem, he still has time. Or maybe the better explanation is that the Oilers really loved playing out the Taylor/Tyler drama, and are doing it again. If not, you're likely thinking that we're waiting for Souray to be traded so that Hall can wear 44.

More after the jump...

In other news, Sheldon Souray, still an Oiler.

Many people, including me, missed Sportsnet's announcement earlier in the week that Tambellini would not be signing Mike Comrie this year. Wouldn't you know it, but later that same week, Comrie signs with the Pittsburgh Penguins. I think that that was a great signing for all parties. Comrie didn’t have a career year last year, what with the whole Mono thing, and given the fact that he was a member of the 30th place Edmonton Oilers, a team that most people thought he would never play for again. And on that note, I think that Comrie must have felt a lot of pressure last year. No, his contract wasn’t for much money, but he was coming home. Most fans remember how he left and that had to weigh on him. Then the team got sick, really sick. Then the team just couldn’t win anymore. This year? Comrie will be playing for the bare-bones minimum salary of $500,000 for one of the most exciting teams in the league (and I can say that even though they are one of my least favourite teams! Not you Malkin, I think you’re amazing), and with a good chance of making it into the playoffs. Going even further than that, it has been reported that Sidney Crosby called Comrie to tell him how excited he was to hear that Comrie would be playing on his wing. Time will tell how this works out and if this will be Comrie’s final destination, his last one year contract, or a springboard to a new address again next fall.

On a less happy note, who can forget that Nikolai Khabibulin was sentenced on Tuesday? Khabibulin will be appealing his sentence, which consists of the minimum fine, minimum time, and treatment. My understanding is that, because of the appeal, he will be able to attend training camp. There are still many unanswered questions out there, and no one seems to be sure of when Khabibulin will be serving time, but one thing I know for sure is that I have never typed Khabibulin as much as I have this week. In fact, I no longer hesitate and double check to make sure I spelled it right, now I just know.

In RFA news, Sam Gagner signed a 2 year, $4.55M deal much to the delight and relief of many Oil fans. Now I am not the biggest Gagner supporter, but it is good to hear that he wants to grow and develop with this team. The Oilers seem to get so much bad press that good news right about now feels absolutely fantastic. We still await Cogliano's signing. Seeing as Cogliano has been one of my favourites the past few seasons (yes, I have a lot of favourites) I decided to post the photo above; I hope he knocks it out of the park this year.

The Oilers television schedule was also released this week, which has its good and bad points. No more PPV games! Rogers Sportsnet One is covering most of the games... and is not yet available on Shaw cable, Shaw Direct or Bell Expressvu. Shaw and Rogers are currently in negotiations, but fans are getting more and more concerned as more time passes without a television deal.

The NHLPA and the NHL have reached an agreement. What does this mean? Ilya Kovalchuk is now a New Jersey Devil, and no longer on the free agent market. Also, this might be the last really long term contract we will see for a while, or at least until the new CBA is signed. Personally, I think that the contracts were getting really ridiculous. I really like to see the shorter term deals. As a fan, it’s a little less worrisome that you will be overpaying for someone after one good year; then again, the long-term deals do provide that comforting feeling you get knowing that your franchise player is locked up for years to come.

Here are some blogs that you might want to check out, if you missed them:

Khabibulin should go to jail, but not the unemployment line - Cult of Hockey

Oil Kings Cut Down to 35 - The Pipeline Show

And We All Pulled the Trigger - Black Dog Hates Skunks

What if the Oilers Aren't Terrible? - Copper & Blue

Magnus Paajarvi On Timra, His Contract, The Oilers And Mom - Copper & Blue

Souray and Khabibulin, Why Vets Aren't Always The Answer - BBO

Video: Rangers goalie Henrik Lundqvist on NYC bus love, goals for next year and his hair vs. Whoopi and Trump - Puck Daddy

What We Learned: The best team in Western Conference, NHL? - Puck Daddy

A Look At The 2010 Hockey Book Season - Greatest Hockey Legends

And then, the nearly complete series we have been running here on The Copper and Blue is well worth a look. We have been discussing our favourite post-dynasty Oilers. So far there has been:

Also, a reminder out there for anyone who would be interested in a free online NHL 10 tournament, have a look at my earlier post and sign up if this is something you would like to participate in.

As Derek pointed out, it is Seplander. You can go here for your very own copy. 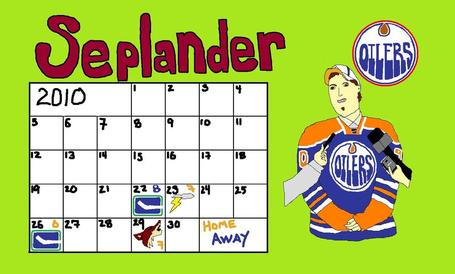 In and around Edmonton, there's lots going on.  Today, September 4th, is Sonic Boom at Northlands park. I will be one of the thousands of people standing around in the potential (very likely) rain rocking out to some great music. Of course, this will be an excellent time for the city to turn off the LRT right? I mean you have 10+ thousand people, let's just make things a little more difficult to get them to and from the show? Sigh. Still keeping with music, if you had tickets for the Serj Tankian show on September 13th, the show has been postponed so hold onto your tickets.

The Beaumont Blues festival runs this September long weekend. This week, you can catch the Gaslight Anthem at the Starlight Room, Almost Abba at the Century Casino or Ill Scarlett at the Taphouse in St. Albert.

Saturday and Sunday night, the Oil Kings are playing in a rookie tournament in St. Albert at Cervus Credit Union Place. Games start at 7pm, and it's family hockey, so you may want to check it out.

This week was a coworker’s birthday, and as the nice girl of the office I of course made a cake. I tried out this lemon cake recipe and boy did it go over well. I skipped the glaze in favour of a butter cream icing. This may have been a poor choice as it ended up being a really sweet treat, but everyone seemed to love it. So, here you go, you can try it out too if you want. 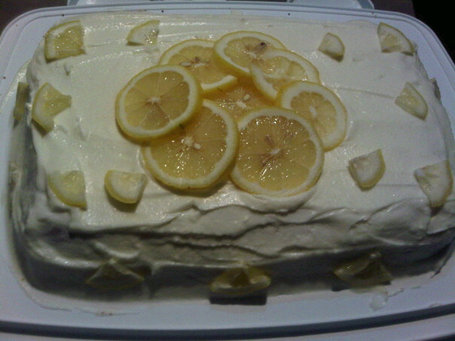 Otherwise, it's the September long weekend. Please make sure to play safe, and learn from Khabby's mistake - don’t drink and drive!