What Does the Money Tell Us - Forward Edition

Share All sharing options for: What Does the Money Tell Us - Forward Edition

Over the last couple of days I've looked at the defenders and goalies on the Edmonton Oilers by comparing them to the players who make about the same amount of money around the league. Yesterday, we even changed history! Today, I'll look at the players slated to play in the Oilers' top nine forwards. Almost every "mock" lineup I've seen has the same nine guys filling those roles: Shawn Horcoff, Dustin Penner, Ales Hemsky, Sam Gagner, Gilbert Brule, Andrew Cogliano, Taylor Hall, Magnus Paajarvi, and Jordan Eberle. In the last two articles I've always excluded the ELC's from the analysis, and that practice will continue here, which means the three rookies are out of contention. But that still leaves some interesting questions. It's often said that Shawn Horcoff's contract is an albatross. So how does he compare to the rest of the league, and is the cap number as bad if we consider 2010-11 in isolation? On the other hand, Ales Hemsky's contract is widely considered a great deal, but how does it compare to others in the league making about the same amount? Dustin Penner's deal was considered an overpay when it was signed; is that still the case today? And what about the three new contracts signed by Brule, Gagner, and Cogliano? We'll look for answers after the jump.

Shawn Horcoff is up first this time. In the chart below, I've listed the ten other forwards in the league with the most similar cap numbers. I decided to use all forwards instead of separating wingers from centers because positions can be quite fluid, even once the player is in the NHL. It may not be the case with Horcoff but a guy like Gilbert Brule will probably play both wing and center this season, and there are quite a few players in the league that are the same. This method ignores whether the contract was signed as a restricted free agent or unrestricted free agent, which is a drawback, but in many cases, the deals were signed when the players were RFA's but include UFA years (like the Oilers' Ales Hemsky). In the end, I decided to simply include all players with the exception of entry-level contracts (which, as I mentioned above, means you won't find charts for Taylor Hall, Jordan Eberle, Magnus Paajarvi, or Linus Omark as we move along). Anyroad, here are Horcoff's closest comparables: 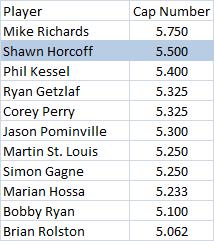 The most surprising thing on this list to me is that Shawn Horcoff is the only forward in the league with a cap number of $5.5M! The other thing that stands out is all of the contracts on this list that were signed when players were RFA's - guys like Richards, Kessel, Pominville, Getzlaf, Perry, and Ryan. It's a great demonstration of how the market has changed in this CBA, and more money is getting to younger players sooner. Another thing these players have in common is that they're the best offensive players on the team with only a couple of exceptions. Unfortunately, one of those players is Shawn Horcoff. In fact, Horcoff's point-per-game rate is the lowest of any of the players on that list at 0.59. The only other players below 0.7 points per game are Phil Kessel (0.62), who's likely going to push that number higher, and Brian Rolston (0.63), who's on a truly terrible contract. It's of course possible that Horcoff outscores tough competition in 2010-11, which would help to mitigate the drop-off in offence if guys like Hossa, Gagner, Getzlaf, and Richards weren't also playing (and beating) tough competition. Even if we're looking at just the 2010-11 season, it's hard to see Horcoff's contract as being good value.

This is the combined chart for Ales Hemsky and Dustin Penner. Penner's individual chart goes from the top to Pierre-Marc Bouchard, and Hemsky's goes from Mike Fisher down to the bottom. There's a real variety of players here. We've got poor UFA signings (Jason Blake, Michael Ryder), questionable RFA signings (Joffrey Lupul, Milan Lucic), astute RFA signings (Joe Pavelski, David Booth), and good UFA signings too (Nik Antropov, Brendan Morrow). So where do Hemsky and Penner fit on that continuum? Well, none of the players on this list qualify as "superstars", so I'd say they look pretty darn good. In fact, with Marc Savard still dealing with post-concussion symptoms, Hemsky might even be the very best player on the list. I wouldn't be quite so bold in my praise of Dustin Penner (although I'm sure Derek would!), but I will say that he doesn't look out of place alongside the better players on this list. 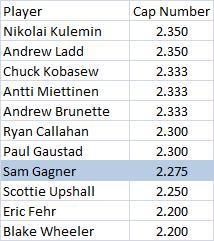 Sam Gagner is difficult to judge in this scenario because "potential" goes out the window. This exercise is all about how he's going to play this year, and looking at things in that way, Gagner doesn't look quite so golden. He's certainly not the worst player listed above, but I wouldn't say he's the best either. A player like Scottie Upshall, for instance, probably doesn't have the room to grow that Gagner does, but he was an outscorer last season against much stiffer competition. Antti Miettinen is another guy that I'd never take in a trade for Gagner, but who could reasonably be expected to post better results in 2010-11. In the end, I think Gagner's deal is decent value if he doesn't make much progress, and could be great value if he takes a big step forward. I, for one, am excited to find out! 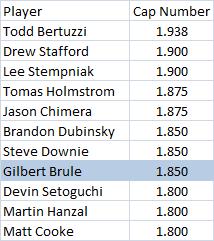 I haven't been too impressed with Gilbert Brule's "break-out" season, and this list has given us a very interesting comparable: Steve Downie. Both players posted one (and only one) year of positive results driven mostly by teammates (Penner and Stamkos/St. Louis) and strong percentages (Brule's EV on-ice shooting percentage was third on the Oilers at 9.62%, while Downie's was second on the Lightning at 11.18%; Downie's personal shooting percentage was also 19.0% in all situations, tied for fourth in the NHL). Niether player is big, but both play a physical style. The personalities are quite different (I'm sure you know which one is the jerk), but they earned their results in similar ways. Personally, I think both guys will regress significantly, and won't contribute as much as many of the other players listed above like Brandon Dubinsky, Devin Setoguchi, and Martin Hanzal (although the Hanzal comparison really isn't fair; he'd be the best player on Gagner's list too). That said, maybe Brule (or Downie) steps up his play, or continues running with the percentages, and makes me look the fool. 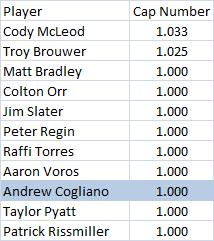 I like Andrew Cogliano, and like him much better than guys like Patrick Rissmiller (who played in the AHL last year), Colton Orr (knuckle-dragger), Cody McLeod, and Aaron Voros (player-punchers). The teams creating value at this pay level are those employing real contributors like Troy Brouwer, Peter Regin and Raffi Torres, players who can be really solid contributors in your team's top nine forwards and should give the Blackhawks, Senators, and Canucks an advantage over the teams paying a guy to punch people. Andrew Cogliano is obviously much closer to the first group than the second, and has a very good chance to contribute more than his stipend next season.

Just as with the defensemen, the Oilers don't have many contracts dragging them down, although this group probably has more that could go wrong. Hemsky could get injured, Brule could regress, and Horcoff could not have a miracle offensive season. On top of that, the Oilers are filled with youth and inexperience. Although there's only one contract that's a really poor one (sorry Horc), there's a long way to go before the team will be ready to seriously compete.