What Does the Money Tell Us - Goaltender Edition

Share All sharing options for: What Does the Money Tell Us - Goaltender Edition

Being deemed a liability isn't any fun at all. Most of the players in the NHL have been stars, even superstars, at some point in their hockey-playing days, the most (or one of the most) important asset(s) on their respective teams. It must sting, then, when not only fans, but managers across the league decide you're a liability. The Oilers have had several: Patrick O'Sullivan was traded to be bought out by his new team, and then couldn't find a one-way contract; Sheldon Souray has cleared waivers, and can't find a trade; Robert Nilsson cleared waivers, was bought out, and then couldn't find an acceptable contract in the NHL. Being a liability is tough, which brings us to the Oilers' goalies. Yesterday's poll on defenders suggests to me that the community thinks the contracts of Tom Gilbert, Ryan Whitney, Ladislav Smid, and Kurtis Foster may well be good value going forward. I won't have the confidence to say the same about the winner of today's poll who may still be considered a liability. After the jump, we'll look at the comparables to the Oilers in goal.

The first two player we'll look at is Nikolai Khabibulin. In the chart below, I've listed the ten other goalies in the league with the most similar cap numbers. This method ignores whether the contract was signed as a restricted free agent or unrestricted free agent, which is a drawback, but in many cases, the deals were signed when the players were RFA's but include UFA years (like Rick DiPietro). In the end, I decided to simply include all players with the exception of entry-level contracts. Here are his closest comparables: 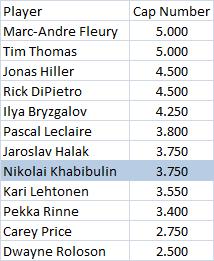 Now, there are way fewer goalies than there are defensemen in the league, so the range here is quite a bit larger. Nonetheless, it's clear that all of these players were signed to be starting goaltenders in the NHL. Goalies like Jonas Hiller, Ilya Bryzgalov, and Jaroslav Halak have a pretty consistent track record of both above average play and good health, which is exactly what you'd expect from all of the goalies on this list. Except that most of the rest can't say that. Marc-Andre Fleury is a significant liability for the Penguins at that price because of his (lack of) performance, but the biggest concern in the group is injury: Nikolai Khabibulin, Kari Lehtonen, Pascal Leclaire, and of course, Rick DiPietro are all significant injury concerns. Leclaire compounds this problem by being pretty awful when he does play. Now, I think Khabibulin's contract is terrible, but in terms of the 2010-11 season alone, he'll probably provide more value (on the ice) than a couple of guys on this list. But the takeaway for me looking at this list of players is that when signing a starting goalie, teams should make sure the guy they pick has (1) a reasonably long track record (2) of recent success, (3) isn't too old, and (4) doesn't have a history of being injured. If that kind of goalie isn't available, go cheap. The Oilers didn't and now they're stuck the Maginot Line.

Aside: Thanks to Quain for that awesome Maginot Line reference. Now, here's the thing. That comment (via Ben) is right near the bottom of the page, and isn't rec'd! This, dear readers, is a tragedy! I know the post is almost a year old now, but I rec'd it today and suggest you do the same. Together, we can change history! 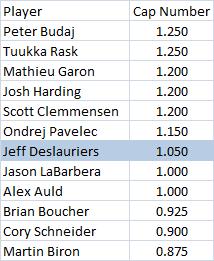 All of these guys were signed as back-ups, but some of them have a decent chance at usurping the starting role. Tuukka Rask has already done it in Boston, and there's real hope for guys like Harding, Garon, Pavelec, and Boucher to do the same without another goalie in the organization being injured. Really, any one of these guys could have a fine season. For the most part, you don't have the upside of some of the guys on Khabibulin's list, but you also don't have the same kind of risk. As for Deslauriers, I think he's the worst one-year gamble on the list. Last year, these goalies (excluding Schneider) averaged an EV Sv% of .916, and in 2008-09 the same group (excluding Schneider and Rask) was at .917, which is slightly below average goaltending. I don't like Deslauriers' chances of covering that. 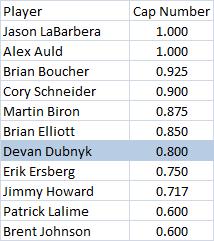 More back-ups plus Jimmy Howard. I'd say he stole the job from Chris Osgood, but the fact is Osgood was so bad that he would have lost that job to Bryan Pitton last year. Howard did play well to keep it though, so good for him. Anyroad, based on performance alone, it's hard to think Dubnyk will be anywhere near the top of this list, but league average goaltending in twenty games would be excellent value at that number. Last year, this group (excluding Schneider) averaged an EV Sv% of .913 (excluding Schneider), and in 2008-09 (excluding Dubnyk, Schneider, and Howard) it was .916. I don't particularly like Dubnyk's chances of making it to slightly below average this year, but I do think he's a better bet to do so than Deslauriers, and a better bet to stay healthy than Khabibulin. Of course, he might also start the year in Oklahoma.