What Does the Money Tell Us - Defense Edition

Share All sharing options for: What Does the Money Tell Us - Defense Edition

One of the most important things to have in order to win in any pro league is salary efficiency. This becomes even more important in a capped league like the NHL where most teams are operating under similar budgets. Most fans understand this intuitively; it's why a decline in play draws so much criticism: not only is the player making more mistakes on the ice, he's also become a liability financially, and a source of worry for both the team and its fans. One of the most biting insults from a fan, right along with being "bad" or "ineffective", is being deemed "overpaid". It was the main reason the writers here left a useful player like Shawn Horcoff unprotected in the mock expansion draft. But how can we decide whether or not a player is overpaid? One way to look at it is by comparing players with others who have been awarded similar amounts of money in the market. After the jump, we'll look at the comparables to the Oilers on defense.

The first two players we'll look at are Ryan Whitney and Tom Gilbert, who both have a cap number of $4M. In the chart below, I've listed the ten other defenders in the league with the most similar cap numbers. This method ignores whether the contract was signed as a restricted free agent or unrestricted free agent, which is a drawback, but in many cases (like Gilbert and Whitney), the deals were signed when the players were RFA's but include UFA years. In the end, I decided to simply include all players with the exception of entry-level contracts. Here are their closest comparables: 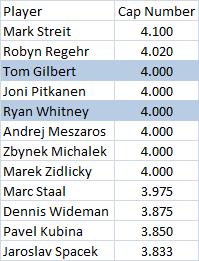 There aren't many "complete" players on this list. Although every single player here is considered one of his team's top three defenders, he's often not the best defender on the club. Instead, these players are asked to provide elite skills in a specific role. Players like Robyn Regehr, Zbynek Michalek, and Marc Staal are shut-down defenders, whereas guys like Andrej Meszaros and Mark Streit bring more offense than defense to the table. Gilbert and Whitney probably both fit into this latter category. If either of them is able to continue providing offense (on the power play) and also develops into an able shut-down defenseman, he'll end up decidedly underpaid. As it is, both contracts seem to provide reasonable value. 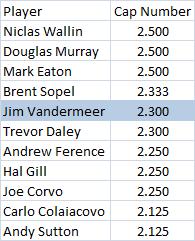 Jim Vandermeer is one of the players on the team who's often deemed overpaid for his role, and we can see why by looking at this list. Last season, Vandermeer was at times a healthy scratch with the Phoenix Coyotes, and when he did play, he was consistently a bottom pairing defender. Many of the other players on this list would be considered solid (Murray, Daley, Corvo), or marginal (Sutton, Eaton, Gill, Ference) top four defenders. Looking at this list, I think it's clear that Jim Vandermeer is overpaid, and that makes sense. The Oilers did, after all, acquire the player by letting someone else (Phoenix) buy out Patrick O'Sullivan. 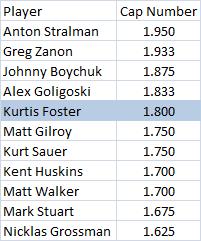 Kurtis Foster's comparables are interesting because there aren't too many players on this list who were signed as UFA's. Many of the players are on their second or third RFA deal (Stralman, Gilroy, Grossman, Stuart), and are probably better players, which is to be expected. Looking at the UFA's, Kurt Sauer stands out as a player who was a great deal when he signed, but who's now a question mark considering he missed most of last season with injury. Of the others, Foster looks very good, and will be in a similar situation to that of Greg Zanon one year ago: asked to play in the top four despite having little experience doing so before. If he can pull it off, he should be able to provide good value to the Oilers over the next two seasons. 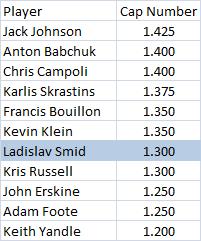 This is a pretty mixed bag, with some pretty good young players (Campoli, Babchuk, Johnson, and Yandle), as well as a couple guys playing out the string (Foote and Skrastins). Almost all of the young players on this list are offensive defensemen still working on the defensive side of the game, whereas Smid is a defensive defenseman... still working on the defensive side of the game. If he's in the bottom pairing, Smid isn't providing any surplus value because defending well against the dregs isn't exactly a sought-after skill. If Smid wants to move up the pay scale, he'll need to show that he's a better player than guys like John Erskine and Francis Bouillon who have made careers of playing effective bottom-pairing defense. 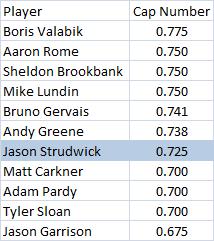 I was really expecting Jason Strudwick to look terrible against his comparables, but he really doesn't. There are a couple of young players on this list who rise above the pack (Gervais and Greene), but most of the rest have spent significant time in the minors over the last two seasons. Those who haven't (Strudwick, Brookbank, and Pardy), are seventh defensemen who spend many nights as a healthy scratch. The Oilers may have been able to find a player slightly cheaper than Strudwick to fill his role, but looking at this list, it seems difficult to say that he's really overpaid.

Having looked at the Oilers' defense, most of the players look like they're providing pretty good value, which is strange because the defense has rightly been considered a significant weakness on this club. The reason the defense is so weak, though, isn't the guys who are playing, it's the one who isn't. The Oilers are missing about, oh I'd say $5.4M in defense spending. The real problem is that even if Sheldon Souray is moved, it's difficult to imagine a really good player coming back in return. Nonetheless, if Steve Tambellini can limit the damage coming back for Souray (say, a lot of money on a one-year deal), the current group of defenders could provide excellent value by as early as next season.