What a week! Lots of changes here in Oil Country, including a training camp roster which is extremely different from last year. This week also saw some player updates, a message from the GM and the rookie tournament in Penticton which of course included in some of our minds was a HUGE win over Calgary.

The biggest and perhaps most talked about story of the week was the press release from Oilers GM Steve Tambellini. There have been those who have written that they feel that this was the wrong move and several that think that it was the right thing to do. I am siding with our very own Jonathan Willis on this one, I think that it was right for Souray to be barred from training camp. I do realize that everyone is entitled to an opinion of their very own, so I will leave this subject at that and provide a couple of posts with the different takes in my suggested blog reading list.

Jason Gregor tweeted "#Oilers forward JF Jacques will not be ready at the start of camp, and is doubtful to be ready to start the regular season" on Thursday." Many Oilers' fans out there, including me, were not surprised to hear this and there are still many questions on whether or not Jacques will ever have a healthy full season. Luck, some people have it and some people clearly don't is how I'm starting to look at this.

Friday was the kickoff to training camp with the medical testing. The Oilers' Jen Sharpe reported a bit on what was happening, as did Gregor who gave a quick breakdown of who was at camp and expected lines for today's drills and scrimages at Rexall place. 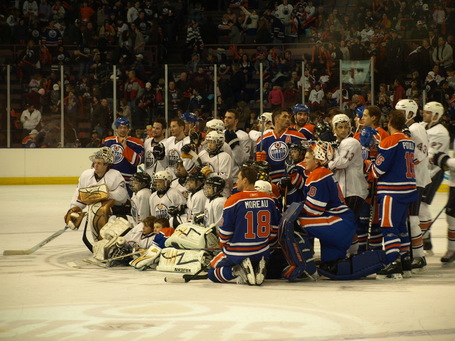 Former Oiler Patrick O'Sullivan signed a 1 year, 2 way deal with the Carolina Hurricanes on Friday. The deal will see O'Sullivan taking in $600,000 if playing at the NHL level and $105,000 if he plays in the AHL. It will be interesting to see what this year brings for O'Sullivan seeing that both the Oilers and the Phoenix Coyotes were apparently willing to buy out his contract.

The Oilers had some successes at the Rookie tournament with a 4-1 win over the Canucks, a 5-3 win over the Flames and a 4-3 loss to the Sharks. Many will agree that the real winners were the Oilers fans who were able to see the big three skating together and seperately. True it wasn't all brilliance, but there were some exciting goals and some bloody fights. Also, many of us were able to see some early September hockey on our televisions (well if you hooked up your computer in such a manner, or maybe used a gaming console) which was a welcome change from the dreary hockeyless summer.

A deal has been struck between Shaw cable and Roger's Sportsnet which was a relief to most Alberta hockey fans. Subscribers to Bell satellite, like me are still anxiously awaiting news, and hope that it won't be too far behind. Can it? If not I may need to find more Oilers' fans in Calgary with cable television.

Jordan Staal suffered a setback during his recovery and will not be starting the season with the rest of the Pittsburgh Penguins. This does not sound like a fun or painfree ordeal. Even though I am by no means a Penguins fan, hopefully Staal will see a speedy recovery.

In other news, Roberto Luongo has given up the captaincy of the Vancouver Canucks and rumours abound on who will be the next captain, much like the situation in Montreal and Edmonton.

The New Jersey Devils received more than a slap on the wrist, a stern warning and a raised eyebrow over the seemingly never ending Kovalchuk ordeal. Yup, the Devils have not only been fined $3 million and lost their 3rd round draft pick this year, but they will also lose their first round pick in one of the next 4 years. I was okay with the first two pieces of the punishment, but I think that losing their first round pick in one of the next 4 years is a little excessive. The Devils were definitely not the first, though they were seemingly the worst example of cap circumvention. I think that if there was to be punishment handed out, and it couldn't be for the Canucks, Hawks, Flyers and Bruins then stick with a fine and a late draft pick. Thankfully though, I don't make the rules because I would never ever be able to enforce them. I'd give in and fold at the first quivering lip or teary eyes.

In other NHL news the official NHL page had a little feature this week on some expected sleeper hitswhich included our very own Jordan Eberle. Perhaps it's because I, like many of your follow the Oilers' so closely, but I really didn't consider the chance of Eberle having a successful year, or of being in the spotlight as anything other than a certainty. Yes, you may be shaking your head and smiling right now, thinking "But Lisa, he's still not proven, anything can happen!" Well I tell you then, that in my world, he is and this year is going to be great. That's right, this will be a fantastic year for Eberle fans and of course Oilers' fans in general. We may still see more losses than wins, but will we ever have fun while it happens.

Many people are already projecting which teams will or won't make the playoffs. This is a very intruiging concept to me, the puck hasn't even dropped on the pre-season and there are still so many question marks with several teams. Yes, some teams will be easy to guess whether or not they will make the post-season, but I am certain there will be some surprises.

"I wouldn't be a distraction," says Souray, but it's evidently too late for that. . . - Cult of Hockey

THIS JUST IN: BURNS AND THE OILERS NOT DEAD YET - Oilers Nation

COGLIANO: REFOCUSED AND CONFIDENT IN HIS FACEOFFS! - Oilers Nation

What The Hell Is This? - BDHS

It's Getting Clearer / Rookies Go To Training Camp - Oilers Jambalaya

In and around Edmonton this weekend there is of course the Oilers training camp and the fan favourite Joey Moss cup to be held this Tuesday.

There will be plenty of concerts for the musically inclined this week, Against Me! (who I always find entertaining) will be playing the Edmonton Events Centre on Sunday, Justin Bieber (who I had never heard of until he was on SNL) hits Rexall this Sunday also. Personally I would take the punk show over the kid show, but that's just me. 30 seconds to Mars which still features actor/singer Jared Leto (I still think he was best in My So Called Life) will be playing the Edmonton Events Centre on Monday, and Herman's Hermits at the Century Casino on Thursday. I will be seeing this show in Calgary; the always different, usually shocking stage antics of The Flaming Lips comes to Alberta this week with a stop in Edmonton on Friday. If metal is more your thing, The Black Label Society will be playing the Expo Centre at Northlands and on the opposite end of the spectrum Blitzen Trapper hits the Stalite Room the same night. If you are into ABBA and dancing, Mamma Mia kicks off its run at the Northern Alberta Jubilee Auditorium and we know that the Citadel season is soon to begin. So, I really don't want to hear anyone say that there isn't anything to see or do in Edmonton, especially not this week.

If you are looking for more sports, don't forget that the Oilers play their first pre-season game against the Lightning at Rexall on Thursday, the UofA soccer team plays Calgary and Lethbridge this weekend, while the football team plays Saturday as well. The Oil Kings take to the ice against Red Deer on Friday if you just can't get enough hockey. I was adding this section to remind you that yes, we are here, the start of the hockey season!