Share All sharing options for: Robert Nilsson: The Lost Kid

In the spring of 2008 the injury-riddled Edmonton Oilers went on a remarkable late-season surge that brought them within three points of a playoff berth. The club's hot streak coincided with the emergence of the (new) Kid Line, consisting of rookies Sam Gagner (18) and Andrew Cogliano (20), along with the recently acquired Robert Nilsson (just turned 23). The trio were first round draft picks of high offensive pedigree, and when united, they found some instant chemistry that helped to power that stretch drive. Although the team ultimately fell short, they had engendered in their fan base a new hope for the future that was solidly centred on "the Kids".

As the oldest of the three, Nilsson was the first to require a new contract and therefore the first to raise the bar of expectations. Banking on his solid second half and imagined future growth, the organization rewarded him in the summer of '08 with a three year, $6 MM pact which seemed like a solid bet at the time. Two years later, "Row-bert" is gone, bought out of the final year and now plying his trade in the KHL. What happened?

Whatever it was, it seems to have affected all three of the Kids. Who would have guessed after that glorious stretch run that all three guys would see their points totals regress in subsequent seasons? Gagner scored 49 points that season, Cogliano 45, Nilsson 41. Even a hopeless pessimist would never have foretold those numbers would remain the career highs for all three guys, two chaotic seasons later. In fact, none of them has come within 8 points of matching the output of their first season in Edmonton.

We've already had a close look at the three-year statistical performance of Gagner and Cogliano, including a detailed comparison between the two. I think it's worthwhile to extend that type of study to the third guy on the line, the kid that got away. What was it that stalled Robert Nilsson's development?

The crux of the problem lies right here. Nilsson was well down the list of Oiler forwards in both GP and in ice time per game, ranking 7th to 10th every year in each of these core categories. Some of those games missed were "coach's decision" which Nilsson fans might debate were not warranted, but there were also illness and concussion issues. Nilsson didn't gain the trust of either coach to be either an every-game player or to play big minutes when he was in there, getting third-line minutes at evens and on the PP, and no minutes at all on the PK. Add it all up and he was 9th among Oiler forwards in total ice time each year, despite ranking considerably higher than that on the payroll.

Nilsson's goal totals stagnated at just ~10 a year, while his assist and point totals both dropped off significantly, to well under a point every two games his last two years here.

Nilsson's Relative Corsi was solid each year (although barely top 6 quality), but that was due in large part to the quality of his minutes. Pat Quinn could hardly have sheltered him any more in 2009-10, at least in terms of traditional, +/- based QualComp and QualTeam, yet Bobby posted a subterranean -17.

Like everything else so far, these numbers linger in the 7-10 range on the team, not impressive for a player of Nilsson's role, experience and salary.

Here's a big part of the explanation for that awful minus last season as the percentages really caught up with Nilsson at both ends of the ice. A 50-point dip in PDO will leave a hole in anybody's +/-.

Row-bert's best skill is in making the pass that leads directly to a goal, as can be seen in his primary assist numbers here. He was unable to maintain his outstanding production numbers in that magical 2007-08 run, but remained one of the best primary setup men on the team. For whatever reason his secondary assists dried up almost completely.

Both offensive and defensive numbers trended strongly in the wrong direction. These results largely parallel Nilsson's erratic PDO, so it's not impossible or even unlikely he would've bounced back with much better numbers in 2010-11.

Not a factor in any of these categories really, with lots of double digit rankings. He performed OK in terms of staying out of the box; some would attribute that to a lack of compete, although to my eye he was a responsible but clean defensive player. Still, for an alleged offensive weapon he didn't make the opposition take him down near often enough.

Fairly protected in ZoneStarts, but the play trended back to the middle of the ice. A small negative Zone Differential in each season doesn't much support that Row-bert was driving the play in a positive direction.

Pretty decent numbers in 2008-09, but poor to dismal the other two years. Ranked out of 9 in all cases, meaning Nilsson was nearer the bottom of the pecking order than the top in most categories.

I have to admit being a little surprised by the across-the-board mediocrity of Nilsson's output. He always seemed to have decent Corsi stats that are often suggestive of a player with solid underlying numbers, and I expected he would fare a lot better under this type of analysis than he actually does. As one who was happy when the contract was signed, and who a year later called him the Oiler most likely to surprise in 2009-10, I must confess to being completely fooled by Nilsson's magic.

Even today I think there's a real player in there who could eventually be a useful soft-minutes killer in the NHL, but fact is Robert was given that opportunity here and put up underwhelming results over an extended period. Under normal circumstances I suspect the likable young man with family ties to the dynasty Oilers would have received the opportunity to play out his contract; however the surfeit of younger, even more talented wingers in the system coupled with the Oilers' DFL finish and imperative for change hastened his departure. Arguably, Nilsson's results here effectively establish what is "replacement level" for the newcomers. A crushing disappointment to those Oiler fans who saw the flashes of brilliance and waited in vain for a star to emerge. 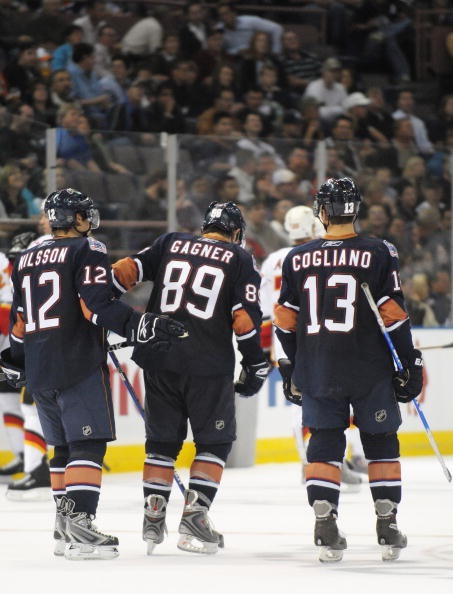 The Kid Line has skated into the sunset. via view2.picapp.com