Tales From the Road: Chicago!

Share All sharing options for: Tales From the Road: Chicago!

This one was my favourite trip so far. I had looked at the schedule and watched for a good time to go as soon as I got home from my trip to Vancouver, and so in the spring of 2009 I got on a plane. Why Chicago? There was always something about the city calling to me. I had always thought that a Ferris Bueller's Day Off would be great! Al Capone called Chicago home, the ferris wheel was invented there for the World's Fair, the list goes on and on. What really made this trip, however, was being in the city when the Blackhawks were about to go to the playoffs for the first time in too many years. It's not like there were jerseys everywhere, but the hockey fans in the city were definitely starting to get excited, and why not? The Blackhawks' games were also being televised for the first time!

The city of Chicago itself is worth seeing: the art, the architecture, the other sports teams... I had a great time there, and my friend who came with me has since gone back to see some of what we missed. Make sure you don't skip the boat architectural tour; that was one of my best memories.

Game night. I'm dressed in my jersey and climbing into a cab. My friend who came along wasn't a hockey fan, or at least not a fan of any particular team. Anyway, I'm climbing into a cab and what do we hear? Are you girls going to the United Center? I turn around and what do I see? A man opening his jacket. I cringe, but there was no need - it's a beautiful new Reebok Oiler jersey. We sent our cab away and started talking to this man, who it turns out, is from Edmonton but moved to the States for his wife. The couple drove into Chicago for the game that weekend as it's the closest he can get to his Oilers in his new life; so we decided to ride down to the arena together. I was sad when I saw that the United Center is situated in a neighbourhood less friendly and more industrial than Rexall. We definitely were going to have to go back downtown for post-game drinks and food. At least parking was relatively cheap, and it was fairly accessible in terms of traffic. 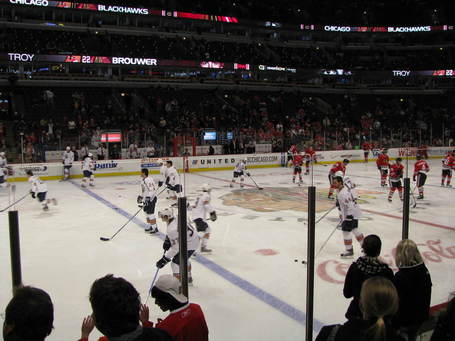 Upon finding our seats, my pal and I heard "oh no, we have to sit in front of Oilers' fans?" Followed of course by laughter. I turned to the voice and asked if he knew how long I had waited for the game and how far I had traveled. That's all it took to make another couple of friends, who ended up buying us beer for the entire game. The rest of the fans were fantastic too. Some of them weren't too familiar with the meaning of some hockey rules, and I knew more about some of the members of the Blackhawks than quite a few in the crowd. As the game continued, I provided all kinds of reasons for making each of the Oilers one of my favourites, and everyone around me knew we were in from out of town. The music really stood out for me. There was still a mixture of some classics and more modern tunes, but what a goal song! This was the first season of the Chelsea Dagger goal song. I would get excited when the Hawks scored just so I could sing along with the rest of the crowd. I really have to give the Blackhawks props for this selection. It's something that is very easy to sing along with, it's catchy, and it really doesn't matter what kind of music you like, chances are you wouldn't take offense to the tune.

As for the game itself, what a blast! There were some tense moments when Roloson went down, and wasn't getting up. Thankfully he was okay, but it was difficult not knowing. The score was very close through all three periods, then overtime, then... the shootout! Chicago knew they were in the playoffs, just trying to get home ice advantage. The Oilers were playing for pride, although we weren't mathematically out of the playoffs quite yet. In the end, the Oilers won, and I was on cloud nine. Leaving the game and walking through the wide, wide concourse Chicago fans were still full of smiles and high fives. The people traffic flowed very well, despite all of the tables set up to sell fans season tickets, run silent auctions or put out anything else that was set up. 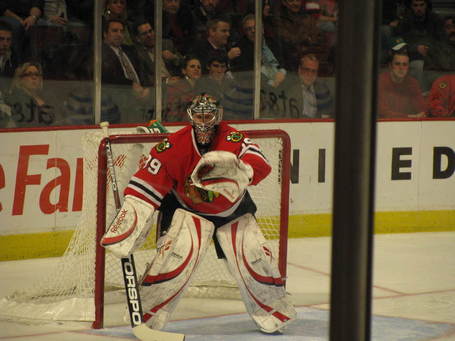 The building just felt much bigger than the Alberta arenas. The food and beverage vendors were plentiful and the lineups weren't too long or frustrating. The bathrooms were large too, and there definitely seemed to be more of them than what we have in either Alberta rink. Overall, I loved the United Center. You may wonder if this was just because I was in the USA and it was for a hockey game; well I went back the next night to watch the L.A. Lakers play the Chicago Bulls. There were far more people there, but traffic still moved nicely. I was able to make purchases and move around without any major issues. 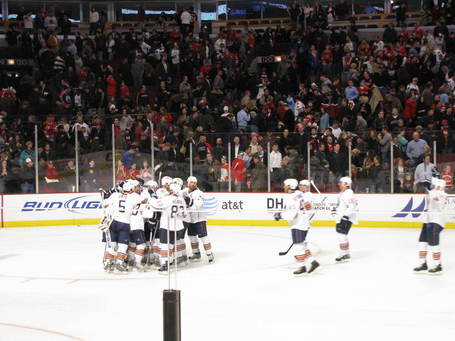