These are the Keystone Kops. If you look closely, you will notice Steve Tambellini and Kevin Lowe in the back, behind Allan Watt, seated at the desk. At one time, the writers here at The Copper & Blue thought that the Oilers' communication breakdowns were limited solely to their interactions with their prospects, a serious disconnect between the management of the present and the future of the organization. But then Sheldon Souray spoke out last Spring by publicly demanding a trade from an organization that he claimed completely ignored him after breaking his hand on Jarome Iginla's helmet. At the time I said:

That he and Tambellini haven't talked since January isn't a surprise in most quarters on the 'sphere. Openness and transparency, even amongst their own employees, is not a priority in the organization. Considering the other issues we've seen in this area, this is plausible.

Ben took the time to document the litany of breakdowns in communication between Edmonton management, and well, half of the western world. He ended with an analysis of the Souray situation:

Bull. Sheldon's no Chris Pronger: he's been a character guy throughout his career and wore the A without incident or altercation in Edmonton as well as elsewhere. His accusations jive with everything we've ever heard, with the histories of young men like Jarret Stoll, Ales Hemsky, Shawn Horcoff and others who have been thrown into the lineup while injured and suffered long-term consequences for it because they're "leaders". The communication issues? Steve Tambellini not having talked to Souray since January? How does that not sound like business as usual? The Oilers, meanwhile, in spite of their best efforts to clamp down on the public knowing anything about their business, have clear effort of yanking the chains of members of their organization.

It's become an Edmonton tradition, this bizarre dance of secrecy, obfuscation, and cover-up, all of which is followed by the media manipulation that's attempted to turn the fanbase against nearly every departed Oiler, including Ryan Smyth. I'm honestly surprised that upon his signing with the Blackhawks, the Edmonton media didn't report that Fernando Pisani had defecated on the 1985 Stanley Cup Banner during his negotiations with the team, the final straw in a troubled relationship. The problem, at least from the Oilers' point of view, is that there is no controlling the message anymore. Even when the local media refuses to report the story, agents and players have instant access to message distribution via Twitter and blogs.

All of this brings us to today's Keystone Cops episode entitled: Slip Sheldon Away.

This evening, we learned via TSN that Souray skated with his teammates today at Rexall as a precursor to the to training camp. Souray told reporters he'd put his April interview behind him and that he was moving on.

"I'm a professional and I'm going to come to camp and try to help the team whatever way I can. I've got to get myself back to the player that I want to be. It's been a frustrating past three years for me because of injuries that I've had to deal with."

A professional? Perhaps he wasn't a professional in the original interview when he trashed the organization before demanding a trade, thereby completely destroying his trade value. Most Edmonton fans still hold Souray in some level of contempt for doing so. Right or wrong, Souray saw that the nuclear option was ineffective and did the only thing he could do since failing to force a trade: he came back, presumably shamed, but he was going to put the work in.

Then the Kops arrived. Shortly after TSN published the article, the Oilers official Twitter account lit up with this (I've taken a screenshot because Tweets can be deleted): 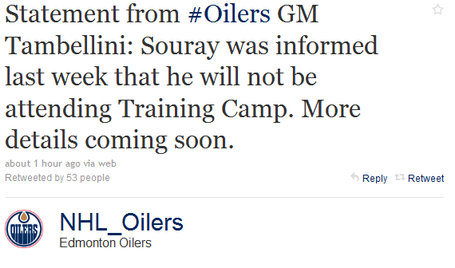 The first thought out of everyone's keyboard, at least on Twitter was one of embarrassment for Souray, somewhat akin to feeling badly for a guy that won't give up after being rejected by a woman. Some fans laughed and some thought it was good for Souray to learn a lesson. But as I said before, the Oilers can no longer control the message, nor manipulate the story via the local media. So I was not at all surprised when Souray's team answered back immediately via Twitter. Daren Millard responded to the situation about twenty minutes after the Oilers announcement and said Souray's agent was notified today that he wasn't wanted in camp. Darren Dreger reported Souray got an e-mail today declaring him persona non grata at camp. So if Tambellini sent word last week that Souray wasn't invited to camp, it takes the Edmonton Oilers management team longer to send an email to a player than it took Dale Tallon to overnight offer sheets to his players.

Typically, reporters and fans would believe the team and/or team representatives. But there's this nagging problem of communication breakdowns within Oiler management. And though the ones talked about in the links above were with players and prospects, just three months ago Steve Tambellini forgot to tell Pat Quinn that he was fired. As Scott talked about at the time, Tambellini was caught in a web of his own words when it came to his coaching succession plan and Quinn's ousting. To make matters worse, by his own words, Quinn was never informed of the plan until Renney was put in place. Quinn's handling is the cherry on top of the communications meltdown sundae. It's easy to believe the team over a spurned and/or upset player when he trashes the organization. It's less easy to believe the team over young prospects, even those that might not understand the goings on of upper management, contract negotiations, and advanced coaching and motivational tactics. It's completely impossible to believe the team over Pat Quinn, a hockey mensch if there ever was one, especially when the team's own contradictory words are on the record for all of the world to see.

The worst part about the entire mess is the management cabal's complete lack of foresight. I said it was the worst part about the entire mess, not the most surprising. If Tambellini, Lowe, Katz, LaForge and whoever else gets to make decisions didn't want Souray in camp, why wouldn't they inform Souray and agent Paul Theofanous of this in April? It's not as though the playoffs were taking up their time. Or May? What about June? They did nothing with the roster after Kurtis Foster was signed, perhaps they could have sent word in July? August was a slow month for the entire NHL, maybe the e-mail could've gone out then? Edmonton's management team had five months to tell Souray that they don't take kindly to his kind 'round these parts, yet they did nothing. Instead, they wait for the player to show up at camp, hastily throw an email together, then declare the player foolish via twitter. It was followed by (yet another) last-minute press conference in which Steve Tambellini is caught like a deer in headlights. This ridiculous show has become commonplace in Edmonton; it seems to happen on a monthly basis. Every time I see Tambellini at the podium, I immediately hear:

"I did the whistling belly-button trick at the high school talent show? Bing! Got the shingles real bad senior year, almost didn’t graduate? Bing, again. I dated your sister Mary Pat a couple times until you told me not to anymore? Well?"

Tambellini got his side of the story in during a radio interview on 630 CHED, found here. He claims he was clear with Souray's agent "...last week, multiple times, and talked about what was best..." in a wholly unconvincing fashion, and then quickly veers away to his message about his new favorite word: he wanted "clarity" coming into camp next week. Of course, the best way for management to be clear about their plans for training camp is to wait until two weeks before players report to have clarity. Clarity is so important to Tambellini that the succession plan for Pat Quinn is going gangbusters. By that I mean Quinn has no idea what he's going to do with Edmonton now, but it was all part of the succession plan, you know.

Now the Oilers are left holding the $9,000,000 bag consisting of Sheldon Souray's contract. Quick hit analysis says the only way out is re-entry waivers, meaning that a team claiming poverty in Edmonton is about to toss $4,000,000+ down the drain. All because the team wasn't able to mend fences, even if only as a media front, with the player. Instead, they do what this group has always done, this bizarre dance of secrecy, obfuscation, and cover-up.

Just for fun, I looked up the Keystone Kops on Wikipedia. The description:

The Keystone Kops featured in a series of silent film comedies about a totally incompetent group of...