Share All sharing options for: 2008 Draft - Forwards and NHLE

Over the last few days, I've evaluated all of the forwards drafted in 2009 and  in 2010 using NHL equivalencies, a tool developed by Gabriel Desjardins to measure how much offense a given player would bring to the NHL based on how much he scored in a lower league.  By observing how much offense players have brought to the NHL from a given league in the past, we can estimate how much NHL offense we can expect from players currently playing in those lower leagues.  It's an imperfect assessment of player skill - we're just measuring offense after all - and I think it's generally a better measure for forwards than it is for defenders (or goalies!), but it's one indicator as to whether or not players will succeed, especially offensively, in the NHL.  Today I'll be looking at the forwards drafted in 2008, following up on a similar study that was done in January.

Before I go ahead and put up the chart a bit more explanation is needed.  Not all of the players drafted in 2008 were the same age.  In fact, several players had already passed through the draft at least once (and sometimes twice) before getting selected in 2008.  All of these older players are included in the chart but are marked in yellow.  Those who were drafted as overagers in 2009 or 2010 but were eligible in 2008 are also included with "N/A" written in the "Draft Number" column.  If 2008 was their first year of eligibility, the yellow highlighting disappears.  The "Draft Number" column itself is also not the player's actual draft position but the player's draft position among forwards.  So, for example, Jordan Eberle was drafted by the Edmonton Oilers 22nd overall but was the 11th forward to be drafted, so his "Draft Number" in the chart is "11".  The "team" column is for the team that drafted the player, rather than the player who holds his rights; more often than not it's the same club, but I felt like I should point that out.  Finally, the "Rank" column is the players organized according to their NHLE, which is based on the offense each player put up in his respective league during the 2009-10 season.  I broke the chart into four portions so it would be easier to read, but it's still quite small.  You can click on each quarter of the chart if you want to enlarge it. 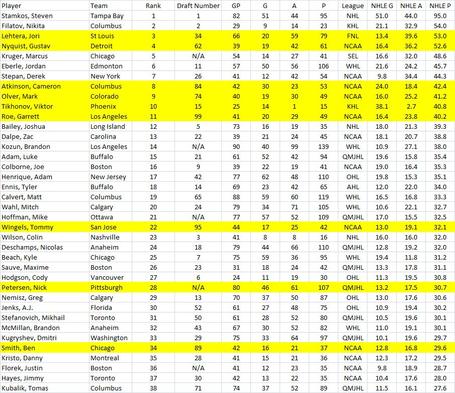 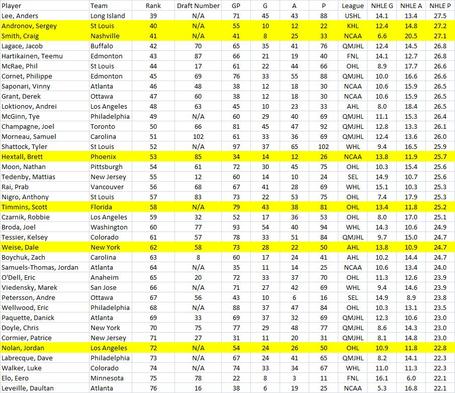 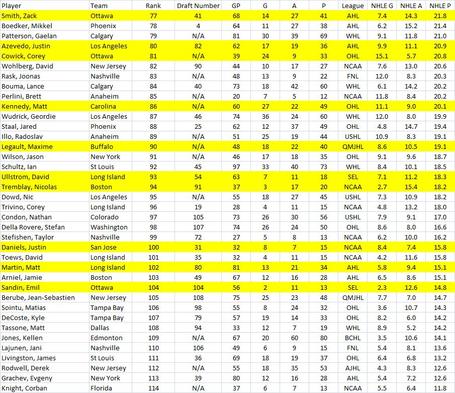 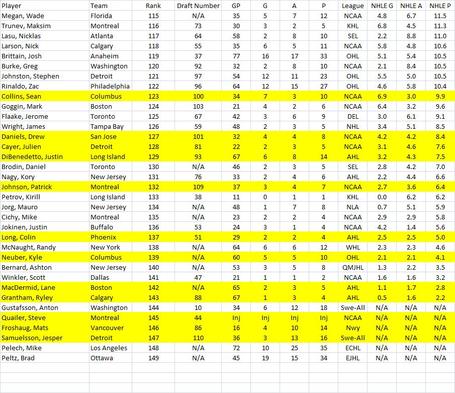 My goodness.  Steven Stamkos is just lapping the field with this one.  His incredible sophomore season earned him the Richard Trophy and at least a few votes for the Hart.  When he's compared to players his own age, the gap is laughable.  It's amazing to think about how far he still has to go!  It seems like the Lightning have found themselves a pretty special player.

There are a couple of players who were eligible in 2008 that didn't get picked until 2009 who look very good by this measure, but before I get back to them I wanted to go back and bring up Justin Florek.  Florek was just drafted in 2010 and had the 12th best NHLE of any player drafted.  But when he's compared to players his own age, he falls all the way to 36th.  Now, 36th is still pretty good, and the kid is still 6'4'', so I still think the Bruins made a great choice to take him in the fifth round, but this should illustrate that age does in fact make a big difference.  Nearly a point per game in the NCAA at age 18 implies a much better player than nearly a point per game at age 20.

Back to the players who only missed one year of eligibility, let's start with Marcus Kruger.  Kruger passed through the 2008 draft after a mediocre 2007-08 season in Sweden's U20 league and played in the U20 league again in 2008-09, wearing the captain's "C" and improving his offense enough to get drafted by the Chicago Blackhawks.  2009-10 was his SEL debut, and boy was it ever impressive.  The Hawks have signed him to an entry-level contract already which starts ticking this season, but my understanding is that he's planning to spend another year in Europe, which is pretty surprising to me considering the holes at the bottom of their lineup.  Two other Hawks who have a chance to take advantage this year are Ben Smith, who's already twenty-two years old, and Kyle Beach.  I remember questions around Beach's character before the draft, but he's a big bruising player who brought very good offense at the junior level.  I'd actually be surprised if he didn't make the team.

The other player who passed through the draft in 2008 sitting near the top of the chart is Brandon Kozun who fell all the way into the sixth round of the 2009 draft as well, almost exclusively because of his size.  He was eventually scooped up by the Los Angeles Kings, the very same club that took Jordan Weal in 2010.  The CHL has a long history of small forwards who flame out once they get to pro hockey, but betting on guys with superlative talent is a pretty darn good strategy once you're out of the top fifty picks.  If one of those two can bring their offense to the NHL, the Kings are going to be laughing.

But scoring in junior doesn't always translate to the bigs, and some of these numbers need to be taken with a grain or two of salt.  The players who are putting up offense against older competition in the NHL, AHL, European pro leagues or NCAA are much more impressive than those who are doing so in the Major Junior leagues, even after the NHLE adjustments.  Take a guy like Evgeny Grachev who scored 105 points in 79 OHL games in 2008-09 for an NHLE point projection of 39.9.  This year he played in the AHL and scored only 28 points in 80 games.  Mikkel Boedker is another player who posted fantastic totals in junior but has struggled since turning pro.  Boedker scored 102 points in 82 OHL games in his draft year (2007-08), and was the fourth forward selected in the draft.  Despite the gaudy numbers and the solid pedigree, two years later Boedker could only manage 38 points in 64 AHL games.  There will be players on this list with huge counting numbers who just can't make it at the next level.  Maybe Brandon Kozun is too small.  Maybe Luke Adam's skating really isn't good enough.  Maybe Adam Henrique's stats are being padded by playing for a stacked team.  Maybe Jordan Eberle really is missing that one elite skill.  It's unfortunate, but it's true: some of the guys in the top quarter of the list aren't going to make it.

Which brings us to the Oilers.  Jordan Eberle looks fantastic sitting near the top of the list, and I'm most definitely encouraged by his success in limited AHL minutes.  He's not a sure thing, and that's good to keep in mind, but you really couldn't have asked for a better season in 2009-10.  The other Oiler prospects are in a position where there's a chance, but it's proabably something less than 50/50.  Teemu Hartikainen and Philippe Cornet have both signed pro contracts with the Oilers, and both guys will be starting in the minors.  Despite very similar NHLE numbers, Hartikainen is ranked 10th in the Oilers' organization by the writers here at The Copper and Blue, while Cornet is way down at 23rd.  Why the discrepancy?  Well, Hartikainen is the bigger, more physical player.  He also put up his results against men in a professional league.  And he put up these numbers while completing his military service.  Finally, it seems that the organization also sees a bit more in Hartikainen, seeing as they're playing him very well.  And yet, Hartikainen may still be less than 50/50 to have an NHL career, which is a pretty big step up from Kellen Jones.  The Oilers took the undersized forward in 2010.  Heck, they even traded to get him.  It seems like an odd choice to me.  The numbers here suggest that Jones is well back of his peers in terms of offensive development, ostensibly one of his better skills.  On the bright side, at least the Oilers didn't trade up to take Anton Gustafsson.  I know he's had some injuries, but that's really ugly.