Share All sharing options for: 2009 Draft - Forwards and NHLE

A couple of days ago I looked at all of the forwards drafted in 2010 by taking a gander at their NHL equivalencies, a tool developed by Gabriel Desjardins to measure how much offense a given player would bring to the NHL based on how much he scored in a lower league.  By observing how much offense other players brought from their previous league, we can estimate how much offense we can expect from players in the future.  It's an imperfect assessment of player skill for sure - we're just measuring offense after all - and I think it's generally a better measure for forwards than it is for defenders (and goalies!), but it's one indicator as to whether or not players will succeed, especially offensively, in the NHL.  But that wasn't the first foray into this kind of exercise.  About half-way through the season I looked back at the draft classes of 2007, 2008, and 2009 and measured them using the same tool.  Over the next few days, I'll be updating that data, and offering some commentary.  I begin today with a look back at the forwards drafted in 2009.

Before I go ahead and put up the chart a bit more explanation is needed.  Just as in 2010, not all of the players drafted in 2009 were the same age.  Several players had already passed through the draft at least once (and sometimes twice).  All of these older players are included in the chart but are marked in yellow.  Those who were drafted as overagers in 2010 are also included with "N/A" written in the "Draft Number" column.  If 2009 was their first year of eligibility, the yellow highlighting disappears.  The "Draft Number" column itself is also not the player's actual draft position but the player's draft position among forwards.  So, for example, Magnus Paajarvi-Svensson was drafted by the Edmonton Oilers 10th overall but was the 7th forward to be drafted, so his "Draft Number" in the chart is "7".  The "team" column is for the team that drafted the player, rather than the player who holds his rights.  More often than not it's the same club, but I felt like I should point that out.  Finally, the "Rank" column is the players organized according to their NHLE.  I broke the chart into four portions so it would be easier to read, but it's still quite small.  You can click on each quarter of the chart if you want to enlarge it. 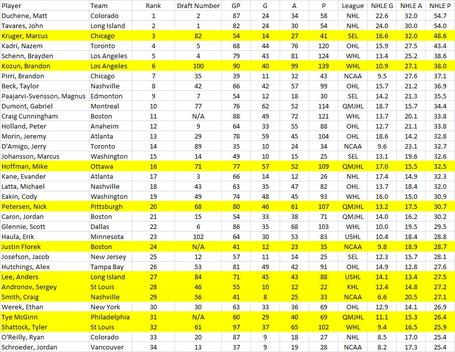 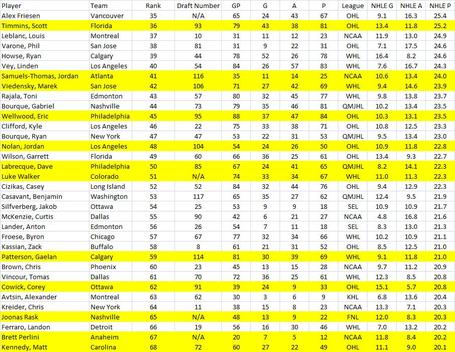 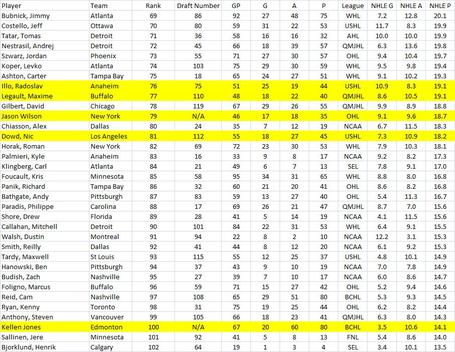 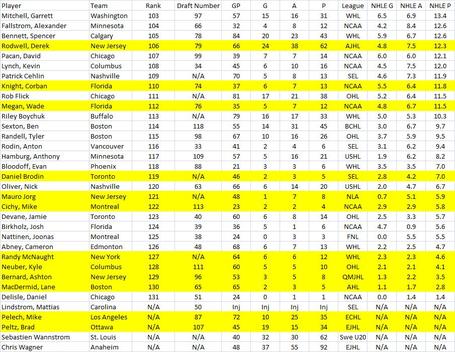 One important thing to remember with this list is that, even though we're accounting for league difficulty, the kids in major junior have an advantage on the kids playing in the NCAA or playing pro hockey.  Several of the players who might be considered disappointments are guys in the NCAA who may not be getting the kind of ice time they need to succeed.  They're also playing against much older competition, which makes success more difficult.  In fact, when I looked at the NHLE of NCAA players over the last few seasons, I saw that players brought more of their offense if they came to the NHL at a younger age.  Of course, a lot of these NCAA players were also drafted out of an American high school or lesser Canadian junior leagues, and those players tend to succeed at a much lower rate.  It may be that the player is off to a slow start, but it may also be that he's never going to speed up.

What does all of that mean?  It means that the seasons put up by Brandon Pirri and Jerry D'Amigo are particularly impressive.  Neither player is particularly big, and both of them could struggle once arriving in the NHL, but by putting up that kind of offense in the NCAA at such a young age, they've shown that their skill is enough to get results against bigger and stronger opponents.  It also means that highly-rated players like Zach Budish, Drew Shore, Kyle Palmieri, Alex Chiasson, and Chris Kreider should be given some extra slack.  Kreider in particular deserves some extra leeway considering his mid-season splits.  When I looked at the results in January, Kreider's boxcars were only 2-3-5 in 17 GP.  Since then, Kreider scored 13-5-18 in 21 GP, a very nice increase in production, and something to build on for next season.  The other guys?  They were pretty consistent in both halves and will need to be much better next season to justify being one of the top thirty forwards selected in the draft.

One player I feel compelled to mention is Nazem Kadri.  Here's a guy that has taken a lot of flack since being selected primarily because, (1) he was selected by the Maple Leafs, (2) the Leafs reached a bit to take him, and (3) he was pretty poor at the World Juniors last Christmas.  The thing is, his results in junior are outstanding.  I remember watching him at Christmas, and yes, there are flaws in his game, but the player has a whole lot of skill too.  Another player who sometimes gets mentioned as a disappointment but isn't is Evander Kane.  He may be well down the list here, but let's remember that he put up those results in the NHL, and didn't get any power play time to help pad the stats.  25 even strength points (the one left over was shorthanded) in 66 games is a darn good rookie performance.  One team that may be disappointed is the Dallas Stars; one that surely is disappointed is the Buffalo Sabres.  I'm sure the Stars expected a bigger year from Scott Glennie, although just like Kreider, Glennie's second half was huge.  He scored 45 points in 43 games to open the WHL season, but then exploded for 58 points in the last 43 games.  Kassian... not so much.  The guy is huge and he sure can fight, so not all of his value comes from offense, but he actually took a step back in that department from 2008-09, on top of getting suspended for half the season and arrested after the year was over.  It wasn't a good year for him.

A bunch of guys who did do well are the overagers.  I won't look at them in depth here, but will take a closer look at those who are able to hold a strong position once they're compared to players the same age.  The one guy who did that from the 2010 is Craig Cunningham who lasted all the way to the fourth round (97th overall) in June.  I know the guy isn't big, but getting one of the top fifteen scorers from the 2009 draft class is nothing to shake a stick at.  He may not be able to score against men like he has against juniors, but that's a nice high-reward pick by the Bruins.

Finally, the Oilers.  Just like with Tyler Pitlick from the 2010 draft - although he's another young NCAA guy - Anton Lander is a player who just isn't bringing the offense like you'd hope for a player drafted so high.  Now, he is playing in the Swedish Elite League, and that's a tough league for a young player, but there are players his age who succeeded there (he's the fifth ranked Swede on the list), and it's not as though Lander was hurting for ice time.  I really like the player, but offense is what's going to most hold him back.  Let's hope for a big year from him in 2010-11.  One of those other Swedes is Oiler selection Magnus Paajarvi-Svensson.  Now, I'm in no way dissatisfied with his performance but when the forward chosen 7th scores the 7th most points, it may be time to stop calling him an OMG steal.  I'm sure he would've been chosen higher than 10th overall if a re-draft were held today, but it's not like he'd go in the top five.  You know who'd go a lot lower in a re-draft?  Cameron Abney.  Way to not be last Cam!    My suggestion? What's done is done, but the next time Bob Brown has "an extreme passion" for a player, don't listen Stu.  Just don't listen.