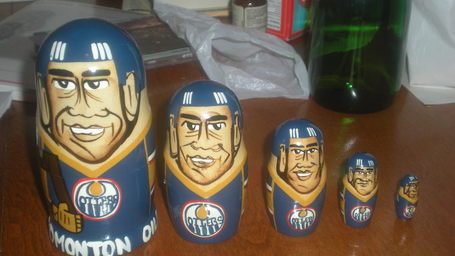 The first of two Red and White games at the Junior camp was played in St. John's on Friday night. The line of Sean Couturier, Louis Leblanc and Quinton Howden led the way in White's 6-3 win, but for Oilers' fans, the performance of Olivier Roy was a big part of the victory. Roy entered the game at the halfway mark with the score 4-2 in his team's favour and stopped 17 of 18 shots he faced, including one stretch in which he made three or four notable saves on right wingers who were in the clear. He looked very good when he was moving to his left and his rebound control was stellar.  There were a couple of times he went into the trapezoid behind his net, and he handled the puck effectively, showing some cool by choosing not to make a short pass; there were thankfully no misadventures. The only blemish was a goal by Zack Kassian (more on him later) during a scramble.

The handful of Oilers' fans (all shapes and sizes) in attendance were also treated to an interesting performance by Curtis Hamilton. With his team taking it on the chin, dominated by two of Team White's lines, Hamilton played well defensively. He showed the ability to get the puck out of his own zone safely and effectively on a couple of occasions. Team White had scored two early goals, including one thirty-five seconds in, before I realized I'd better watch to see if he was a minus or plus. He wasn't on the ice for any goals against as far as I can determine.

Hamilton's not going to earn a spot on this team by shooting out the lights; there are plenty of guys who can do that. He needs to understand that his role on this team will be to play well defensively, and he seems to get it. Curtis had to cover one of his defencemen on a pinch, replacing at the point and he defended well, all the way back to his own corner. He seemed to understand his responsibilities and showed the smarts that Oilers' GM Steve Tambellini talked about after the draft.

Both Oiler prospects played well, especially Roy, but others stole the show. With Habs fans chanting Loo-ee during the third period Louis Leblanc exhibited some speed and a sniper's touch, but it was Sean Couturier who made that line go. Couturier showed why he's so highly rated for next year's draft; he won face-offs, dished the puck effectively and created an easy tap-in for Leblanc with a nifty foray into the Red zone. The other line that dominated was the combo of Brayden Schenn, Scott Glennie and Kyle Clifford, who were moving the puck well and always seemed to be on the offense. Clifford quietly went about his business, notching two assists and looking strong with the two Brandon stars. The best players for the Red team last night were Ryan Johansen with two assists and Jeff Skinner, who wowed the crowd in the first period with a "Skinner-rama" move in the face-off circle that Denis Savard and Danny Gallivan would have enjoyed.

Now back to Zack Kassian. Despite scoring a goal, I didn't like his play last night. He is a big guy, of that there is no doubt. But he's slow and dirty. His cheap shot  stick work on Erik Gudbranson late in the game needs to be addressed by the coaching staff. It was unnecessary and not the sort of thing you do to a team-mate. Gudbranson stood up to him shortly after, but likely would have had his head handed to him if they had dropped the gloves. Gudbranson will prove to be one of the leaders of this team and doesn't need to be injured by a bush play made by a lazy forward.

There was a fan-friendly shootout  after the game and Olivier Roy stopped six of the ten shots he faced, but it seemed like everyone was half-hearted about the exercise. Game 2 goes tonight and I expect Roy will start this time.