Share All sharing options for: 2010 Draft - Forwards and NHLE

One of my favourite tools in evaluating prospects is Gabriel Desjardins' NHL equivalencies. The basic premise is that we can expect each player to bring a portion of his offense with him from the league he's currently playing in to the NHL. By observing how much offense other players brought from their previous league, we can estimate how much offense we can expect from players in the future. It's an imperfect assessment of player skill for sure - we're just measuring offense after all - and I think it's generally a better measure for forwards than it is for defenders (and goalies!), but it's one indicator as to whether or not players will succeed, especially offensively, in the NHL. After the jump I'll explain the system with a bit more depth and look at what each of the forwards drafted in 2010 did last year.

In the chart below, I've taken each player's goals, assists and points, converted them to a "per game" rate, multiplied them by the league equivalency number, and then expressed them as an "NHL equivalency" assuming an 82-game season. As you may have guessed, each league has a different equivalency number. I've used this article for the translations from the NHL, KHL (multiply offense by 0.83), SEL (0.78), FNL (0.54), AHL (0.44), NCAA (0.41), WHL (0.30), OHL (0.30) and QMJHL (0.28). I've used this article for the translations from the USHL (0.27), AJHL (0.16), BCHL (0.14), and MJHL (0.14), and this article for the translations from Minnesota High School hockey. Unfortunately, there are a lot of leagues that don't have an NHL equivalency number yet. These include the U20 European leagues, any high school hockey outside Minnesota, the German second division, and some less popular North American junior leagues (the CCHL and the EJHL).

Before I go ahead and put up the chart a bit more explanation is needed. Firstly, not all of the players drafted in 2009 were the same age. Several players had already passed through the draft at least once (and sometimes twice). All of these older players are included in the chart but are marked in yellow. Second, the "Draft Number" column is not the player's actual draft position but the player's position among forwards. So, for example, Tyler Pitlick was drafted by the Edmonton Oilers 31st overall but was the 22nd forward to be drafted, so his "Draft Number" in the chart is "22". Third, the numbers may be slightly different than NHLE numbers you may have seen elsewhere for these players. That's because I included both regular season and playoff games in the results, which I think probably gives a better estimate. Finally, the "Rank" column is the players organized according to their NHLE. The second number in brackets includes all of the players who don't have an NHLE ranking by inserting them according to their draft number. I broke the chart into four portions so it would be easier to read, but it's still quite small. You can click on the chart if you want to enlarge it. 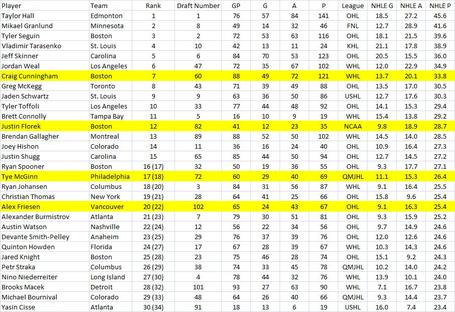 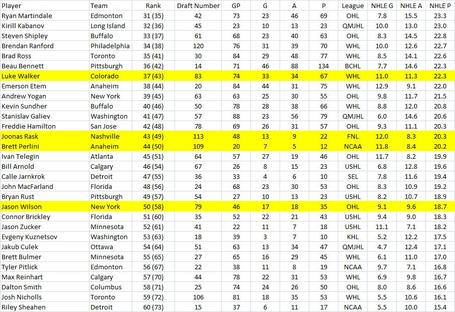 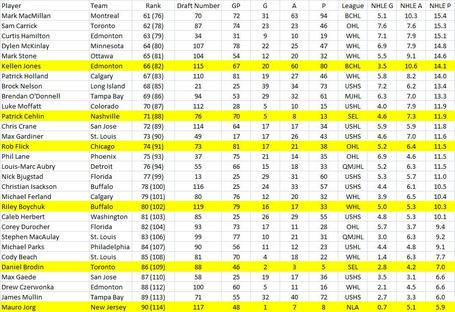 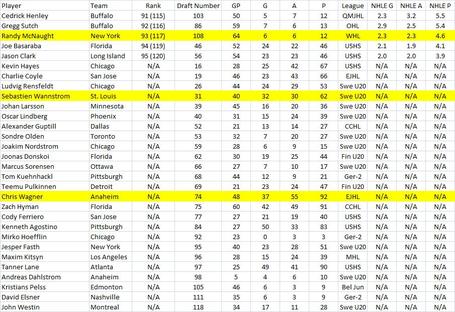 The first thing that stands out to me in this chart is that the NHLE system really dislikes high school hockey. Brock Nelson has the best NHLE of any of the Minnesota high school players with 73 points in only 25 games, but that still leaves him well down the list. I'll be interested to see how these highly-touted high school players perform in their first year of college. Will they take huge steps forward in their NHLE (which probably means that number could use an adjustment), or will they struggle? It's something to look forward to in a year's time.

Then there's the Boston Bruins. Granted, a couple of these players are overagers, but they've got five of the top twenty-five players by this measure, despite picking only two of the first twenty-five forwards. Their most interesting selection is overager Justin Florek. Most players who've passed through the draft twice (he was first eligible in 2008) have some kind of terrible flaw in their game. I'm not sure what that is with Florek though. He's put up pretty good offense in the NCAA at a reasonably young age and the guy is 6'4''. That's a pretty nice prospect to pick up in the fifth round (by comparison, the Oilers took Tyler Bunz).

Jordan Weal and Mikael Granlund both stand as reminders that you can't teach size. That's the primary concern for both players, and they both got beat down the list because of it. Granlund suffered much less, probably because he played against men this year in Finland and was tremendously successful. Weal, on the other hand, played Canadian Junior, so he fell quite all the way to the third round before getting picked by the L.A. Kings. The Kings had a really nice draft in the first three rounds at least. They took highly ranked defender Derek Forbort in the first round, and then scooped up Tyler Toffoli in the second, followed by Weal in the third. That's a lot of offensive potential for two picks in the middle rounds.

The players with disappointing offense? Nino Niederreiter, Ryan Johansen, and Alexander Burmistrov. All three players were chosen in the top ten despite offense that isn't at the top of their class. Both Niederreiter and Johansen were very young for this draft, and both of them have really good size, so I can understand why they jumped ahead of some of the other options. Burmistrov's talents are different, things like good speed and vision that I'd hope would show up a bit more in the offense. He's pretty old relative to the draft class, and he's not all that big. All three of these guys seem like reach picks to me, but Burmistrov is probably the one I like the least, considering the other options available.

The Oilers' draft picks have a mixed showing by this measure. Taylor Hall looks good, of course, and so does Ryan Martindale, but after that things go a bit sideways. Curtis Hamilton's struggles can likely be attributed to injury, while Kellen Jones and Drew Czerwonka look like poor choices (a small overager with less than incredible offense and a guy who just doesn't have any offense at all), but the real concern is Tyler Pitlick. In Derek's article on Ptilick he said: "I believe that Pitlick fell in the draft - even though the scouting reports didn't change - because he didn't post flashy numbers at Minnesota State." I'll have to agree with him. There are some good reasons for Pitllick to struggle in NCAA hockey - most notably that he's playing against much older players - but his offense is well down the list here, and at least for me, that's a real concern going forward. Hopefully the guy who "would've been drafted in the top ten" if he were 6'3'' can put up some big offensive numbers next year in the WHL.