Hamilton steps up at Junior Camp

Share All sharing options for: Hamilton steps up at Junior Camp

Curtis Hamilton had a good day at the Junior Camp this morning. He didn't shoot out any lights or dipsy-doodle around any defenders, just a real solid day.  His Red team was one man short during today's Special Teams scrimmage and Curtis impressed at both ends.  The drill was thirty minutes of Power Play for one team followed by thirty minutes for the other.

On the PP Hamilton  was double shifted, playing on a line with Ryan Johansen and Linden Vey, while both he and Joey Hishon got rolled onto a line with Tyler Seguin and Tyler Toffoli.  The most frequent D-pairing was Mark Pysyk and Brent Ponich. On the PK, Hamilton was teamed up with Jeff Skinner and they played well, not giving up many chances.

The great thing about Hamilton today was that he finished his checks. These practices aren't quite no-hitters but he was one of the only guys who was willing to use the body on the guys in the opposite sweaters.  Sometimes, that's just what you need to do to make the right play, and that's exactly what he did; you have to like that. Getting double-shifted hopefully gave him the chance to show the coaching staff that he can contribute in different ways. I repeat -he had a good day.

More on Day Two after the jump. 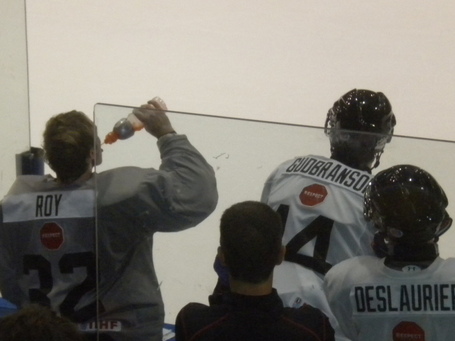 Olivier Roy also had a good day - he fished less pucks out of the net than the other guys - with one glaring exception: Roy played a loose puck very poorly and gave the puck to a penalty killer who had no problem scoring into the now-vacant net. Nonetheless, throughout the drills and scrimmage he continued to look good. He gave up major-league  "roof job" to Seguin on the PP but the Bulin Wall wouldn't have stopped it either. He seemed to put that bad clearing attempt behind him, but he needs to work on his puck-handling... like pretty much every Oiler goalie since Grant Fuhr.

The final score in this Special Teams game was 5-4 for Hamilton's Red team, and there were a couple of players who really strutted their stuff. The ones who really stood out were Carter Ashton, who scored the prettiest goal of the day, and Joey Hishon who looked really comfotable alongside Seguin. He scored a nifty goal too.  I mentioned Nathan Beaulieu yesterday and feel compelled to mention him again. He really is a great skater, who just needs to make sure his head keeps up with his feet.  We've all seen the kid defender with such great wheels on defense who needs to learn how to use them, and it looks like that'll be Beaulieu. He's prone to skating himself out of the offensive play or losing control of the puck as he skates by, but if I'm a fan in Saint John, New Brunswick - where he had 45 points and was +43 last year - I'm excited about this kid.

The two biggest noises in the rink today were one of Hamilton's hits and the groans after the empty-netter given up by Roy. For me, both Oiler kids earned praise for today's work.