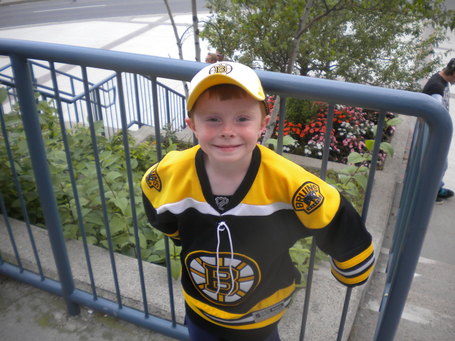 Well, I didn't really go to the St. John's Regatta but I did go to see the first night of practice at Hockey Canada's Development Camp in St. John's, Newfoundland and Labrador (NL).

While waiting for the doors to open I met a new wave of Bruins' fans. Judging from the Bruins' jerseys in the small crowd, many people were there to see the #2 pick. That's 6-year-old Cameron Christopher in the photo, whose newest favourite hockey player is Tyler Seguin. Guess which all-time great Bruin Cameron is named after.

I was kind of excited to be there - I was, after all, about to embark on my first post for the Copper & Blue. I was very interested in watching some of these guys perform, and especially the Oilers' representatives, goalie Olivier Roy and left winger Curtis Hamilton.

After a late start, the Red squad took to the ice first, creating a buzz in the small crowd. Did I mention it was a small crowd? It's hard to get people in St. John's to an arena on a beautiful evening with the Championship Race of the Regatta scheduled for the same time. I am sure that as the week goes on the crowds will increase. This bunch was there to see Tyler Seguin, who didn't disappoint anyone, especially the kid he tossed a puck to in the corner. He showed a great desire to have the puck, something I've always liked about a player. The practice was quick, lasting only about 25 minutes and it was hard to get a good feel for individuals.

Next up, the White team took to the ice, where the #3 pick in the draft, Erik Gudbranson, was the main attraction, and he didn't disappoint either. He didn't do anything remarkable, just oozed confidence and did everything well. But at a hockey practice, some guys always stand out, and I'll try to just mention some initial notes on a few guys who stood out to me.

First things first - based on the saves he made, Olivier Roy showed a great glove hand, and even made some fans ooh and others ahh, although it must be hard for a goalie to really impress in this type of practice.

The Reds - Zack Kassian is a big, big guy and showed some shooting zip. Ryan Johansen impressed with his speed and skating style. Taylor Beck, Charles-Olivier Roussel, and Tyler Toffoli all showed great shots. The most impressive kid during the Red practice was Nathan Beaulieu, one of only two or three draft eligible guys on the ice. He seemed to be fast - really fast - and added an offensive aspect to his night as well.

The Whites - Besides Gudbranson, who is a big kid, there were a couple of other huge defenders, not the least of which was Taylor Doherty who's listed at 6' 8". The kids that impressed me most did so mostly with their shots. Casey Cizikas, Kyle Clifford and Scott Glennie can all really shoot the puck, while Brendan Gallagher showed a lot of speed. Cody Eakin proved to have the best scoring touch, scoring a couple real beauties in the one on none drill against Roy.

It was a fun evening but very difficult to have a look at everybody. Nobody looked out of place and I'm sure more will catch my eye over the next few days. Hamilton was one of the guys who didn't stand out, but at least he's in good company.

Respectfully submitted by your "Columnist Abroad" who thanks you for this opportunity.