Earlier today I looked at some of the best and worst faceoff men in the league.  One of the things that jumped out from that analysis was that a lot of the worst seasons came from rookies, and all of the best seasons came from players with some experience.  After the jump, I'll take a look at faceoff percentage by age and take a look at how much players improve from one season to the next.

The first chart I'll look at is faceoff percentage by age.  I've also separated rookies from non-rookies, so that we can see how much experience is helping.  In order to qualify for inclusion on this chart, a player must have taken at least 400 EV FO's in a season.  In order to qualify as a rookie, the player must have played fewer than 10 NHL games prior to the season in question.  The chart includes all qualifying seasons from 2005-06 to 2009-10: 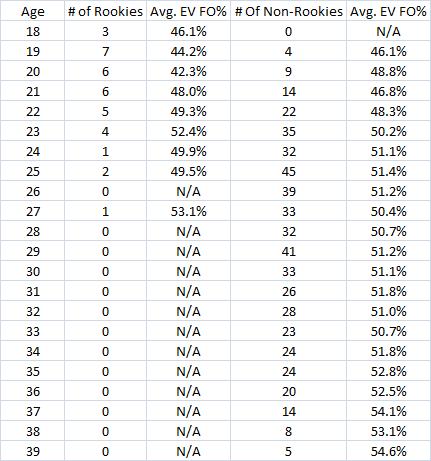 We can see by the chart that young players tend to struggle and that players in their rookie seasons struggle a bit more than others, at least until age 21.  By age 23 things seem to have stabilized into a range between 50% and 52% for the men taking the most draws, and it stays that way until age 35, when it looks like there may be some late improvement on the dot.  In both cases, it seems to be that survival bias will be a big factor.  The young players who continue to struggle will stop taking faceoffs.  Andrew Cogliano, for instance, is part of the age 20 and 21 samples, but not the age 22 sample, because the coaches stopped using him so often.  By the time the player is 23, it seems, he's either improved substantially, or he's not playing center anymore.  Survival bias also looks like a big factor at the end of a career.  Some of the players hanging on at the end there are probably hanging on, at least in part, because they've always been good on the draw.

So how much improvement is really there?  To help answer that question I looked specifically at the improvements from season to season.  In order to qualify for this sample, the player in question must have taken at least 400 EV FO's in both seasons.  So, for example, in the 21 to 22 sample, all of the players included took at least 400 EV FO's at both age 21 and again at age 22, at which point the two seasons were compared.  I've also included an "absolute difference" column, which just means how much the faceoff percentage changed, on average, from one season to the next, whether the change was positive or negative.  So, for instance, if two players had seen changes of +3.5% and -3.5% respectively, the average improvement would be 0.0% and the average absolute difference would be 3.5%.  I should also mention that an improvement of 1.5% would be something like going from 50.0% to 51.5%.  I realize that this terminology might be confusing, but I wasn't sure what else to use.  So yeah, keep that in mind. 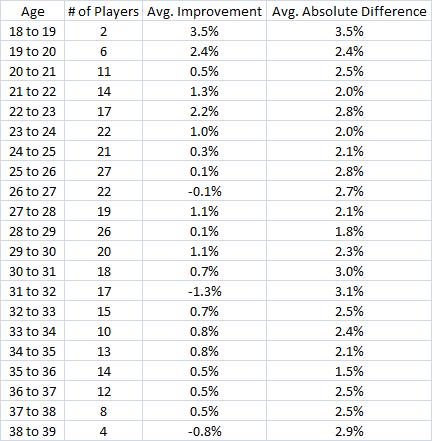 This chart is interesting because it starts in the way that I'd expect but then diverges significantly from those expectations.  I expected to see a lot of improvement in the first few years, and that's exactly what we see.  From age 18 to age 24, it looks like real improvements are being made.  Then the improvement stops and, although some players have good years, and others have bad years, as a group, they stay about the same.  This is also expected.  But I thought that it would stay that way right to the end, and that's not what happens.  Although the players are getting better at a much slower rate, the group seems to get a little bit better almost every year.  Out of the 21 comparisons, the group only regresses three times.  In every other year, the group, on average, does a little bit better.  I'm not sure what to make of that.  Maybe it's the case that the players are just getting better and better at this skill with the odd outlier season thrown in.

The other nifty thing is looking at the average absolute difference.  Even if the group itself is improving slowly, the individual players are quite erratic.  The average player will see his EV FO% move 1.5% to 3.0% from one year to the next.  A lot of that variation is probably just luck, and that makes it hard to know if a player is really improving.  Sidney Crosby, for instance, went from 49.9% on faceoffs in 2008-09 to 54.6% in 2009-10.  How much of that 4.7% improvement (remember the funky terminology... any suggestions?) is real, and how much is just luck?  The numbers above make it very difficult to choose with confidence one way or the other.