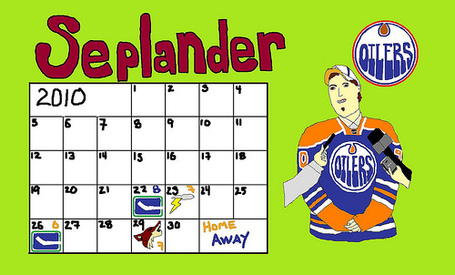 Well hello! It seems that you've either found your way back here for your second ever weekend update, or this is your first visit because you missed last week. Either way, I'm glad you're here. In case you didn't know, I try to be creative sometimes. That is why I have taken to making the above Oilers' MS Paint calendars. Next month is Seplander. If you go to my Flikr account you can download your own copy. Next, with any luck I'll fill you in on something you may have missed, or introduce you to a new blog that you may learn to love. Let's get started shall we?

In case you missed it, Nikolai Khabibulin was in court yesterday, Friday August 27th. Copper and Blue was among the very first to bring you the news that a guilty verdict had been reached. What's next? Well as of right now, sentencing is to occur on August 31st. According to everything I've read, Khabibulin will be serving at least 30 days, and not in a fun place. Speculation continues as to whether or not the Oilers will be able to break their contract with the Bulin wall. Everyone seems to have an opinion on this, and I can see reasons for both sides of the argument. At this point, I find it hard to see the Oilers cutting ties with Khabibulin. However, there is still the issue of Khabibulin's back. I have yet to find any report saying that he has been giving a clean bill of health.

Steve Tambellini spoke with the Oilers' Bob Stauffer on Oilers Lunch. During the interview Tambellini discussed personel, leadership, and the fact that he believes we have too many players. You can turn to Copper and Blue later this afternoon for some quotes and my thoughts on this interview.

The last order of Oilers' "news" for the week: Sheldon Souray is still a member of the team.

Looking to the NHL, Ilya Kovalchuk may have a new contract, and in the NHL no less! Despite some reports that Kovalchuk was considering the KHL, there were other reports that New Jersey had been meeting with the NHL hoping to strike a deal. Honestly, I'm really really really tired of this story. How do we even assign monetary value to players these days? Kovalchuk hasn't won a Stanley Cup, hasn't had a full season with the New Jersey Devils, and the truth is, some teams only just now seem to be realizing what it means to live in a cap era. Does Kovalchuk's leadership, skill, and on ice performance justify the numbers we've been reading? At this point, I truly don't think so. However, what something is worth, and what someone is willing to pay for it are two completely different things. With any luck this may be the second last time I report on Kovalchuk's contract. Stay tuned!

In other news, the 2010 hockey summit wrapped up. What came from that? Well some talk, and some more talk. Ultimately, Rene Fasel does not want European NHL Expansion and really, can you blame him? I like that there is European hockey and the NHL in North America. Do I think that a European Conference might make some money? Maybe, but it also sounds like it will add to costs for travel, fatigue to players and annoyance to fans. You think you have it bad now trying to race to catch a game without hearing the score on the radio or from a friend? Just imagine this time shift! Anyways, I do see Fasel's point of view, and prefer to see international hockey competitions during my beloved Spengler Cup or any IIHF tournament really. I don't think that this idea is really worth getting too worked up over; sometimes ideas seem to surface purely for the sensationalism.

Lastly, the NHLPA is expected to announce a new executive director, but the deal isn't done yet. Donald Fehr has ties to the MLB players union, and is said to be the front-runner. Sadly, even with a new director, the only thing I see changing is the face that the blame finger points to. We believe in change, at times we hope for change, but we know better than to expect changes, or at least timely changes.

Now in case you missed them, here are some of my blog selections of the week for you:

We all Squeezed the Stick - Black Dog Hates Skunks

The Young Stars Tournament, is it Important to the Oilers? - Oilers Jambalaya

The Shackles of the Press - Copper & Blue

How the Oilers almost traded Sheldon Souray for Scott Hartnell, according to TV sportscaster - Cult of Hockey

To add to the "in case you missed it list", Copper & Blue is looking to bring together our readers for a free online NHL 10 tournament. Please sign up if you're interested.

In and around Edmonton this weekend, well... in case you've been trying to forget (or you're too ashamed to admit it right now), Edmonton does have a CFL team. No, they are not doing too well so far, but they are home this weekend and hosting what always seems to be no less than the entire Rider Nation. That's right, the Roughriders are in town for a 5pm start Saturday August 28th at Commonwealth.

If a movie is more what you had in mind, Toy Story 3 and Despicable Me are on their way out of the theatres and are worth seeing, even if you're waiting for the DVD release. I just heard that Avatar will be returning to theatres for limited engagements. I'm sorry, but I can't believe I was talked into sitting through the whole thing the first time. This girl will not be able to tell you anything about new scenes next week. If you are looking for an action flick, I may just be sitting next to you at The Expendables. How can this movie not be amazing right? Every single action star I can name, one script. Alright.

Thanks so much for reading this week and make sure to check in this time next week for your wrap up of the week's events and maybe something you just didn't see coming.