Before the 2010 draft, the Oilers created Oil Spill, a movie that went "behind the scenes" during the Oilers' preparation for their first-ever (note: not really first-ever) first overall pick.  The movie focused on the Hall v. Seguin debate, but had a lot of Kevin Lowe talking about prospects, had some brief interviews with a couple of other Oiler prospects, and showed Oiler scouts discussing various players (although names usually weren't mentioned).  A lot of people probably found it boring, but I liked it.  I liked getting to see a little bit more of the process, I liked hearing the arguments scouts would use to push their guy, and I liked some of the little nuggets of information that the film provided.  I enjoy draft evaluation, but it can be hard.  Probably the biggest problem is sample size.  Each team usually makes less than ten selections in any draft, so it's hard to know when a team is good at the draft and when they're lucky.  So imagine my surprise when one of the golden nuggets from the movie was the Edmonton Oilers' 1979 draft list.  Kevin Lowe brings it out at the end of the movie and shows it to Taylor Hall and Darryl Katz.  It's a brief look, but if someone decided to pause the movie a few times....  After the jump, let's take a look at most of the top fifty names on the 1979 list.

The 1979 draft saw 103 of the 126 players drafted play at least one game in the NHL, and 67 of those players played in at least 200 regular season games, including every single one that was chosen in the first round.  17 players made it all the way to 1,000.  It was a unique group of players, probably the most talented class ever, and it could have been ever better had the Oilers not been allowed to protect Wayne Gretzky from being included.  1979 was the first draft after the the NHL/WHA merger.  This raised all kinds of issues, because at the time, the WHA had several players in the league who would normally not have been eligible for the draft.  In 1978, players needed to be born in January 1 1959 or earlier in order to be eligible, which meant that most players drafted were 19 or 20.  Would the NHL try to keep this rule and make a few exceptions for players like Rob Ramage and Mike Gartner who were coming over from the WHA?  It was a complicated question, and the league decided to take its time, which is why the draft was held in August instead of June.  In the end, the NHL decided that they would move the age of eligibility back from "19-20" to "17-18" over a two-year period, which meant that the 1979 and 1980 drafts were both two drafts in one!  In order to be eligible in 1979, the player needed to be born January 1, 1961 or earlier or they must have played the 1978-79 season in the WHA (this last point wasn't communicated so well).

The Oilers' draft list reflects these special circumstances.  On the left side of the list, some of the players had asterisks beside their names.  It became clear early on that any player without an asterisk was born in 1959 and any player with an asterisk was born in 1960.  They also had a couple of players with circled numbers, which are the players the Oilers actually selected.  The little red lines on the left side indicate the "round" breaks on the Oilers' list (although they seem to be confused as to the whereabouts of the end of the second round).  The last mark on the left side is a couple of question marks, and I'm not too sure what those mean.  On the right side, there's a bunch of information that you couldn't see well for most of the list on the movie including handedness, position, height, and weight.  I've just left all of that stuff off of the transcription.  There were also certain players with check-marks beside their names.  I did include those, but I haven't a clue as to their meaning at this point.

Without further ado, here's the Oilers' draft list (left side) and the actual order of selection along with the difference between the two (right side):

As for the Oilers, let's take a brief look at the players they actually selected.  When it came time for their first pick in the draft, Kevin Lowe was the top guy on their list, and that's the guy they selected.  I don't know if they told anyone that they "didn't think he would be available" when it came time for them to pick 21st overall (the Oilers were given the last pick in the draft as part of the "package" for retaining Gretzky), but there were a bunch of crazy teams like the Bruins who were way over-valuing marginal talents like Ray Bourque!

The Oilers actually traded their next two selections to the Minnesota North Stars (#42 and #63) for Dave Semenko and Minnesota's third round pick (#48).  I kind of wonder whether or not that trade was contingent on Dale Hunter being unavailable (he was chosen 41st overall by the Nordiques).  It's just speculation, but might explain why the Oilers have a question mark beside Hunter's name.  At any rate, the Oilers' second choice was Mark Messier, who was 29A on the Oilers' list.  Messier didn't meet the age requirement for this draft, but was eligible because he had played in the WHA in 1978-79.  It looks to me like the Oilers weren't so sure about his eligibility, which is why he isn't in the "regular" order.  Even still, Messier wasn't the highest-ranked guy on their list.  Tomas Eriksson was ranked 24th, and yet the Oilers still decided to go with Messier.  Good choice.

The Oilers didn't pick again until the fourth round when they selected Glenn Anderson (although it was spelled "Glen" on the list) with Eriksson still on the table.  Anderson is the other player with a question mark on that list.  The Oilers acquired this pick from the North Stars in exchange for expansion draft considerations in June.  Could there have been another trade in the works if Anderson hadn't been available, or do those question marks mean something else?   Either way, It seems that the Oilers were thrilled when Anderson fell so far in the draft, and perhaps a bit lucky that Steve Peters was taken off the table five selections earlier.  One of the greatest drafts in history would still have been great with Peters instead of Anderson, but it certainly would have been diminished.

The Oilers' next selection was 84th overall, and they took Max Kostovich who isn't on the list at all.  Maybe he's one of those players I couldn't see between 31 and 33, though if that were the case, you'd think they would have taken him with their last pick.  Interestingly, Tomas Eriksson was still available here.  How do you have a guy ranked 24th in the draft available to you at #84 and not pick him?  The Oilers must have felt that the Swede was going to be available right into the sixth round since teams generally didn't draft players out of Europe at this team.  As for Kostovich, he was one of the 23 players drafted who didn't play a game in the NHL (even the best drafts have their misses).

By the time the Oilers were up again in the fifth round, Eriksson was gone, but the Oilers were able to take Mike Toal who was a teammate of Kostovich with the Portland Winterhawks of the WHL.  It was a stacked team that included Perry Turnbull and Keith Brown, two guys who were chosen in the top ten, as well as a young Dave Babych.  In total, there were seven Winterhawks drafted in 1979 (and Babych was taken 2nd overall in 1980), but their leading scorer was Mike Toal.  The Oilers probably felt like they got a steal, but Toal played in only three NHL games and a couple of seasons in the minors before retiring.  In fact, most of the guys chosen from that team could be considered disappointments.  Perry Turnbull didn't bring the kind of offense you'd expect from the second overall pick (351 points in 608 games).  Keith Brown had a nice career, but when the defender drafted immediately behind you is Ray Bourque, and five of the next six defensemen chosen played more games, it's hard to say that was the right pick.  Blake Wesley ended up playing in almost 300 games, but that isn't all that impressive in this class, especially for a guy taken 22nd overall (only two guys drafted ahead of him played in fewer games).  Of the other four, only Tim Tookey made it to 100 games, and he didn't make it by much. The Oilers' final selection (and the final selection as well) was Blair Barnes who didn't make either the list above or an impact in the NHL.  Barnes ended up playing in one game for the Los Angeles Kings, but was retired by 1985.

Another tool that may help in our evaluation of the draft is a separate draft list, but I couldn't really find one.  What I could find was a website that often included where a player was ranked in The Hockey News Draft Preview as a part of his profile (there's also a great historical review on the 1979 draft on the same site , which I found very interesting and helpful for this article).  Using those profiles, I was able to reconstruct a reasonable portion of that list (although The Hockey News ranked players born in 1959 and players born in 1960 separately): 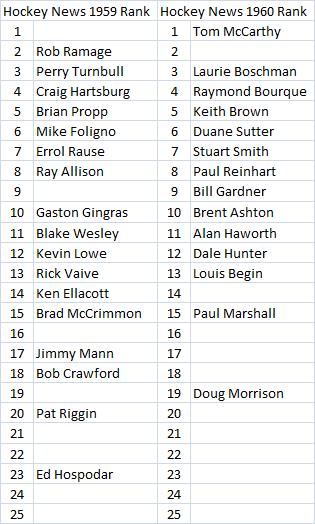 I think it's very likely that Mike Gartner belongs in the #1 spot for 1959 and that Michel Goulet should be at #2 in 1960, but after that I've really got no idea.  If anyone actually has this information (or the CSS list from 1979), that would be very helpful for comparison.  But even with this limited information we can learn a bit about the players the Oilers liked and disliked, at relative to another close-to-comprehensive list.  The players the Oilers had quite a bit lower were Mike Gartner, Ray Bourque, Brian Propp, Brad McCrimmon, Bill Gardner, Stuart Smith, Alan Haworth, and Bob Crawford.  The guys they had quite a bit higher were Rick Vaive, Kevin Lowe, Keith Brown, Ed Hospodar, Brent Ashton, and Doug Morrison.  At least for me, that first list is definitely the better one.  They may have had guys like Messier and Anderson much higher than The Hockey News too, but it's hard to tell, since they're not on this reconstructed list.  It's also possible that the Oilers' scouts were never very good, but were extremely lucky in 1979 and 1980.  I know which way the rest of Barry Fraser's scouting record has me leaning.