Share All sharing options for: Copper and Blue Oilers' Weekend Update With Lisa 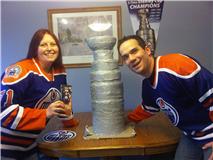 Welcome to your first edition of Oilers' Weekend Update. In this feature you can expect a summary of Oilers' news from the past week, some of my thoughts on the news, suggested reading, and something you likely weren't expecting. Eventually I think more of my personality and quirkiness will shine through, and I hope we'll all be friends. One thing that always helps: I bake! Check out what I made for my most recent birthday/playoff party. Yes, those are 2010 Edmonton Oilers' playoff tickets, a most thoughtful gift.

So what happened this week? Moves. Fernando Pisani is no longer an Oiler. This fan favourite (maybe not when you take into consideration his contract) and hometown boy who had some health issues signed a one-way deal with the Chicago Blackhawks worth $500,000 for a single year. Personally, I wish Fernando well and hope that he will be able to find his game and health once again. In other "moves", Sheldon Souray is still an Oiler, and Mike Comrie still isn't. Will the Oilers sign Comrie? Who knows at this point, but keep in mind that last year it was September 9th when I first started wailing and asking for a hug due to the return of Comrie. I'm neutral on the potential return of Comrie this year. Souray? Hopefully everyone will be able to pretend like the ordeal didn't happen, unless of course the recent rumour of Souray for Tomas Fleischmann of the Washington Capitals comes to fruition. I know that most are hoping a trade will happen, mostly for the sake of the kids in the dressing room. You can read more on this trade speculation over at the Cult of hockey.

We don't know for sure about any changes, but according to Jim Matheson of the Edmonton Journal, Eklund (NO! not that one!) is under consideration for the position left vacant by Kent Nilsson. Pelle Eklund is a former Philadelphia Flyers forward and has been scouting in Sweden for the last several years for the Montreal Canadiens before being let go this summer. I felt that Kent's resignation spoke a lot to the relationship between father and son; I'd like to think that Kent left the organization to make things easier for his son Robert Nilsson to move on with his own hockey career. I loved the piece that our own Bruce McCurdy wrote about Kent's playing career shortly after the Oilers bought out Robert. It seems like the apple did not fall all that far from the tree.

The search must be continuing for the next voice of our Edmonton Oilers as no announcements have been made. The team still has time to keep looking, and in the meantime, some fairly prestigious names have been thrown around.

Of course, if you like a little Hollywood with your sporting news, there is the news of the Comrie-Duff wedding. Reportedly, Comrie had Duff sign a prenup. Also, pictures!

Since this is August, that's about it for Oilers' news this week. So let's also take a quick look around the league. Kovalchuk is still an unrestricted free agent, and nothing has come out from the further investigation of the Pronger, Luongo, Savard, Hossa, and other contracts. For a little fun on this subject you can check out my favourite comical blog, Down Goes Brown.

In other NHL news, Tomas Kaberle is still a Leaf. Yes the world stood still for a day as we waited with baited breath to see if Kaberle would be moved before his no trade clause came into effect. Wait, you weren't glued to your TVs waiting to see what would happen? Perhaps this was an attempt to bring more attention to the NHL and help obtain that elusive US television deal. More likely, it wasn't. It was just Brian Burke trying to do something "for the good of the game". Down Goes Brown is a Leafs page, so of course they had something to say on this one.

Lastly, in terms of NHL news there is more talk of rule changes. The biggest one for me is the potential change of the overtime and shootouts. Some GMs feel that there is too much emphasis on the shootout. Being an Oilers' fan, of course I say the shootouts are okay, since in the past, the Oilers have done fairly well with them. As a hockey fan, I wouldn't mind if there was a slight change made to this policy. I wonder if extending the overtime period from five minutes to ten might help. Sadly my opinions mean even less to the world of the NHL than they do to my friends, so we get to contemplate what the GMs and NHL are saying. This brings us to my poll, I would like to know what you think of the proposed NHL rule changes. Please feel free to use the comment section to discuss what you think too, even if you want to bring up the trapezoid rule which hasn't been mentioned. I think I would be okay with getting rid of the "trap" but, thats a topic for another day. The National Post had an interesting article on the proposed changes.

For your reading pleasure I would suggest the following blog entries from this week that were among my favourites:

Cogliano, at least, wants to be an Edmonton Oiler - Cult of Hockey

There are plenty more quality blog entries out there for the past week, and I do apologize that the list is shorter this week. In the coming weeks you can expect more selections from me, but in the mean time I encourage you to look back through postings here on Copper and Blue, Oilers Nation, the Cult of Hockey and Puck Daddy as they are my favourite sources. Please also feel free to comment with your opinions or suggestions.

If you are looking for something to do around Edmonton this weekend, keep in mind that this is the final weekend of the Fringe Festival. Otherwise, if you haven't seen Inception, go check it out. It didn't blow my mind, but it was a pretty good movie even if it was pretty long (say no to the large pop, stick with the regular).

Now here is your unexpected suggestion for the weekend, do you like peanut sauce? I would like to introduce you to my favourite bottled peanut sauce. Full of flavour, a nice kick to it, this sauce is fantastic as a dipping sauce, a stir fry addition or whatever you would like to add it to. I love to use it when I make my own salad rolls, even if they are a lot of work! 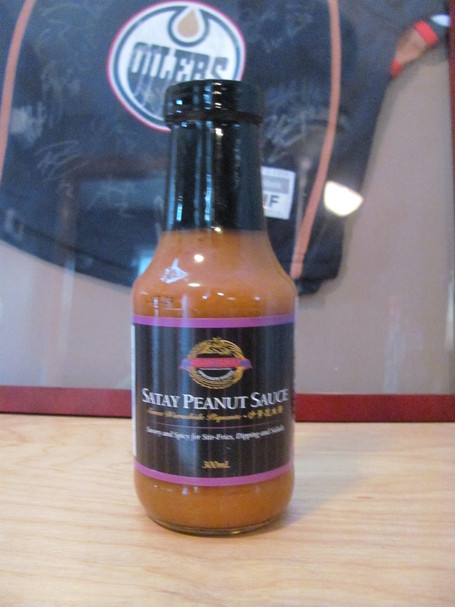 (photo courtesy of me, Lisa McRitchie)