In my article on Junior-aged players and entry-level contracts, I used a scatter plot to show Corsi against qualcomp.  That plot contained an unintentional view of Sam Gagner's career progression and it spoke volumes about Gagner as a player.  Because of that, I decided to study the same statistics for the ten forwards that have played for the Oilers each of the last three years.  I gathered all of the numbers from Desjardins' Behind The Net, and placed all thirty points on a scatter plot.  The results may give us a window into Tom Renney's brain as training camp begins.

Lowetide did an excellent workup on Renney and his coaching style months before he was hired as an assistant coach last season.  He revisited the box after Renney was hired and not only found that Schrödinger's cat was still alive, he also found this:

How did he handle his top 6F in NYC? Played the hell out of them. In 05-06, Jagr (who loves Renney) played 22 minutes a night, including 6 on the PP. Other forwards who were above 4.5 minutes per night with the man advantage were Michael Nylander, Martin Straka and Martin Rucinsky. Looking at the TOI totals for that season it is very easy to see how he handled the forwards. Top line (Nylander-Straka-Jagr) 19 or more minutes; 2nd line (Rucchin-Rucinsky-Sykora) 15+ minutes; 3rd line (Moore-Prucha-Ward-Nieminen) 11 or more; 4th line (Betts-Hossa-Ortmeyer) about the same as the 3line.  The PK men (Rucchin, Moore, Betts, Ortmeyer, Ward) were exactly the men who weren't on the PP. I suspect we'll have something similar here, a distinct skill 6 plus powerplay and a flat 6 for checking and the penalty-kill.

Will the scatter plot give us an idea of the top six forwards in Edmonton this season?

The plot below shows Qualcomp on the vertical axis and Corsi on the horizontal axis.  The qualcomp metric that I'm using in this chart is Corsi Quality of Competition by www.behindthenet.ca The qualcomp figure is normalized for a twelve forward grouping.  Those in the top right portion of the plot were on the ice against players that outshot their competition, but those OIlers carried the play.  Those in the top left were out against outshooters but were buried.  The bottom left shows players that were outshot by weak competition and the bottom right shows players that outshot weak competition.

(Click on the chart to see a larger version) 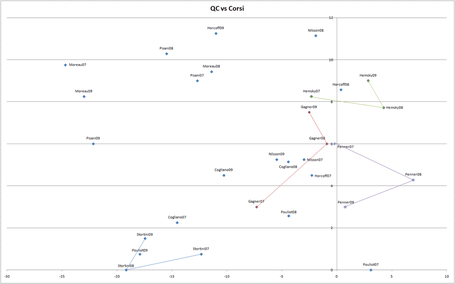 This actually looks like a chart that our resident astronomer should have posted, but it shows a few interesting points, nonetheless.  Sam Gagner's progression is obvious here.  He's qualcomp is increasing each year and his raw Corsi numbers aren't suffering.  Dustin Penner and Ales Hemsky are the only fellows pushing the play.  I've created a Taurus-like constellation for Zack Stortini in the corner to show that the fourth liner's been under water.

One notable point - and I've made it before - why was Robert Nilsson kicked to the curb again?

However, the Oilers have been a terrible team recently, and the raw numbers would reflect that.  If we delve into the relative Corsi (Corsi for a given player MINUS Corsi of his team when he’s on the bench) numbers and compare the plot, we can see how important the player is to the team.

(Click on the chart to see a larger version) 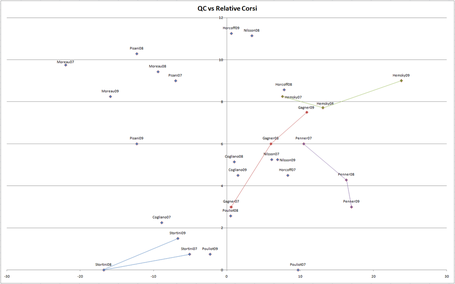 In this plot, Gagner's progression is even more pronounced, and Penner and Hemsky's work more obvious.  Stortini is still Taurus the bull in the bottom left corner and Ethan Moreau and Fernando Pisani still have a monopoly on "run over by tough minutes" in the top left.

This plot also brings Shawn Horcoff's role to focus.  We know that Horcoff was held back because he was made to tow J.F. Snowplow around the ice.  Remember this paragraph?

J.F. Jacques is outshot 2-1 without Horcoff.  When paired together, Horcoff is able to stop some of the bleeding as they are outshot 4-3.  Without Jacques, Horcoff is actually outshooting this year at 169-154.

Horcoff, as long as he's not saddled with Jacques, should have a bounceback year, even against the tough minutes.

I should also bring up Andrew Cogliano.  In both plots, his points seem to meander around the screen, like a rudderless ship.  It's an apt description for the young man's career to this point.  I said it last season - that the team need to move him to the wing and let him sink or swim - and I'll say it one more time this season.

So Penner, Gagner and Hemsky are the only guys on the team constantly pushing play up the ice, and at the same time moving their plots to the right of the graph.  Given their success as a line last season, it seems that these three may make a formidable first line.  The problem for Renney is that there aren't any other players on this team, other than Shawn Horcoff, who have any history of success against any minutes, let along tough minutes.  If Shawn Horcoff is going to take the tough faceoffs and the tough matches, he's going to need a couple of forwards that can, at the very least, tread water.  Ryan Jones and Gilbert Brule are candidates, but neither have ever faced tough competition.  Tom Renney has his work cut out for him - someone might want to throw some aspirin in that box.