It's important to remember that the language we use tends to hide certain aspects of reality and highlight others. The first time I came across this idea was in a book about metaphor by George Lakoff and Mark Johnson; it's about thirty years old now, so it's not exactly on the cutting edge of linguistic analysis, but it's very readable, even if you don't have a background in linguistics, so I'd certainly recommend it for someone who's interested but doesn't know where to start. Anyroad, I bring that up here because I'd like to take a closer look at what we're hiding and highlighting in one of the basic categories we often use to describe hockey teams. It seems like hockey people have been using "Top Six Forward" since I first started watching hockey. After the jump, I'll take a brief look at whether or not that makes sense.

The first thing I'd like to note is that each team is different and that teams aren't static. Most teams don't have a dedicated checking line, but a few of them do. Every team deals with in-season trades, and injuries, which can change the role of certain players in the middle of the year. Not every team has a four-minute per game goon, but some of them do. So when I'm looking at whether or not a "Top Six Forward" is the kind of thing that makes sense, I'm speaking generally.

So how to measure? Well, I looked at even-strength ice time across all thirty teams in an effort to see whether the idea of "Top Six" and "Bottom Six" made sense. I ranked all of the players who played in at least forty games by even-strength ice time and put the players into groups (1-3F, 4-6F, 7-9F, 10-15F) using the information from Behind The Net. I then took the average ice time of the players in each group and compared. Trades were an obstacle in this exercise in that players were counted based on the team they finished with, so Ilya Kovalchuk counted as a Devil, Olli Jokinen as a Ranger, Matt Stajan as a Flame, and so on. The result is that the Toronto data just doesn't work (they only had nine guys qualify, and one of them was Colton Orr) and that some of the other teams are a bit wonky, but overall, here's how things shook out: 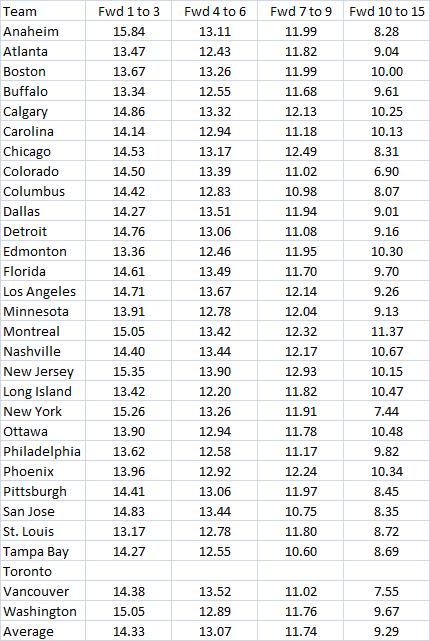 I decided to include all of the individual team data, because it reminds us that each team is different. A team like Pittsburgh is probably best thought of as having a "Top Three," "Middle Six," and "Bottom Three" (although in their case it's five guys). Or at least, they would be except that their top three forwards by ice time - Sidney Crosby, Evegeni Malkin, and Jordan Staal - often played on three different lines. Even Washington, who looks like they have a top line way out in front, actually have both Alex Ovechkin and Alexander Semin in that group, two guys who spent a lot of time playing apart. Another team with a strong "3,6,3" feel is the Chicago Blackhawks who gave lots of EV ice time Jonathan Toews, Patick Kane, and Marian Hossa, and almost none to the bottom of their roster. For other teams, the "6-6" set-up makes sense. The San Jose Sharks, for example, have a huge gap between the 4-6 group and the 7-9 group. In their case, the big fall actually takes place after seven guys (Manny Malhotra is the seventh man), so it would likely have been appropriate to talk about their "top seven" a year ago. The Lightning are another team that had six guys clearly getting more ice time than the rest.

There's a clear gap between each group in the chart, but on average, the gap between 1-3 and 4-6 is very close to the gap between 4-6 and 7-9. By far the biggest gap is between forwards 7-9 and the guys at the bottom of the roster. It seems silly, then, to group these players together. It would make much more sense to talk about a team's "Top Nine," especially since that extra ice time over the bottom group usually comes in high-leverage situations (teams will often start to run three lines as games move into the third period). Exactly what that top nine looks like (is there a checking line? is it PvP?) may be different, but teams do usually have at least nine players who take a regular shift for all three periods night after night. I bring this up because in recent discussions I've heard that the team "doesn't have room for Cogliano in the top six," or that "Paajarvi is better off in the minors than in the bottom six." Honestly, it seems to me like "top nine" and "on the fourth line" are much better groupings in each case. And if that's true, maybe there is room for Cogliano and Paajarvi after all.