In my last article, I looked at the average performance of 18-20 year-olds by way of Corsi and even strength goals for and goals against.  The comments and e-mail feedback I received on the article contained a number of interesting questions and requests for additional data.

This post continues in that vein and after the jump I fulfill all of the requests made of me from that article.

Here is the original table constructed for the prior article.  These values are all averages by age group and I used player age rather than player eligibility to classify these players.

Scott asked me if I could redo this table using the median values rather than the averages because he was concerned that Ryan O'Reilly's horrendous raw Corsi was skewing the results for the 18-year-old group.  Below is the table reworked with median values:

O'Reilly's raw Corsi was skewing the results, but the medians dragged the GFON/60 down and the GAON/60 up.  The goal differential gets much worse, from -0.29 to -0.52. Remember, even though O'Reilly spent the entire year in his own end, Craig Anderson kept the Avalanche in game after game.

The next request was to strip away Sidney Crosby from the 20-year-olds to see what impact he had on the group as a whole.  The e-mailer wanted to know if Crosby alone was enough to drag the whole group into the black.  The original table values with all thirty players are the first row, the twenty-year-olds minus Crosby are in the second row.

Even though he was only one of thirty data points, his impact on Corsi and GFON/60 for the group was significant, but not enough to put the rest of the group into the red.

Next up was a request for data labels on the scatter plot showing Corsi plotted against qualcomp percentage.  I also had a request to color code the scatter plot by age group.    You can find both of those requests fulfilled below, click the plot to enlarge in your browser: 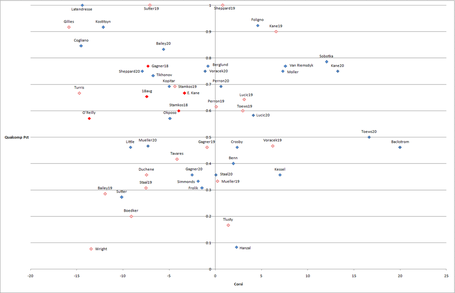 The final request was from Bruce, and he wondered about the differences in numbers between the kids forced into bad organizations or rebuilds versus the kids that have played for stable teams when he asked:

I also wonder if the underagers as a group will be punished somewhat by factors beyond their control, e.g. they wouldn’t have made their teams as underagers if their teams weren’t shitty to begin with. The high draft picks especially so, as they are joining lottery teams and will be more likely to be thrust into roles beyond their capabilities. Their results are bound to be poor, even as they may be the best options for their rebuilding teams.

I've broken that out below:

The key, in my estimation, is qualcomp.  In both age groups, the players from non-playoff teams are playing second-tough minutes with second-tough qualteam, while kids on playoff teams played third-level minutes.  Bruce's inkling was correct - the players are forced into roles that they are not prepared for, or not capable of handling.

...the numbers are still a shade small, but this is a great argument for not burning years of service and entry level contracts on 18 and 19 yr olds.

There is a way to get productivity out of players in their first three years of eligibility, likely even on bad teams -- feed the young prospects soft minutes.  However, the question becomes one of asset management.  Is it worth burning through three years of a high-end prospect's contract if they're only effective against third and fourth line minutes?  Signing cheap free agents capable of beating third-level minutes and allowing a prospect time to develop away from the NHL, while not burning through contracts is a more prudent option.