Whenever a player is drafted first overall, he brings a tremendous amount of excitement with him. The fans of the team that drafted him have almost always suffered through a deplorable season, and are in need of hope. That the player is almost always quality in the long run helps to justify that hope. My hope is that this article provides Oiler fans with confidence to be joyful in hope, patient in affliction, and faithful in prayer. Well, maybe not that last one, but you get the idea. In order to do that, I'm going to take a look at a couple of players that I think make good comparables for the Oilers' primary source of new hope, Taylor Hall. In order for it to work, you can't expect one of those comparables to be Sidney Crosby. Agreed? Good.

When I went searching for comparables, I knew it wouldn't be an easy task. By their nature, first overall picks are somewhat unique talents, so we shouldn't expect barrels of players who look similar. That said, I think there's real value in using systematic criteria to come up with a preliminary list of names. The first of those criteria was to limit the number of years I looked at. It's my view that the whole point of looking at comparables is to see what similar players are doing or have done at a much more advanced stage of development. Thus, when looking for comparables for Taylor Hall I looked only at players drafted in 2006 or earlier. Even if a guy like John Tavares met the rest of the criteria (he doesn't), it's not all that instructive to look at Hall as following the same path as Tavares since neither guy is very far along in his development. The other side of the equation is how much the game has changed in the last couple of decades, especially at the NHL level. Picking a comparable from 1951 or 1972 can be instructive, but I prefer to look at players who've come into the league more recently if it's possible. As such, I limited my original search to players drafted in 1992 or later, which gave me a solid fifteen year range.

The second of my criteria was the league the players played in when drafted, the slot in which they were drafted, and their production in their draft seasons. I only looked at forwards who were chosen in the top five picks and who played their draft year in the CHL. This guarantees that the comparables will have been in a similar situation from a young age, which I think helps the comparison. Further, the player needed to be within 0.15 points per game and 0.10 goals per game of Taylor Hall in his draft year.

Using that criteria, only two players make the list:

If Taylor Hall had a career like either one of those guys, I wouldn't be the least bit disappointed, but these comparables aren't without their problems. Spezza played the first quarter of his draft year with the Mississauga Ice Dogs who won a grand total of three games that entire year. They didn't win three out of ten, or twenty, or thirty - they won three times in sixty-eight games, and scored a grand total of 157 goals in the process. Spezza was only there for his first fifteen games, but that's a pretty hefty chunk of his season in a pretty brutal situation. Further, Spezza was sent back to junior for 2001-02, played the majority of 2002-03 in the AHL, and spent the entire 2004-05 season in the AHL as well (go lockout!). The chance of Taylor Hall spending that much time playing hockey outside of the NHL over the next four years is incredibly remote. The two players would seem to be on different tracks.

The Marleau comparison presents a different set of problems. Although Hall looks a bit further along than Marleau in the chart above, that presentation is somewhat deceiving. For starters, although Marleau played in a higher scoring era, Hall actually played on the higher-scoring team; whereas Marleau recorded points on 40.8% of his team's goals, Hall scored points on only 33.5% of Windsor's goals. Further, Marleau was just over ten months younger than Hall in his draft year; whereas Hall was one of the older players to be drafted in 2010, Marleau was the youngest player drafted in 1997. Marleau's draft year was also only his second in the CHL, whereas 2009-10 was Hall's third. Marleau's draft year, then, might be a better comparison for Taylor Hall's 2008-09 season, rather than his 2009-10 season. And if that's the case, the comparison isn't quite as favourable:

The goal totals are still similar, but Marleau jumps ahead in terms of points and has a sizeable advantage in terms of how much his team relied on him for offense. In terms of style, I very much like the Marleau comparison. Both guys can play center or wing, both guys have tremendous speed, both are regarded as goalscorers despite less than off-the-charts goalscoring in junior, and the players are about the same size. Nonetheless, because Marleau was drafted at such a young age (the cut-off date on the dot), I do think this latter comparison is probably more fair, and that Hall is likely tracking slightly behind, rather than slightly ahead.

Even if the Marleau comparable looks pretty good, perhaps we should expand the criteria somewhat to see if we can't find someone to add to the group. If we include players who are within 0.20 points per game and 0.10 goals per game of Taylor Hall in their respective draft years, three more potential comparables are added:

None of these new additions jump out as being similar players to Taylor Hall either statistically or stylistically. Thornton's best skills are his passing, vision, and size, which enable him to play a very different kind of game than Hall, and his offensive numbers are quite a bit better. Lecavalier's numbers in junior are better still, and like Thornton, he relies on his superior size to control the play, an advantage that Hall likely won't have at the NHL level. Legwand may be the most similar stylistically, but the numbers in his draft year are on the low side, and that discrepancy becomes even more pronounced when we look at his 1996-97 and 1998-99 junior seasons and see that his production in 1997-98 is an outlier on the high side. If Legwand can be regarded as a Hall comparable, he definitely belongs on the low end.

What happens if we allow for more seasons and draft positions in addition to the wider production? Say, forwards drafted in the top ten selections as far back as 1982 who played their draft seasons in the CHL and scored within 0.20 points per game and 0.10 goals per game of Taylor Hall in his draft year. An additional nine players are able to meet this criteria: 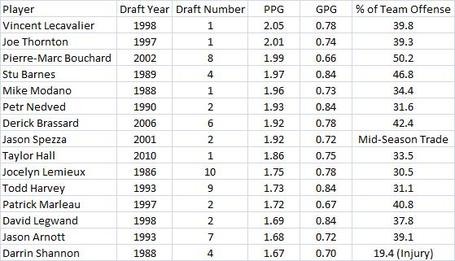 A lot of the players added to this list demonstrate the wisdom of the previous criteria. Darrin Shannon's rates came in an injury-shortened season, so we can throw him out for that alone. Pierre-Marc Bouchard, Stu Barnes, and Derick Brassard weren't selected higher because they're all somewhat undersized, something that won't be a concern for Taylor Hall going forward, which illustrates why draft position is an important component to the overall criteria. Jocelyn Lemieux and Todd Harvey are much closer to 10th than they are 1st, which implies that there were concerns about them that just aren't there with Hall. Lemieux in particular is being boosted by playing in a weak junior league (the QMJHL had some completely ridiculous offensive seasons in the 80's).

It's odd to see Hall mixed in with the guys from the early 90's and late 80's in terms of percentage of team offense. The Spitfires were a dominant team, and likely didn't need to rely on Hall as much as other junior teams do on their stars. Still, it's odd, and would be downright disconcerting if it weren't for the presence of Petr Nedved and Mike Modano. Of those two, I like Modano as a comparable better in terms of playing style. He's always used his speed to create plays and has often exhibited the "reckless" style that Hall has sometimes been criticized for in the last several months. There's obviously no guarantee that Hall will develop the kind of all-around game Modano used effectively (against the Oilers! Damn you Modano!) for so many seasons, but if he did, I would be very pleased indeed.

The last new addition, Jason Arnott, also seems like a decent if unspectacular comparable for Hall (let's just hope Edmonton fans don't treat them comparably). Arnott is quite a bit bigger than Hall, and his numbers are a tinge weaker, but he's not way out of the mix statistically and his major strengths - shooting, skating, physicality - are similar to Hall's. Overall, I think I'd go back to a list that's limited to top five selections, uses the narrower 0.15 point range on the top end, and takes the larger 0.20 point range on the bottom end to help account for Hall's age when he was drafted. I'd also like to throw in Jason Arnott since he jumped straight from junior to the NHL, is somewhat comparable statistically, is somewhat comparable stylistically, and is very familiar to Oiler fans. That leaves us with a list that includes Mike Modano as the "(almost) everything goes right" scenario, Patrick Marleau, Jason Spezza, Jason Arnott, Petr Nedved, David Legwand, and Stu Barnes in the "(almost) everything goes wrong" position. In terms of what to expect going for next season, three of those players went immediately to the NHL with Jason Arnott having the best offensive season (33-35-68 in 78 GP) and Petr Nedved having the worst (10-6-16 in 61 GP). It's very likely that Hall ends up somewhere in between alongside Patrick Marleau, the guy I think serves as the best comparable for Hall today.