The Edmonton Oilers will play a gaggle of youngsters this season.  Depending on the hot hands in training camp, there is a very good possibility that eighteen-year-old Taylor Hall, nineteen-year-old Magnus Paajarvi and twenty-year-old Jordan Eberle, will all start the 2010 season in Edmonton.  Twenty-three-year Linus Omark, has a shot at the team, and they'll all join grizzled veteran twenty-one-year-old Sam Gagner on one of the youngest rosters in the league.

Edmonton is abuzz with an underpinning of excitement as the most-talented collection of young players to wear Oiler silks since 1980 will assemble at Rexall Place in less than a month.  The optimism is justified - three top five talents plus the most famous Major Junior player in a decade - but are the expectations for this young group too much?

No other grouping of hockey writers harps on the ability to win battles, retrieve the puck, push the play and drive the puck up ice more than those new media authors writing about the Edmonton Oilers. As the topic of conversation has turned to the aforementioned kids, those writers have remained even-keeled.  Most fans have not.  After the jump, we'll look at the reasons for long-term optimism and short term understanding when it comes to this new Treehouse Gang.

Since 2007, fifty-three players aged twenty and under have played a season of more than forty games.  I've listed them below:

Four eighteen-year-olds have turned the trick, including one we're all very familiar with:

The number of twenty-year-olds is significantly larger as Major Junior careers come to an end and many European players come to the NHL after a couple of years of professional hockey in the homeland.  Thirty players fall into this category:

The progression of an NHL player is quickly noticeable in this table.  The results in each category improve over each year.  The players are asked to take on second and third minutes and generally struggle until age 20, when they finally see their Corsi, relative Corsi and goal differential move into the black.  But this list includes two and three-year veterans, and the Oilers have three kids that will be making their debut in the NHL, so I've compiled the same numbers for only rookies aged 18-20 since 2007.  There are only thirty-five players on this list:

The same pattern exists here as well, even though these players aren't improving because of NHL experience.  Both tables show the difficulties that even the most talented young players experience in their early years in the league.  Eberle, Svensson and Hall will experience those same difficulties, especially because the Oilers have only three players capable of carrying the play on their own and a fourth, Sam Gagner, ready to break out.  None of the three will be able to hitch a ride with a player proven capable of winning battles, retrieving the puck, pushing the play and driving the play up ice -- they'll have to do that on their own.

For those of you interested, I've created a scatter diagram of the the Corsi and qualcomp relationship.  The vertical access is qualcomp percentage, or his qualcomp rank ratio expressed as a percentage.  The lower the percentage, the more difficult the qualcomp.  Note that four of the fifty-three players played tough minutes prior to turning twenty-one.  The far right markers playing second-toughs are Nicklas Backstrom and Jonathan Toews as twenty-year-olds.  Backstrom is the high-water mark, having played with Alex Ovechkin against second-toughs.  Click on the graph to expand the view. 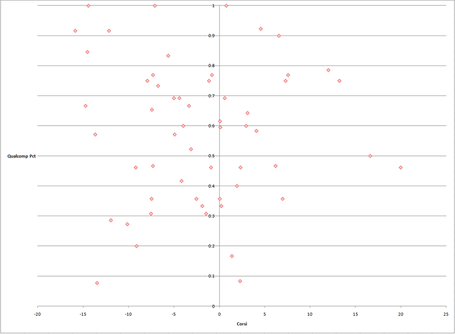