Share All sharing options for: 2007 Draft - Forwards and NHLE

Over the last few days, I've evaluated all of the forwards drafted in 2008, 2009, and  in 2010 using NHL equivalencies, a tool developed by Gabriel Desjardins to measure how much offense a given player would bring to the NHL based on how much he scored in a lower league.  By observing how much offense players have brought to the NHL from a given league in the past, we can estimate how much NHL offense we can expect from players currently playing in those lower leagues.  It's an imperfect assessment of player skill - we're just measuring offense after all - and I think it's generally a better measure for forwards than it is for defenders (or goalies!), but it's one indicator as to whether or not players will succeed, especially offensively, in the NHL.  Today I'll be looking at the forwards drafted in 2007, following up on a similar study that was done in January.  This will also be the last installment in this series for now - at some point, you need the "E" to come off of "NHLE" for these guys.

Before I go ahead and put up the chart a bit more explanation is needed.  Not all of the players drafted in 2007 were the same age.  In fact, several players had already passed through the draft at least once (and sometimes twice) before getting selected in 2007.  All of these older players are included in the chart but are marked in yellow.  Those who were drafted as overagers in 2008 or 2009 but were eligible in 2007 are also included with "N/A" written in the "Draft Number" column.  If 2007 was their first year of eligibility, the yellow highlighting disappears.  The "Draft Number" column itself is also not the player's actual draft position but the player's draft position among forwards.  So, for example, Sam Gagner was drafted by the Edmonton Oilers 6th overall but was the 4th forward to be drafted, so his "Draft Number" in the chart is "4".  The "team" column is for the team that drafted the player, rather than the player who holds his rights; more often than not it's the same club, but I felt like I should point that out.  Finally, the "Rank" column is the players organized according to their NHLE, which is based on the offense each player put up in his respective league during the 2009-10 season.  I broke the chart into four portions so it would be easier to read, but it's still quite small.  You can click on each quarter of the chart if you want to enlarge it. 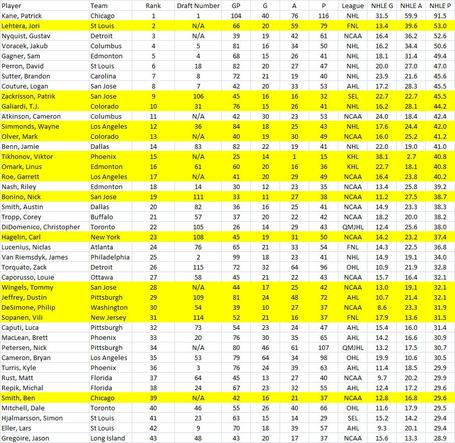 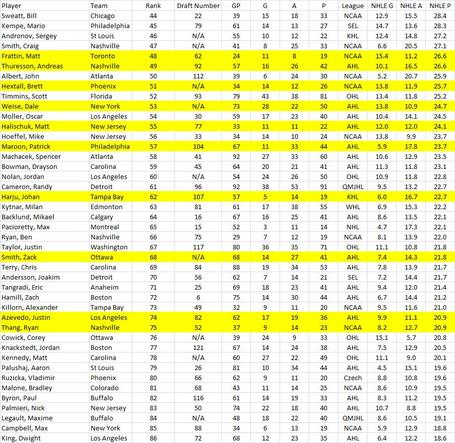 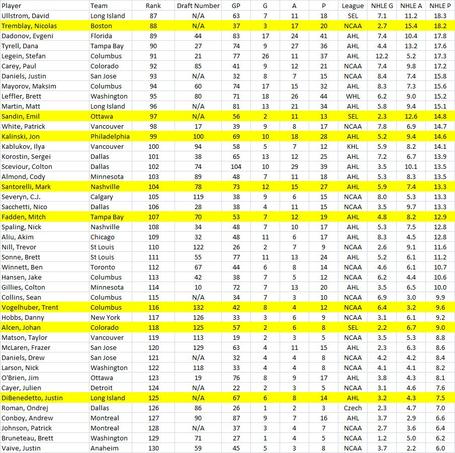 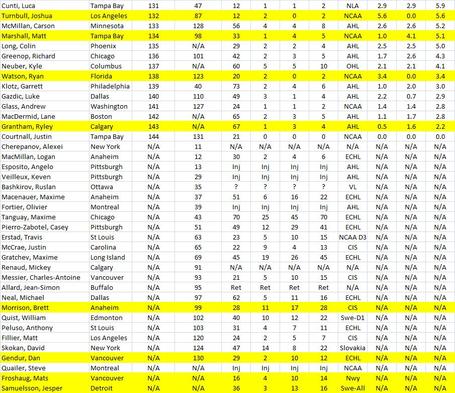 There are a whole lot of players on this list who aren't doing much, but I was able to find data on all of them except for one: Ruslan Bashkirov.  I did find out that he was playing in something called the Vysshaya Liga which is a lower-level Russian league (from what I gather, the Russians are turning it into something like their version of the AHL next year, complete with limits on the number of veterans who are allowed per team), but I wasn't able to find stats from it anywhere.  This is probably a bad sign for Ruslan Bashkirov, and may be one of the reasons he came to North America this summer to participate in the Senators' development camp.  So that's pretty much all you ever wanted to know and more about Ruslan Bashkirov.

As for players who have a real chance, we once again have one player simply dwarfing the other members of his draft class.  Patrick Kane played in favourable circumstances with the Blackhawks, and he excelled.  People talk now about what an "obvious" pick that was, but at the time there was very real debate about who might go first overall.  Kyle Turris was in the number one spot according to CSS and I distinctly recall the Oilers trying to move up in the draft to take him, not Patrick Kane.  The Hawks deserve some credit for making the right call there.  As for Turris, his progress to this point has been pretty disappointing.  His AHL numbers aren't disastrous, and he may well have a decent NHL career, but it doesn't look like he'll end up becoming a star player, and when you're taken third overall, that's the expectation.

But Turris isn't be the most disappointing forward selected.  At this point, that's a duel between Zach Hamill who was chosen by the Bruins 8th overall and Logan MacMillan who was chosen 19th overall by the Ducks.  Hamill had amazing results in his 2006-07, leading the entire WHL in scoring.  Size and speed, however, were both worries and Hamill hasn't been able to have success in the pro game.  2009-10 was his second year in the AHL, and while his offense improved substantially from 2008-09, it's still not good enough to suggest he can play in an offensive role in the NHL.  That combined with his lack of size make it very unlikely that he will ever become an NHL regular.  MacMillan's story is quite a bit different.  He never showed the offensive promise of Hamill, and statistically, he probably didn't deserve to be chosen in the first round at all.  In fact, CSS had him going in the second round that year, but TSN had him 23rd on their list so it's not like the pick was a total reach.  But if the expectations are lower than those for Hamill, the results are just so much worse.  Six points in thirty games is just plain bad; six points in thirty games in the ECHL is horrendous.  Add in a DUI arrest and I think MacMillan probably gets the "win".

On the other side of the equation, some players are really exceeding expectations.  One of those players is Gustav Nyquist who has had a pretty interesting career.  After playing in Sweden for several seasons (he's Swedish), Nyquist was drafted by the Red Wings in his second year of eligibility.  After being drafted he decided to come to North America immediately... to play in the NCAA.  And he's been fantastic in his two seasons with the University of Maine.  The only problem is that he's going back for a third.  At some point, a player doesn't have anything left to prove, and I've got to think that Nyquist has reached that point in college hockey.  It's curious that the Red Wings haven't been able to convince him to sign a contract.

You know who else has pretty good results?  Riley Nash.  I don't know exactly what went wrong between the player and the team that resulted in Nash getting sent to Carolina for a second round pick, but I have a hard time believing the Oilers got the best of that deal.  Nash at least has the numbers to suggest he could play a top-nine role, and he's old enough to start adding value in the NHL in the very near future.  If Nash was still in the Oilers' organization I would have put him 7th on my portion of the Copper and Blue's Top 25 Under 25.  Had he signed a contract, he probably had a very good chance at starting the year as one of the Oilers' four centers, a job he'll no doubt earn with the Carolina Hurricanes instead.  It's frustrating to watch the Oilers spend two draft picks on a player and have that player develop at a decent clip, only to then send him away for one lower pick once the player in question is ready to help at the pro level.

As for the rest of that draft, the Oilers seem to have done pretty well.  Linus Omark will be in camp this year and will try to establish himself as an NHL player one year too late.  He must be kicking himself for not coming to North America a year earlier.  Milan Kytnar is going into his first year of pro hockey and will be trying to beat out several very talented young centers in his bid to get to the NHL, while William Quist spends another year putting up marginal offense in Sweden's third best professional league (thanks Kenta!).  Which leaves us with Sam Gagner.  When he was drafted, the debate was around whether or not to take Gagner or Jakub Voracek.  So far neither player has shown himself to be definitely the better of the two, but thankfully, both have been very good.  If I were presented with the same decision today, I'd make the same decision that the Oilers did three years ago.