Felt the gravitational pull of the rink again this morning. Nearly put on my new Tool t-shirt acquired at last night's terrific concert (not "new new" you understand, I picked it out of the "Shit We Couldn't Sell Last Tour" bin for the princely half-price of $25) but decided against it. What are the chances of running into a Tool fan at a morning hockey camp? My most optimistic estimate was zero.

So I get to the rink late as usual and start to work my way through the customary mob looking for a spot when I hear a lovely female voice call out "Bruce!!" I'm liking this already, and when I turn around who do I see but the fabulous BlueBelle (a.k.a. Lisa McRitchie), wearing her usual 18-karat smile and, get this, a brand spankin' new Tool t-shirt! A sight for (very!) sore eyes, I can tell you. Turns out she came up from Calgary for last night's concert, then hung around for the morning on-ice session. I met Lisa exactly once before, when we were both guests of David Staples at the Blues game last December, but she's the sort that seems like a lifelong friend right from the get-go. To say she has a sunny disposition would be accurate if only the sun were a little bigger and brighter.

The seats were completely packed again, but this time they'd opened some more room in the far corner so we were able to stake out a standing room spot right in front of the corner glass. Had some extreme close-ups of some of the players and a pretty good view of the action in that one end. We also had handheld-device pics of last night's incredible light show to share during the whiteboard sessions, and a conversation that spent time in Florida and California and Pennsylvania even as it never did really stray away from the Oilers. (Lisa goes on a road trip or two every season.) Both the dialogue and the action in front of us sort of flowed along at their own pace, and for a third day running I found myself not particularly focused on my pre-assigned task of watching specific players but just drinking in the whole scene.

Certainly the scene had its moments, as the grey-sweatered guys spent a lot of time right in front of us. There was one extended 3-on-2 drill where three lines cycled through their turn, with MPS-Lander-Pelss followed immediately by Hall-Vande Velde-Rajala. Puck was zipping around pretty good in both cases, as were the players themselves. Fun times.

For the third day running I saw Jeff Petry real good. Tall and rangy, right-hand shot, seems calm and in control, at first gulp not a lot different than Tom Gilbert was when he turned pro. We can only hope. I've been impressed with his skating, and saw a different aspect of that today during some 2-on-1 drills which Petry played to near perfection, taking away the pass before closing down the puck carrier at the exact right moment.

Today saw the first scrimmage, 4-on-4s with 3 F 1 D as dictated by the numbers of actual players. They took it serious enough that the defenders doffed their red shirts and replaced them with same-numbered blue or grey as the case may be. Enjoyed the sight of Olivier Roy aggressively fielding and forwarding the puck; he was hardly under game pressure (especially during whistle-enforced changes on the fly), I just liked the mindset. Kid likes to handle the puck.

The session wound down with a breakaway/shootout drill, which featured a dazzling goal by Hall, drawing the puck to his backhand at high speed before depositing it top cheese. That drew the best response of the day from the large crowd, challenged only by the reaction to Bryan Pitton's spectacular falling-on-his-face glove grab during the scrimmage.

Unfortunately Teemu Hartikainen spent nearly the entire morning at, or attacking, the other end, so I failed in my promise to Derek to study Harski up close and personal. Maybe tomorrow.

All I got today is a bunch more pics, including a couple generously provided by Lisa, after the jump: 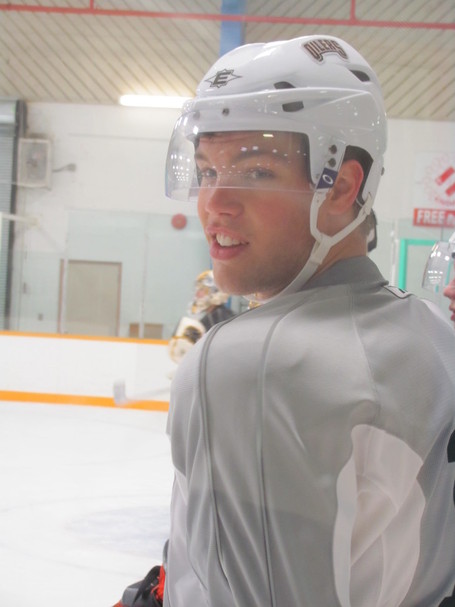 Lisa's photo of Taylor Hall, smiling at us through the glass. Some of us have the knack ... 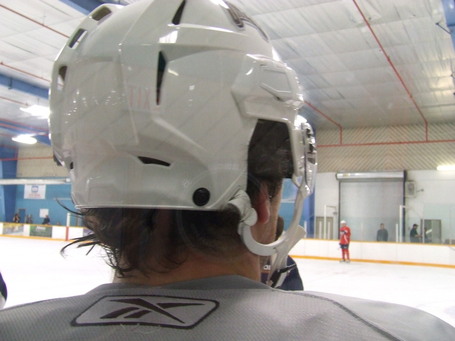 ... and some don't. This is my extreme close-up photo of Magnus Pääjärvi-Svensson. 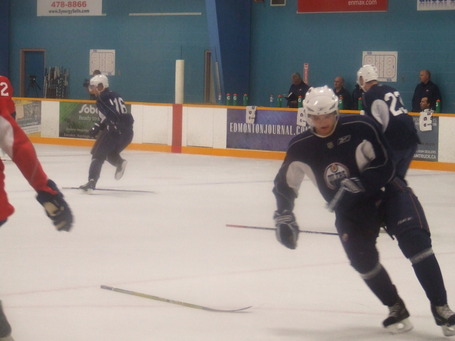 Teemu Hartikainen doesn't trip over his own stick in an agility drill. With skills like this, I say he starts the year in Edmonton. Eh, Derek? 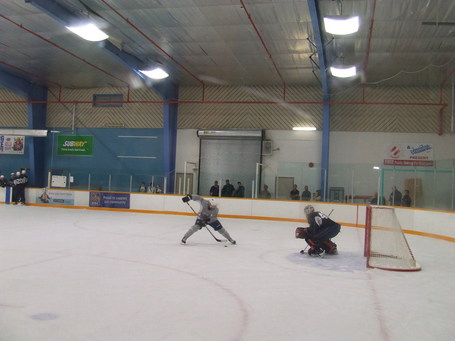 The shootout style drill at the end gave some of the kids a chance to show their A move. This between-the-legs manouevre by one of the scrubs wound up a half second later in an epic fail. 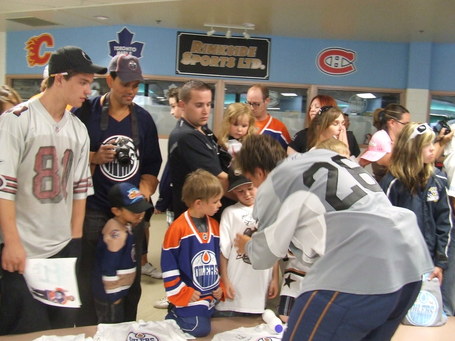 Afterwards some of the prospects, including Anton Lander, came out to sign autographs for the many kids of all ages who waited their turn ... 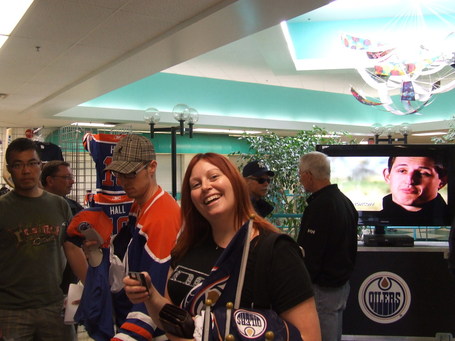 ... while some suckers lined up at the Oilers' Store kiosk to buy bits of cloth and paper for the wannabes to sign. Oh, hi Lisa!  Wouldn't you know but a guy in the line-up noticed Lisa's shirt and started talking to us enthusiastically about the Tool concerts, which he had seen in both Regina Tuesday and Edmonton Wednesday! 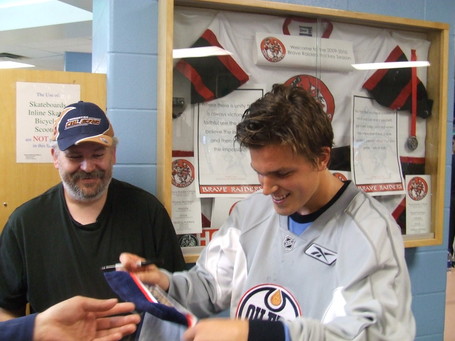 Lander continues to impress the hell out of me; not only is he a good hockey player, he's just a good kid period. He was totally engaged and engaging as he did the rounds. The guy on the left was bugging him about not being in Edmonton this season, and made Anton laughingly promise he would be here to stay in 2011. Let's hope so. 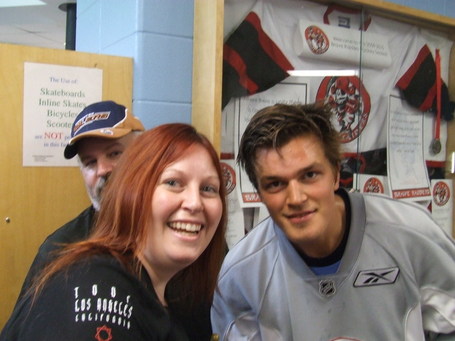 BlueBelle and Anton: My two favourite people of the entire morning.