Short and sweet this time as I was only able to take in the last hour or so of today's workout down at Clareview Arena. Today they had the prospects do the skating drills on the Olympic-sized Arena A before coming across to the NHL-sized Arena B for the remainder of the workout, and I timed my arrival perfectly to beat the crowds traipsing from one to the other.

Once again there was no scrimmage, but a competitive element was introduced to the drills, starting with simple one-on-ones (highlight: Cam Abney standing up Taylor Hall at the blueline and easily dispossessing him of the puck) and gradual increases to the manpower situations from there. The drills became increasingly complex with up to seven men participating at times, including four defenders. Given there were only six blueliners out there, the guys in the red shirts were getting a lot of reps to say the least.

I especially liked how the drills covered a lot of game-type situations, and especially how the focus remained on dishing the puck and getting bodies to the front of the net, with defencemen being heavily involved in the attack. Chatting with the guy next to me - who turned out to be regular Copper & Blue reader Sean Pullen - we agreed that Pat Quinn's camp likely had nowhere near this level of sophistication. Renney's reputation as a systems guy is well-earned if my eyes can be trusted.

The player who consistently caught my eye today was Anton Lander, who had a real jump to his step on seemingly every rush. I also liked what I saw of Abney who seems to be a decent skater. Jeff Petry caught my eye for a second day in a row, and gives the impression of a guy who'll be an NHLer sooner rather than later. Hard to tell without seeing real game situations of course. Sean, meanwhile, was seeing Tyler Pitlick real good, and I have to admit I was impressed in limited views.

I'll provide some more detailed player reports tomorrow when I have a little more time to report. (Off to the Tool concert tonight!) But for me the big story is the response of the Edmonton public. I stuck around afterwards to watch the 200+ people who were hanging around for autographs from second-tier prospects like Chris Vande Velde, Milan Kytnar, Mike Connolly, Toni Rajala and Cameron Abney. Those guys could scarcely believe their eyes at the clamouring throngs. A couple pix from my wonky camera after the jump. 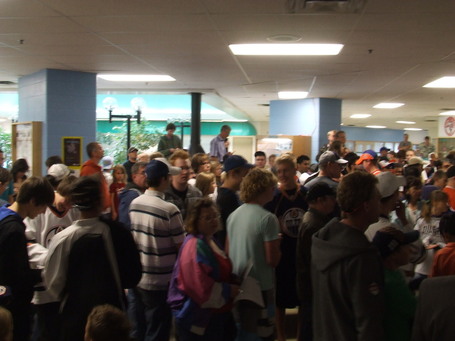 A crowd of 200+ awaits the arrival of Oilers' prospects at the autograph session after the on-ice session. 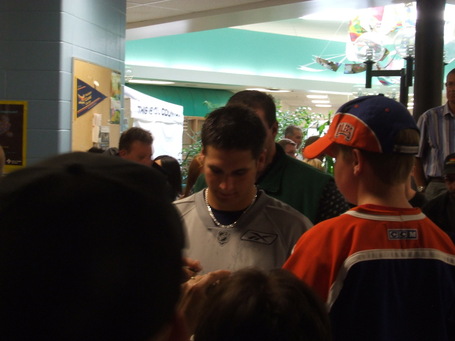 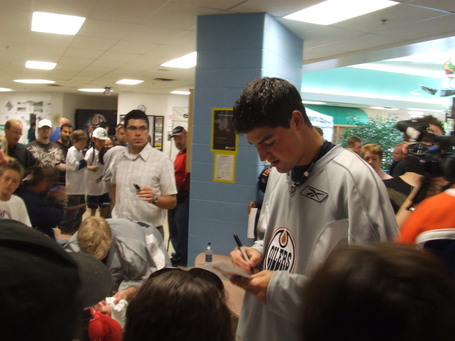 Cam Abney seemed the most comfortable at engaging people as he signed. The blond head leaning over the table in the background belongs to Toni Rajala.