Shot Quality vs. Quantity II - The Playoffs Are Different, Who Knew?

Share All sharing options for: Shot Quality vs. Quantity II - The Playoffs Are Different, Who Knew?

Let's return at long last to the relationship between shots and goals, for and against. In Part I we examined the regular season performance of the last 25 Stanley Cup champions by expressing their outshooting and out-finishing capacities as ratios, as per this simple equation:

Reversing save percentage and expressing it as the other guys' Sh% allows us to compare apples and apples rather than adding goals and saves. One improvement is that empty net goals are counted at both ends of the ice rather than just the one. (That ENG are counted in Sh% but not Sv% is the reason that the league average PDO# in all situations is somewhere around 1.002 rather than the expected 1.000.) The other advantage is that the two percentages can be expressed as a ratio, in the same manner as shots themselves.

A team which converts at a 10.0% rate and holds its opposition to 8.0% isn't just outperforming the other guys by 2%, it's outscoring them by 25% per unit number of shots. Which is pretty significant.

During those 25 regular seasons the Stanley Cup champs, as a group, outshot their opponents by 112%, had a conversion rate that was 113% better, which combined to an outscoring rate of 127%. At face value both appeared to be equal contributors to the success of those teams. However, in recent years the trend has all been in the direction of teams that outshoot (118% to 108% in the last 10 years). That certainly didn't change in 2010, when Chicago did a very reasonable knock-off of the Detroit Model™ - or is that the Bowman Model? - by outshooting their opposition by a whopping nine shots per game.

That said, regular season tendencies and playoff results are not the best of matches. That outshooting monster was not the Chicago team I watched seemingly struggle through the last three rounds of playoffs.

I undertook to dig up the same type of data from the actual playoff seasons in which those Cups were won. I figured it would be weirdly different and interesting, and I wasn't wrong.

One of the things that has happened since Part I was published is a new Stanley Cup champion has been crowned. Given the interest shown in this subject by some of our regular readers who happen to be Blackhawks' fans, I have added a 26th season into the database. Below are the updated original graphs showing regular season performance followed by the same information for the playoff drives of each club.

The first thing that jumps off those graphs at me is the increase in outscoring rates (the solid green line) during the postseason. It stands to reason that outscoring rates in a by-definition-successful run of 20-25 games will outstrip those obtained over the full 82. What's more interesting is how the Stanley Cup champs consistently "rode the percentages" (the dashed red line) during the post season. While no fewer than 6 of the past 15 Stanley Cup champs had a Sh% ratio lower than 1.00 during the regular season, only 1 club across the entire 26 years did so during the playoffs, and that squad by the narrowest of margins (0.999). That exception was the 2009 Pittsburgh Penguins, who we'll examine in more detail shortly.

Meanwhile, outshooting (the dotted red line) is important, but not as important. No fewer than 6 Stanley Cup champs were outshot during the playoffs, including a remarkable 4 in a row in the early '90s, as well as two just before the lockout. Meanwhile, it is worth noting that since the '80s Oilers and early-'90s Penguins made a regular season habit of winning without outshooting, that 17 of the last 18 Stanley Cup champs have outshot their opposition during the season. The exception? Again, the 2008-09 Pittsburgh Penguins, a squad that seemingly switched its entire MO between the regular season and playoffs.

Let's look at the same data in tabular form. Below are three sets of three columns. The first two solve for (SF:SA) * (Sh%F:Sh%A) = (GF:GA) in both the regular season and playoffs for the last 26 Stanley Cup champions, while the third set compares how each team's results in each category changed during the post-season: 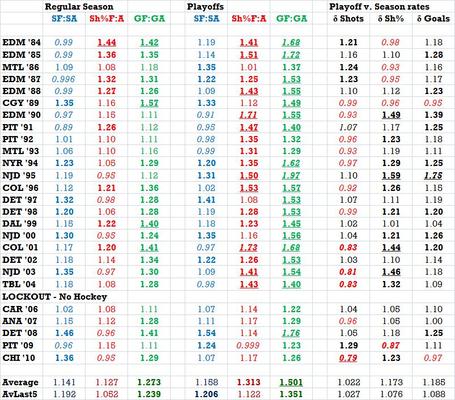 Without getting too caught up in my propensity for bolding, underlining, italicization, etc., I'll summarize by pointing out I have added increasing degrees of emphasis for performances that exceed 1.2, 1.4, and 1.6, or fall below 1.0, .0.9, and 0.8.

Starting from the top, it's interesting to see how the Gretzky-era Oilers, marginally outshot during each regular season and then greatly improved their outshooting rates in the post-season, while ~maintaining their already outstanding conversion rates. The combination was lethal, as the Boys on the Bus outscored their opponents by more than 50% in each of their Stanley Cup triumphs. Certainly this data supports the notion that the Oil turned it up a notch or three in the playoffs.

That improvement in post-season shots performance was yet another way that the Oilers strayed from what has since become the norm. The 26-year average shows that championship teams marginally improve their outshooting rates from 14.1% to 15.8% in the postseason, with more than all of this increase accounted for by the Gretzky Oilers; since 1989, Stanley Cup champs have seen their outshooting rates actually decrease in the playoffs, by almost 2%. However, the successful playoff teams experienced a massive improvement in their conversion rates, collectively raising their outperformance in shooting percentages from 12.7% all the way to 31.3%. If percentages are luck-driven, then Stanley Cup champions are collectively a very lucky bunch indeed! Of course, we already knew that on some level.

Over the 26 years detailed here, the Stanley Cup champs have collectively outscored their opposition by a whopping 50% during the playoffs, with roughly a third of that advantage gained through outshooting and the other two thirds through better conversion rates. As mentioned above, some of this is driven by sample size, and a lot more of it by selection bias (only Stanley Cup champions need apply). In a future installment of this series, I will look at teams that succeeded during the regular season and failed in the playoffs.

First though, let's examine playoff performance over the 5 years since the lockout. It seems the playoffs have become much more competitive, as the four lowest GF:GA ratios over the entire period under review have happened in the past 5 years. Only the powerhouse Red Wings of 2008 can be said to have dominated their playoff opposition.

The Hurricanes of 2006 are arguably the weakest Stanley Cup champion of the entire period, with the lowest playoff GF:GA ratio (1.22) and the second-lowest such ratio (1.109) in the regular season. Carolina were slightly above average in both outshooting and conversion rates during the season, and marginally improved both in the playoffs, but were a long way from being a dominant team.

Another relatively weak champ judging by this metric was the 2009 Penguins, who had the lowest regular season GF:GA ratio (1.107), and the second lowest in the playoffs (1.23), with both numbers very similar to those '06 'Canes. As noted above, the Penguins underwent a sea change in how they went about their affairs, improving their outshooting rates by 29% in the playoffs but seeing their conversion rates drop by 13%, by far the biggest such reduction of any champ, and the only drop of any amount in the last 20 years. Those Penguins are a real outlier on both sides of the equation: the only team on the entire list whose conversion rate was (ever so slightly) below 1.0 in the postseason, and the only champ in the last 18 seasons to be outshot in the regular season. Several factors were at play here, including the firing of Michel Therrien, the drastic changes instituted by both Dan Bylsma and the much happier players under him, and the return late in the season by Sergei Gonchar.

Finally we have the odd case of the 2010 champs, the Chicago Blackhawks, who were major outshooters during the season, but saw their advantage in this respect crash from 136% to just 107% in the post-season. The Hawks made up most of that difference by increasing their conversion rates by 23%, going from subpar in this respect to very good (though not great). The Hawks were just the second team in the entire 26 years who outscored their opponents by a lesser margin in the playoffs than they did in the regular season, the other being the '89 Flames who probably deserve more respect for being a truly dominant team during their one (1) title run.

Let's end by looking at two scattergrams plotting outshooting/conversion rates of the 26 Stanley Cup champs under review here. The first such graph is new and improved from the one that appeared in Part I, with colour coding now entering the mix: 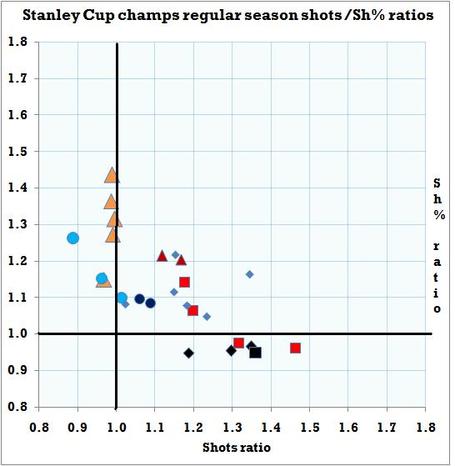 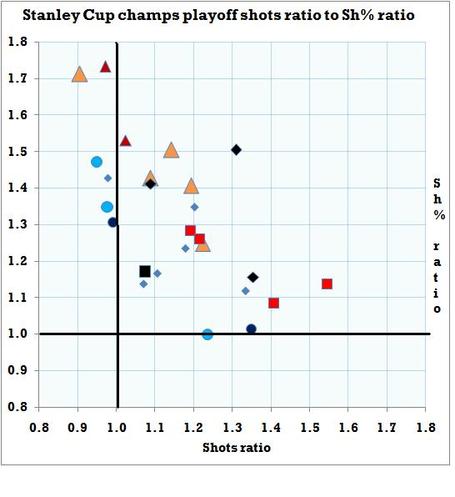 As a group, it's interesting to see how some teams have been successful despite being on the wrong side of the solid black vertical line representing a shots ratio of 1:1, while collectively the entire data set rises above the solid black horizontal line representing 1:1 conversion rate. It would seem that playoff success is founded first and foremost in making your shots count.