One tool that is often used when evaluating prospect is NHL Equivalencies, a method developed by Gabe Desjardins to help in evaluating the scoring talent of players from various feeder leagues.  Desjardins writes:

It is rare that a player plays significant time in two leagues in the same year, but players often play in one league in one year and another the next. With a large number of such players, we can then estimate the quality of each league using the ratio of the player’s PPG in each year.  What we are most interested in is what one point in a given league is equivalent to in the NHL – in other words, the league equivalency.

By using this method Desjardins has calculated league equivalencies for a wide array of feeder leagues.  However, my understanding is that the last time the equivalencies were updated was in 2005, i.e. prior to the lock-out.  After the jump, I will use a similar method to that of Desjardins for data between 2006-07 and 2009-10 to see if the strength of various feeder leagues has changed over time.  I decided to exclude 2005-06 from the data because scoring levels in the NHL were much higher in 2005-06 due to so many more power play chances and because the level of various other leagues in 2004-05 was skewed because of NHL players being dispersed due to the lockout.

My methodology was slightly different than that of Desjardins.  Rather than taking all players who moved from one league to another, I decided to use only forwards and only those players who were considered rookies in the NHL and played at least 40 NHL games.  I then compared their point per game results from their rookie NHL season to the results achieved in their previous season in another league.  I only included players who played in a minimum of 25 games in their previous league.

The first league I'll look at is the AHL because that's the league .  One thing that Desjardins mentions in his own work is the impact of age on NHL equivalency.  Young players are still improving, so a point-per game in the AHL at 20 is more valuable than the same total at 22 or 23.  As such I've broken the equivalencies down by age as well as giving the total. The "NHLE" columns represent the ratio of AHL offence that was attained in the NHL in the following season in terms of points per game.  So if a player scored 1.10 points per game in the AHL in one season and then 0.55 points per game in the NHL in the following season, the NHLE value would be 0.50 (0.55/1.10).  I also included both an average and a median level since the two values sometimes differ.  It seems to me that the median is likely the better predictor of true "average" performance.

Desjardins' previous value for the AHL was 0.44 which is very close to the median level for all AHL players and slightly lower than the average level.  The high and low values are also important because they serve as an important reminder that these equivalencies are estimates.  Even though we might say that the equivalency is 0.44, there are still players like T.J. Galiardi - he's the dude at 1.36 - that blow the projection out of the water.  In terms of reasonable expectations, 80% of the 74 players had an NHLE value between 0.78 and 0.23, which is still a fairly wide range.  Finally, we also see the impact of age on NHLE with strong AHL results achieved at age 20 being far more likely to translate well than results at an older age.  It comes as something of a surprise to see the age effect level off so quickly with age 21 AHLers not bringing much more offense than older players.

Before I get into the junior leagues and NCAA, I did want to briefly mention the European leagues.  Unfortunately, very few players have come over to the NHL as rookies directly from the various European leagues over the last four seasons.  There were only three players from the KHL, five players from the SEL - including Anze Kopitar, whose translation was 1.99 making the same jump as Magnus Paajarvi-Svensson!  So let it be! - and one player each from the SM-Liiga, the Czech Extraliga and a Swedish Junior League.  As such, the data probably isn't helpful in determining league strength for European leagues.  This could probably be done more effectively comparing European leagues with one another and with the AHL.

Off to the junior leagues!  My understanding is that the WHL is generally thought of as the toughest league to score in, so we would then expect scoring from the WHL to translate better than the other junior leagues.  Is that what's happening? 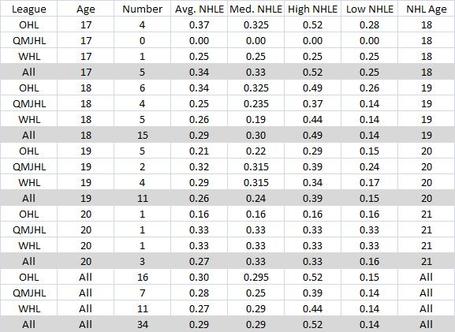 It seems to me that the old saw doesn't hold up all that well.  Both the number of players that make it straight to the NHL and, to a lesser extent, their ability to carry their offense, it seems like the OHL is probably the best of the junior leagues, followed by the WHL and finally the QMJHL, results that are very similar to what Desjardins found prior to the lockout.  This is good news for Oiler fans as it pertains to Taylor Hall and bad news as it pertains to Jordan Eberle.  The age effect is similar.  Thus, Eberle's 106 points in 57 games seem likely to result in an NHL result lower than the overall median while Hall's 106 points in 57 games are likely to be a bit higher than the overall median should both players get to play in the NHL in 2010-11.