Did you know that the Edmonton Oilers had the best playoff winning percentage since the lockout at the start of last season?  Crazy, eh?  Well, not any more!  Those darned Chicago Blackhawks have taken over first place.  First Khabibulin, now this!  Here's hoping those jerks get knocked out in the first round next Spring.  Since the Oilers probably aren't going to make the playoffs, that should be enough to put Edmonton back on top.  The full list of playoff win-loss records and winning percentages after the jump, but for those who like trivia, try to guess the twelve teams with more playoff wins than the Oilers' total of fifteen. 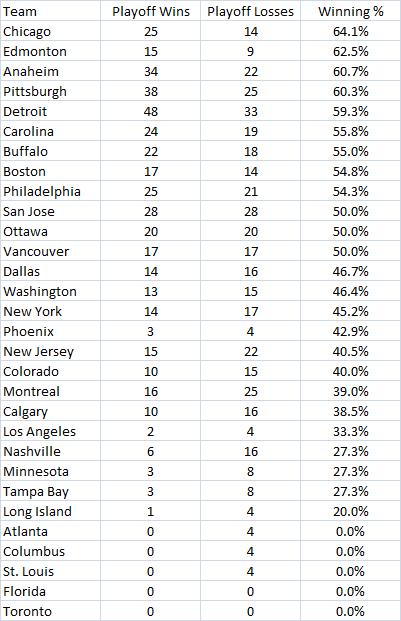 Poor Nashville.  That's a lot of playoffs with not much success.  Only the Calgary Flames have played more playoff games without at least one series victory... :) :) :) ...  As for Edmonton's current futility, the two teams at the bottom of this chart prove that things can always be worse.